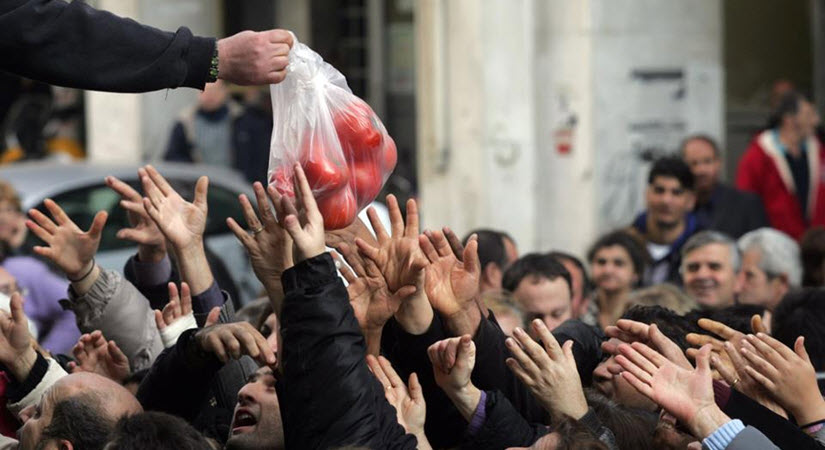 You’ve read about housing market bubbles, stock bubbles, and even credit bubbles. But the next bubble you’re about to discover could be even more dangerous, and may have even more far-reaching consequences.

It’s called a food price bubble, and it’s been inflating under our noses since March 2020. You can also see the dangerous trajectory it’s on compared to three previous years in the FAO chart. 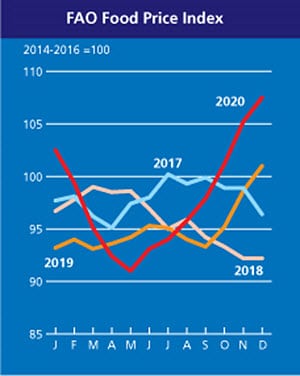 The official January 7, 2021 release from the Food and Agriculture Organization explains the chart above in more detail.

And according to a Business Insider piece, grain has risen in price 50% over the last six months while other commodities like industrial metals are starting to drop in price.

In fact, according to an official source, food price inflation has risen each month by at least 3.5% (year over year) since April 2020 both at home and away from home.

And December didn’t show any signs of that trend letting up, with a price increase of 3.9% over December 2019. Keep in mind, we’re talking about food here. Technically this price surge isn’t a bubble ‑ it’s inflation.

This is exactly what we expect to see when the Fed’s loose-money policies support bubbles in the housing, stock and credit markets. An excess of currency chasing a fixed supply of paper assets inflates prices, which isn’t a big problem as long as the feeding frenzy stays contained in the paper asset markets. So long as amateur day-traders stick to playing stock-market roulette with the likes of Tesla and GameStop, the day-to-day world can go about business as usual.

Eventually, though, those inflated prices spill out of the financial sector. Newly-minted bitcoin billionaires and those who’ve profited from the Robinhood lottery take some cash out and start spending it on tangible goods.

Price increases on such a core necessity affect everyone – and represent a dangerous escalation if they get out of hand.

Albert Edwards, Société Générale’s market strategist and a notorious market bear, claims the Arab Spring in 2011 and other episodes of violent civil unrest were tied to food prices that got out of control:

Many economists believe high global food prices from the end of 2010 were the trigger, Edwards said, highlighting that high food prices also contributed to the French and Russian revolutions, as well as the 1989 unrest in China.

Riots over food prices have occurred with depressing regularity throughout history. You might remember the last time the world saw widespread unrest thanks to food price inflation – during the run-up to the Great Recession, America’s last big asset bubble.

This time we aren’t talking about third-world countries. Almost 15% of Americans (that’s almost 1 in 6) could go hungry, thanks in part to state government mitigation efforts in response to the pandemic.

Even billionaire investor Ray Dalio reports that the U.S. could be on the brink of some kind of major civil conflict. In Chapter 9 of his book The Changing World Order he claims we are at stage 5 of 6, which is the stage just before a civil war or revolution disrupts the old regime.

After that, he claims the cycle starts again at 1, and the whole process “typically takes 100 years, give or take a lot.”

That leaves a lot of uncertainty about the near future. It’s been about 155 years since the last U.S. Civil War, the only one we’ve seen throughout our nation’s 250-year history. Of course this might not happen at all.

There’s a lesson in the famous John Maynard Keynes quote, “The market can stay irrational longer than you can remain solvent.” The same basic idea applies here: a bad situation can hover on the brink of catastrophe without toppling into utter disaster for far longer than even the sharpest analysts could guess.

If we’re truly fortunate, these apocalyptic visions remain in the realm of fantasy.

In the meantime, the best thing you can do right now is not to dwell on black swan scenarios, but to take the steps necessary to ensure you and your family will thrive regardless of the rest of the world’s situation.

Step back from the brink and gain control

Take a deep breath and assess your situation. Do what you can to make yourself and your family resilient to market forces and government whims. No matter what happens to food prices tomorrow, you can put yourself in the best position possible before things go sideways.

From an economic perspective, that means taking a few minutes to examine your nest egg. Consider your exposure to risk levels, and diversify any assets as you see fit. That can include shifting some of your savings into precious metals like gold and silver. When the paper asset markets catch fire and the inferno spreads, tangible physical assets endure – and shine even brighter amid the ashes.