And unless you’re from the Florida Panhandle, I imagine you haven’t heard of Quincy, Florida, either.

But the two can teach us a lot about investing.

One thing Munroe noticed was no matter how hard the times, the people of his small town always seemed to have money to buy a Coca-Cola.

So he started buying shares of the company. Not long after, he was telling everyone in town to buy shares of Coca-Cola.

When shares crashed 50% during a conflict with the sugar industry, Pat kept telling people to buy Coca-Cola.

And then the Great Depression hit.

Keeping Your Eye on the Long-Run

From September 1929 to July 1932, the Dow Jones Industrial Average lost 89% of its value. But something remarkable happened.

As Munroe had learned early on, people would spend their last nickel on a Coca-Cola.

And since the company had $6.5 million in cash—over $100 million in today’s dollars—and no debt prior to the crash, Coca-Cola had no problem paying its dividend.

For the people of Quincy, that meant they could keep their heads above water.

Once the economy recovered, Munroe and his town continued to buy shares of Coca-Cola.

And Coca-Cola shares continued to surge.

By the late 1940s, Quincy, Florida became the richest town per capita in the entire United States.

Munroe’s sage advice in the 1920s had minted 67 “Coca-Cola Millionaires” in Quincy, Florida.

And many of these early investors still hold their shares today.

At least I hope they still do; a single share with dividends reinvested bought pre-Great Depression would be worth over $10 million today.

There are a few lessons to be learned here.

The first is investors should focus on well-capitalized companies that pay steady dividends. When reinvested, these slow-growth companies can earn investors big money over the long haul.

Second, you want to buy into companies that can sell their products no matter what’s happening in the economy.

Lucky for you, I found a company that does just that.

Smartphones: The Opiate of the Masses

While soft drink sales are stagnating, there is a new guilty pleasure for the public: smartphones.

It’s no secret that people are addicted to their phones.

Whether they’re strolling down the sidewalk, driving a car, or out to dinner with friends, just about everyone seems glued to their phones.

And the companies who provide the underlying infrastructure for these phones are sure to keep profiting, even in a bear market.

There’s only one company that pays a dividend over 6.4% and supplies smartphone infrastructure.

The company connects more than 100 million devices, including over 80 million prepaid phones.

All in all, its wireless business accounts for 43% of AT&T’s sales.

The company also has a consumer and entertainment segment. This area brings in 32% of sales and includes its DirectTV satellite television business and WarnerMedia.

AT&T has several things working in its favor.

The first is how diverse the company is. Unlike its main competitor Verizon Communications Inc. (VZ), AT&T has its hands in a strong mix of services.

The company gets most of its income from its wireless business. This gives the company a steady stream of cash that will grow as more people use smartphone data.

AT&T has been growing its content division, buying DirectTV and Time Warner in the last three years.

AT&T is also set to be the first provider to roll out 5G technology. This next generation of wireless technology will be 1000X faster than today’s 4G.

Not only will more data be flowing over AT&T’s system, but it will own much of the data as well.

AT&T Is a Bargain Now

The stock now trades at 30.7, which is a cheaper valuation than its peers on nearly every measure. 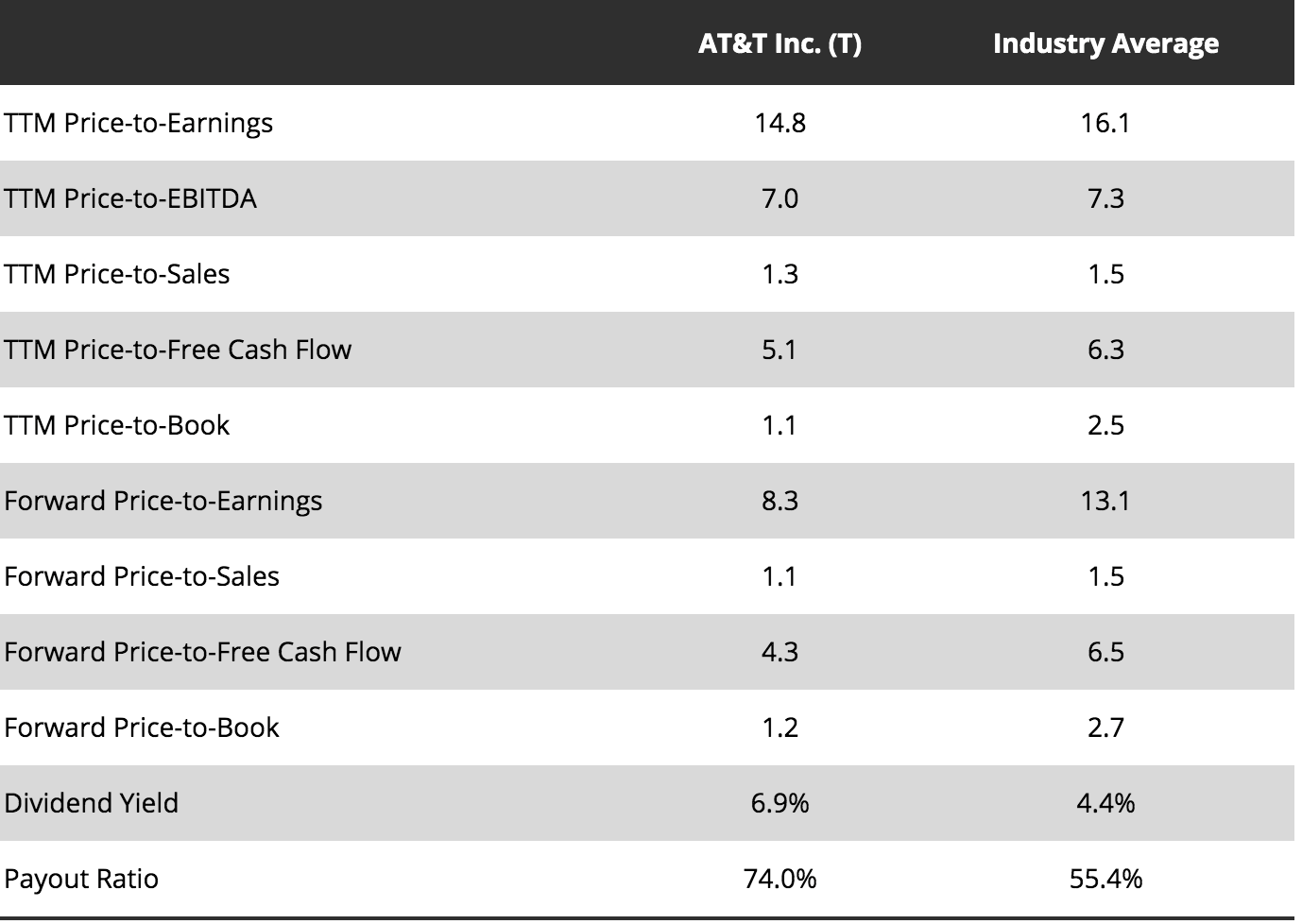 And yet the company pays a much higher dividend yield.

Better still, AT&T has raised its dividend for 35 years in a row. 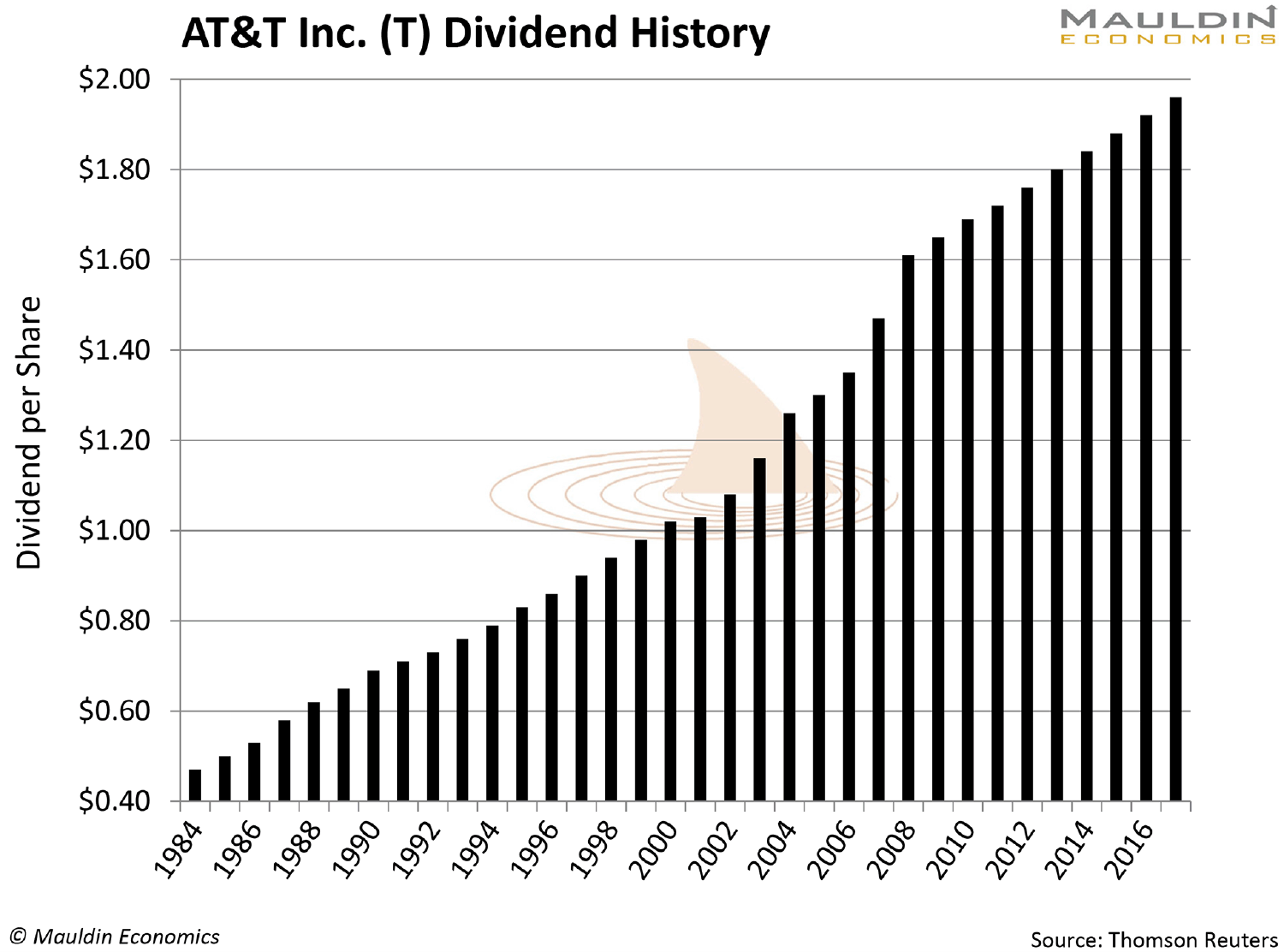 A company that earns tons of cash, pays a 6.4% dividend, and has a payout ratio below 80%… that’s how you know you’ve got a bargain.