In a New York Times interview Dec. 6, 1921, Thomas Edison
advocated financing the proposed Muscles Shoals Dam
by issuing currency instead of debt (bonds.) They are
identical promises to pay, but currency does not incur debt
or  interest. Thus Edison exposed the whole
central banking fraud which holds humanity in bondage.
Politicians, corporations, professors all shill for the central banking cartel which
produces the medium of exchange (currency, credit) as a debt to itself.
(Governments are perfectly capable of doing this debt-and-interest-free.) The bankers
must enslave humanity in a world police state (globalism) in order to protect this racket.
“On the point of Mr. [Henry] Ford’s suggestion to the Government for financing the completion of the dam, Mr. Edison reiterated his belief … that it was a good plan and that if only the currency method is tried in raising money for public improvements, the country will never go back to the bond method.
Now, as to paper money, so-called, everyone knows that paper money is the money of civilized people. The higher you go in civilization the less actual money you see. It is all bills and checks. What are bills and checks? Mere promises and orders. What are they based on? Principally on two sources – human energy and the productive earth. Humanity and the soil – they are the only real basis of money.

“… There is just one rule for money, and that is, to have enough to carry all the legitimate trade that is waiting to move. Too little or too much are both bad. But enough to move trade, enough to prevent stagnation on the one hand and not enough to permit speculation on the other hand, is the proper ratio.
“Then you see no difference between currency and Government bonds?” Mr Edison was asked.
“Yes, there is a difference but it is neither the likeness nor the difference that will determine the matter; the attack will be directed against thinking of bonds and currency together and comparing them. If people ever get to thinking of bonds and bills at the same time, the game is up. 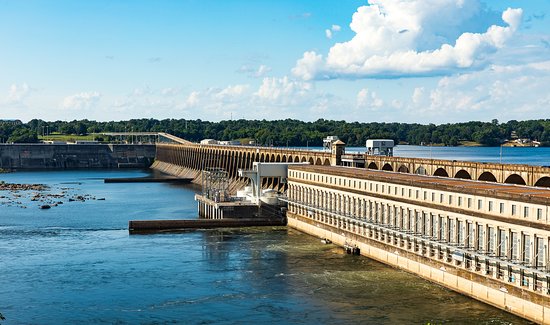 “Now, here is [Henry] Ford proposing to finance Muscle Shoals by an issue of currency. Very well, let us suppose for a moment that Congress follows his proposal. Personally, I don’t think Congress has imagination enough to do it, but let us suppose that it does. The required sum is authorized – say $30,000,000. The bills are issued directly by the Government, as all money ought to be.  When the workmen are paid off they receive these United States bills. When the material is bought it is paid in these United States bills. Except that perhaps the bills may have an engraving of a water dam, instead of a railroad train and ship, as some of the Federal Reserve notes have. They will be the same as any other currency put out by the Government: that is, they will be money. They will be based on public wealth already in Muscle Shoals, and their circulation will increase that public wealth, not only the public money but also the public wealth – real wealth.
“When these bills have answered the purpose of building and completing Muscle Shoals, they will be retired by the earnings of the power dam. That is, the people of the United States will have all that they put into Muscle Shoals and all that they take out for centuries – the endless wealth-making water power of that great Tennessee River – with no tax and no increase of the national debt.” [Emphasis added – Tony B.]
“But suppose Congress does not see this, what then?” Mr. Edison was asked.
“Well, Congress must fall back on the old way of doing business. It must authorize an issue of bonds. That is, it must go out to the money brokers and borrow enough of our own national currency to complete great national resources, and we then must pay interest to the money brokers for the use of our own money.
Old Way Adds to Public Debt
“That is to say, under the old way any time we wish to add to the national wealth we are compelled to add to the national debt.
“Now, that is what Henry Ford wants to prevent. He thinks it is stupid, and so do I, that for the loan of $30,000,000 of their own money the people of the United States should be compelled to pay $66,000,000 – that is what it amounts to, with interest. People who will not turn a shovel full of dirt nor contribute a pound of material will collect more money from the United States than will the people who supply the material and do the work. That is the terrible thing about interest. In all our great bond issues the interest is always greater than the principal. All of the great public works cost more than twice the actual cost, on that account. Under the present system of doing business we simply add 120 to 150 per cent, to the stated cost.

“But here is the point: if our nation can issue a dollar bond, it can issue a dollar bill. The element that makes the bond good makes the bill good, also. The difference between the bond and the bill is that the bond lets the money brokers collect twice the amount of the bond and an additional 20 per cent., whereas the currency pays nobody but those who directly contribute to Muscle Shoals in some useful way.
“If the Government issues bonds, it simply induces the money brokers to draw $30,000,000 out of the other channels of trade and turn it into Muscle Shoals; if the Government issues currency, it provides itself with enough money to increase the national wealth at Muscle Shoals without disturbing the business of the rest of the country. And in doing this it increases its income without adding a penny to its debt.
“It is absurd to say that our country can issue $30,000,000 in bonds and not $30,000,000 in currency. Both are promises to pay; but one promise fattens the usurer, and the other helps the people. If the currency issued by the Government were no good, then bonds issued would be no good either. It is a terrible situation when the Government, to increase the nation’s wealth must go into debt and submit to ruinous interest charges at the hands of men who control the fictitious value of gold.
“Look at it another way. If the Government issues bonds, the brokers will sell them. The bonds will be negotiable; they will be considered as gilt-edged paper. Why? Because the Government is behind them, but who is behind the Government? The people. Therefore it is the people who constitute the basis of Government credit. Why then cannot the people have the benefit of their own gilt-edged credit by receiving non-interest bearing currency on Muscle Shoals, instead of the bankers receiving the benefit of the people’s credit in the form of interest-bearing bonds?” 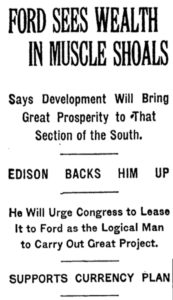 Says People Must Pay Anyway
The people must pay anyway; why should they be compelled to pay twice, as the bond system compels them to pay? The people of the United States always accept their Government’s currency. If the United States Government will adopt this policy of increasing its national wealth without contributing to the interest collector – for the whole national debt is made up of interest charges – then you will see an era of progress and prosperity in this country such as never could have come otherwise.”
“Are you going to have anything to do with outlining this proposed policy?” Mr. Edison was asked.
“I am just expressing my opinion as a citizen,” he replied. “Ford’s idea is flawless. They won’t like it. They will fight it, but the people of this country ought to take it up and think about it. I believe it points the way to many reforms and achievements which can not come under the old system.”
(Thanks to Tony Blizzard)
Related- Accept Servitude, says Banker
Banking System is Key to Understanding Our Servitude
First Comment from Stephen Coleman:
Great article. The First National Bank of the United States set up by Hamilton was such a bank that issued credit for the building of infrastructure, agriculture, mining and manufactures. This bank flew in the face of our British imperial enemies. The bank had later been corrupted and taken over by the central bankers that were tied to the City of London’s imperial banking system.
Lincoln revived the system and took a hopelessly bankrupt nation and in 5 years transformed the US into the world’s leading economy while simultaneously fighting it’s bloodiest war and a financial war against the City of London. London fixed the price of gold against the value of the Greenback in Europe, effectively making importing to the US prohibitively expensive, if not impossible.
Under such a credit system speculation is illegal and will get it’s practitioners stiff prison time.
Kennedy began to issue silver certificate currency under the same idea, but the powers behind the scenes had him assassinated for this and for his opposition to the war in Vietnam.
The most ironic situation today is that China has adopted a system based upon Hamilton’s First National Bank. China today has brought over 800 Million people out of dire poverty in the last 40 years. China is building great infrastructure projects throughout south Asia, southeast Asia, Africa and South America. They are offering much lower interest than the western banks, plus they are overseeing the projects to keep control of corruption that is so rampant in the 3rd world. What China is doing is historically unprecedented.
China in a few more decades will be the world’s leading economy. All of Trump’s efforts are misguided and doomed to fail unless he takes down the FED and replaces it with a similar institution, joining with China and Russia to once and for all eliminate poverty and war.
Russia is heading in the same direction with Sergei Glazyev, minister of the economy fighting for a national bank for over several decades. China and Russia are too big to bomb back to the dark ages as the US did to Iraq and Libya.
This is the main reason for the West’s sabre rattling against China and Russia. Such a banking system is a direct threat against the survival of the Wall Street/ City of London world economic dictatorship. And such a system doesn’t deserve to survive and it’s leaders need to be hung as war criminals and enemies of the people of this entire planet.
See also  Inflation Then Deflation? Evidence From Banking (Lowest Bank Lending To Deposit Ratio Since The 1970s)
See also  Rep. Thomas Massie blasts Fauci, CDC for Coronavirus “Coverup”... Senator Rand Paul warned this past weekend that scientists dismissing the Wuhan lab leak theory have extensive conflicts of interest
2,211 views