The Alternative News Media community is deeply divided at this time, and I find it extremely sad that this division has occurred due to a PsyOp from within.  Most of you are familiar with the QAnon movement consisting of true Patriots, who have been led by QAnon the Pied Piper.

The YouTube community became totally fixated on the false prophet, QAnon.  I cannot begin to count the number of YouTubers, who reported on each “drop” of information the fake entity revealed.

He/she/them made endless errors, such as Hillary Clinton had been arrested and was wearing an ankle monitor, and it became gospel which should not be questioned.

If one did question the gospel of Q, one was immediately attacked – this I know for a fact.  It was plainly not acceptable to question Q. Follow the “plan,” do not question or doubt, and have “faith.”

Errors could always be explained, if you asked the QAnon believers. There was always a reason if Q ended up being wrong, and the reason was never Q’s fault.  Just do not question the “plan.”

Mainstream media has now gotten involved by reporting on the revelation that Q is fake.

This is a very embarrassing time for Alternative Media, as now that Q is getting public traction, it is becoming all the more apparent that Q followers thought they were fighting the Deep State.  If it were not so sad, it would be hilarious.

I, myself, am angry at those who were on the inside from day one, who knew it was not completely what it was portrayed to be – YET the supposed “truthers”  moved ahead with the excuse it was a good thing.

Sad beyond sad – they even said they were “red pilling” those, who were not yet awake as they were.  Now it seems those who were awake did not swallow the pill QAnon was giving.

I have to commend those, who were Q believers, until recently they red-pilled themselves and are speaking out now.

One of those YouTubers is Isaac Green.  If you take the time to watch his following video, you will be on the inside of the truth about QAnon.

Shout out to David Seaman, Lift the Veil, Unirock, and 0h0ur1 for standing up for the truth.”

Then we have Defango!  He is the man I follow, and he is the man who created the QAnon “truth pill,” which I hope many will ingest quickly.  Here is Defango’s video exposing QAnon as a fake.

The State of Qanon, The Fall begins with Questions. Cicada 3301 has spoken and now all of a sudden Q is being “attacked”. Do you see what is happening now?

Many questions. Only a few answers. Now that we have looked at everything we already know what the predictions were and even pointed out how things would follow. Currently we haven’t been off on a prediction and it’s take 4 months for the information to cycle the web to become relavant. How crazy is that.

All the Qanon Posts

In the following video, we have another YouTube truther, who gives a big thanks to Defango.  His name is Titus Frost.

“It happened folks Boom and just like that the Qult of Qanon was dead. Santa Claus is not real yet no matter how many times adult tell children the truth, new children every year fall for the lie. Well if you are watching my channel you should be an adult and know that Q just like Santa is fake.

For the Qtubers and believers, there is a 24/7 live feed you can go watch till your brain rots out of your skull. Just go over there like the Flat Earth live feed and live in your never ending maze of bs.

Also remember that Defango was the one who exposed all this a long time ago. A ton of people are being given credit for what he really exposed months ago and no one listened. Well now, months later everyone is “exposing” what Defango already said like five months ago and I reiterated to my audience in my Show STWT over 5 months ago.

I am here to tell people the truth, not build up an audience of closed minded mislead people.

Special shout outs to all those who spoke the truth about Q Anon. Unirock, Lift The Veil, Roy Potter, Anti-School, David Seaman, and everyone else you know who you are. Much love out there.

Let’s talk about how all of this began.

In 2012, the following message appeared on 4chan –

“Hello. We are looking for highly intelligent individuals. To find them, we have devised a test.

There is a message hidden in this image.

Find it, and it will lead you on the road to finding us. We look forward to meeting the few that will make it all the way through.

The following article explains the QAnon phenomenon better than I ever could; therefore, I want to share it with you –

Why does Cicada matter in regards to QAnon? –

Because some believe that the Cicada puzzles, like the GCHQ “Can You Crack It?” contest, are a recruitment operation for Deep State agencies. (It’s not that much of a crazy idea; the Navy thought all of it was so cool it made its own, called Project Architeuthis.)

Because according to information released in January, Cicada was behind QAnon all along.

Those who make a habit of “thinking like the wolf,” whether as part of their profession or as a valued aspect of their mental preps, already see where all of this is going, and it’s not good.

People need to believe in things; they need heroes and leaders. This phenomenon is near-constant in many movements such as the patriotic or liberty movement. “If __________ told me it was time to take up arms,” one person told me bluntly in 2015, “then I’d be on it in a heartbeat.” People gravitate to personalities, and once that loyalty is established then it clouds all judgment, all critical thinking, all coherent thought and decision-making capability.

QAnon–and the people/agencies/entities behind “him”–were able to do what they did because of the following things:

The above list is Sheephood. Those who fit the above actions or traits are not acting independently or even coherently. They’re ripe for manipulation, control, or co-opting.

There are a lot of people sheepishly eating crow when it comes to QAnon because they’re having to accept that they got played–and they don’t even technically know by whom because no one really knows what or who is behind Cicada (although deduction can probably get you fairly close). Some of them are stepping up, accepting that, and taking the lesson to move forward with better ways of parsing truth in the future. Some, however, are still making excuses, or they’re attacking the people who dared to call it early.

I’ll leave it up to you to figure out which group is worth something.

Another YouTuber, Left The Veil, has worked very hard to get to the truth of QAnon.  Here is the latest on his ongoing investigation.

“They’re “herding the cattle!” and guess what, you’re it. FF was good at doing this, along with P and B. We all did it but some were just better at it than others. These aren’t Anons that “Q” is responding to, not the majority of them anyway, and if “Q” is responding to a so called “Anon” I can assure you that 90% of them are members of the crew; we all had roles to play. This is one of the big benefits to these types of message boards. All for a LARP aright, but one that pays well! Speaking of paying, also pay close attention to the post ID numbers. Log them and track them even. Go back to the archives and search out these ID’s. Follow them and you’ll see what I mean.

You’ve already uncovered the other archives that I mentioned but you’re only scratching the surface in terms of who really is involved and what all went down. I told you the facts. Don’t buy wolf tickets! There is still a lot going on behind the scenes that you guys aren’t catching. I recently heard the BS that T, and B is trying to tell you and others, but it’s all lies they continue to spread! I have no reason to lie, and it feels good for once. You should try it Baruch!

A message to you T and B – I have no respect for you until you admit your involvement.”

I hope that you reading this article will understand the possible ramifications of this PsyOp.  I want to talk about the huge number of indictments Q spoke about. 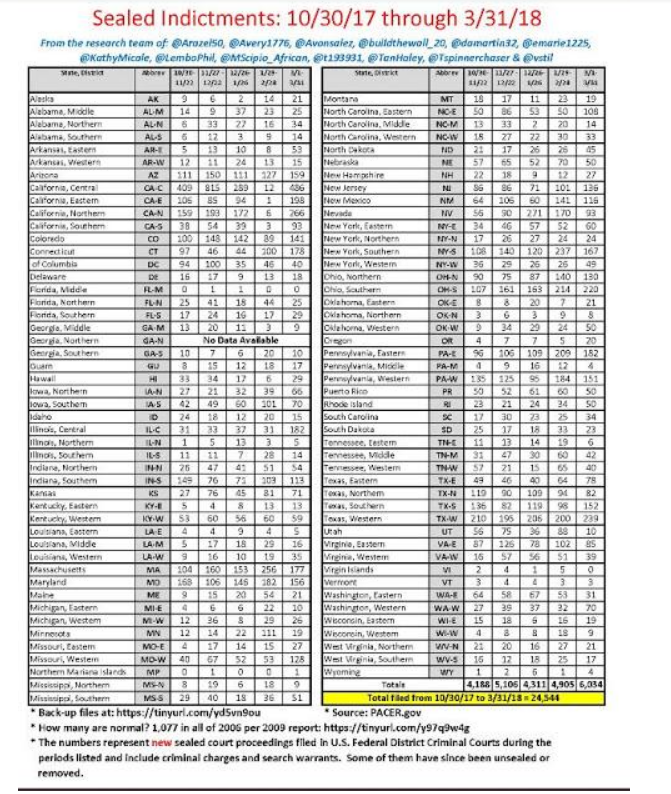 We have just recently found that several of those indictments were for Alex Jones and Roger Stone of Infowars.

They are preparing for that now.

But who are the rest for?

Have the Patriots been lured into a trap so evil that no one has even recognized?  Further has Alterative Media been baited by QAnon?

It is so sad that we are divided and have become the butt of a joke in Mainstream Media.  Better days have to come.