I’ve been waiting for the recent spike in T-bonds in the U.S.

Imagine locking in a near 5.5% interest rate for 10 years and then watching your bonds appreciate as rates fell! Talk about the fixed income trade of the century… like a bond orgasm!

Treasury bonds roughly doubled in total returns in the 1930s when everything else (except AAA corporates) was crashing – stocks, high yield bonds, real estate, and commodities.

But why this spike?

There are many reasons, foremost of which are: rising deficits from tax cuts, the Fedselling off its stock of bonds, foreign central banks selling as well to prop up their currencies as the dollar rises, and late-stage inflation from so much stimulus and now temporarily higher growth.

Yet its’s been Italy that has seen the biggest spike lately, for different reasons.

I’ve been beating on the table for the past few years that it’s insane that Italy’s 10-year bonds yielded less than the U.S. when it has much higher public debt and the highest level of non-performing loans in Europe outside of Greece.

The country is technically and clearly bankrupt.

But yielded less they did because Mario Draghi of the ECB (European Central Bank) has been buying European sovereign bonds aggressively, while the U.S. stopped doing that after 2014, eventually becoming bond sellers. 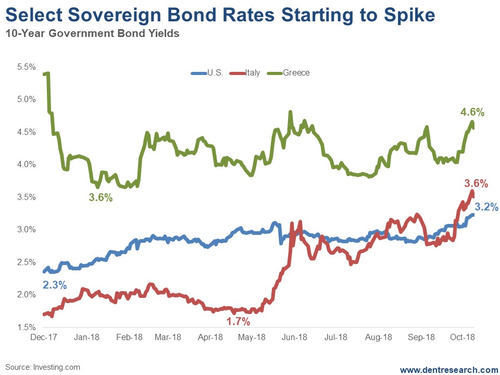 And unlike the U.S., it will NOT be the fixed income trade of the decade until yields go much higher and much longer. After all, they’re like the junk bonds of the sovereign sector.

In the last crisis, Greece was the basket case and its yields spiked up to 11.5% before the ECB bailouts and QE kicked the crisis-can down the road.

Well, now Greece AND Italy have caught up to that can again… with Portugal and Spain right behind… and Germany and France will be the ones to bear the brunt of bailing these countries out again.

This makes the bond markets nervous. They fear they won’t adhere to payments and/or austerity targets, and may well push to leave the euro at some point as the public sentiment continues to sour against the union (Italians always had the highest disapproval rating of the euro)…

So, don’t think this is the end of the bond spike for Italy or Greece or Portugal or Spain.

I expect Italy and Greece sovereign bonds to hit something like 15% rates in the next few years. Then they could be worth buying… maybe.

The good old U.S. Treasurys, like the dollar, will end up being the safe haven again when the shit hits the fan likely somewhere between late 2019 and 2022.

We’re monitoring this situation closely with an eye to recommending to our Boom & Bustsubscribers that they buy them and AAA corporates on this spike in the months ahead , and then the lesser quality sovereigns and corporate bonds at the worst when stocks will also likely be bottoming.

That’s a few years from now.