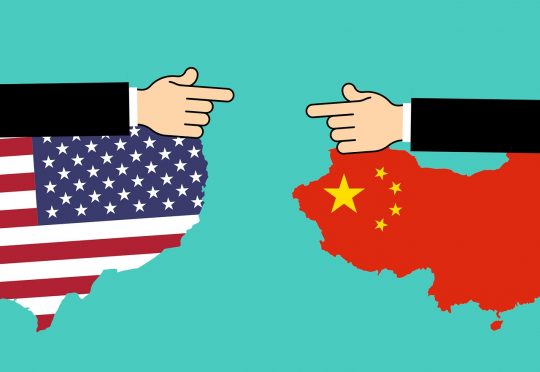 After what President Trump just did, the odds of the U.S. and China being able to reach a trade agreement this year officially just went from slim to none.  For China, there is no issue more sensitive than the status of Taiwan.  For the Chinese, it is unthinkable for anyone to even suggest that Taiwan is not a part of China, and the Chinese are prepared to defend their “one China” policy to the death if necessary.  On the other hand, most Americans are entirely clueless about Taiwan.  In fact, if you gave them a blank map of the world the vast majority of Americans wouldn’t even be able to find Taiwan thanks to our exceedingly poor system of public education.  So for most Americans, a news story about how President Trump plans to sell 2 billion dollars worth of arms to Taiwan is completely and utterly meaningless.  But for the Chinese, such news is a deep national insult…

The United States is pursuing the sale of more than $2 billion worth of tanks and weapons to Taiwan, four people familiar with the negotiations said, in a move likely to anger China as a trade war between the world’s two biggest economies escalates.

An informal notification of the proposed sale has been sent to the U.S. Congress, the four sources said on condition of anonymity because they were not authorized to speak about the possible deal.

This arms sale barely made a blip in the U.S. news cycle, but over in China they are officially freaking out about this.  According to one report, this deal would send “over 100 tanks and almost 2,000 missiles” to Taiwan…

The US, which is the main weapons dealer to Taiwan, would send over 100 tanks and almost 2,000 missiles to the island. There was outrage in China, who said they were seriously concerned after Taiwan’s defence ministry confirmed the sale. The move is believed to further heighten tensions between Beijing and Washington.

It comes days after Chinese defence minister Wei Fenghe said: “If anyone dares to split Taiwan from China, the Chinese military has no choice but to fight at all costs.”

Most Americans may not realize this, but the truth is that U.S.-China relations just took a really ominous turn for the worse.

And in addition to announcing this arms sale to Taiwan, President Trump also just threatened China with even more tariffs…

DONALD Trump threatened to hit China with tariffs on “at least” another $300bn worth of goods today – as a Beijing propaganda campaign painted the US as evil bullies.

Tensions between the world’s two largest economies have soared sharply since talks aimed at ending a festering trade war broke down in early May.

But trust me, the announcement of the arms sale to Taiwan was far, far more insulting to China than the tariff threat was.

On the Chinese side, they have decided to hit the U.S. right in the farm belt by “putting purchases of U.S. soybeans on hold”…

China is reportedly putting purchases of U.S. soybeans on hold amid the growing trade war with the U.S., according to a report from Bloomberg News. As the world’s largest soybean buyer, China’s move could ramp up the economic pressure on American farmers.

This has already been the worst year for U.S. farmers in decades, and this move by the Chinese is going to make things even worse.  For much more on this, please see an article that I posted earlier today entitled “U.S. Farms Are Facing Their Worst Crisis In A Generation – And Now Here Comes Another Monster Storm”.

Also, anti-American rhetoric in China has now reached a fever pitch.  According to CNN, the Chinese just issued an official alert warning Chinese travelers of “shooting, robbery and theft” in major U.S. cities…

On Tuesday, China’s Culture and Tourism Ministry warned its citizens of the risks of traveling to the US in an alert, citing frequent recent cases of “shooting, robbery and theft.”

On the same day, the country’s Foreign Ministry — along with China’s embassy and consulates in the US — issued a security alert for Chinese citizens, alleging “repeated harassment” of Chinese nationals in the US by local law enforcement officials.

Of course the Chinese are correct when they warn about the violence in our cities.  For example, more than 50 people were shot in the city of Chicago last weekend alone.

In addition to the travel warnings, Chinese state media is doing all that it can to put the U.S. in a bad light.  In fact, one major Chinese paper just called the United States the “enemy of the world”…

The new travel advice did not come in isolation.

China’s ruling Communist Party has launched a trade war propaganda campaign, with recent efforts — delivered via state media — focusing on US “trade bullying” and “hegemony.” In one noteworthy article, published Tuesday in party mouthpiece the People’s Daily, the US was labeled the “enemy of the world.”

Does it sound to you like the Chinese are ready to surrender and head back to the negotiating table?

No, the truth is that they are just getting angrier with every week that goes by.  Most Americans don’t even know that we fought against the Chinese during the latter stages of the Korean War, but right now over in China those old battles against “the evil American invaders” are being publicly celebrated…

President Xi Jinping’s state media has even begun to refer to a very bloody battle between America and Chinese forces during the Korean War.

The 1952 battle of Triangle Hill – or Shangganling in Chinese – has been glorified in China for decades as a turning point in the war.

School children are told how the sacrifice of Chinese soldiers eventually led to the “defeat of the evil American invaders”.

At this point, most Americans may be vaguely aware that some sort of a trade war is going on, but over in China they are taking this deadly seriously.  And without a doubt, the stage is being set for a full-fledged global showdown between the two superpowers.

This is not a game, and if things go badly we could potentially be facing apocalyptic consequences.

So hopefully Trump knows what he is doing, because right now things appear to be starting to spiral out of control very rapidly.