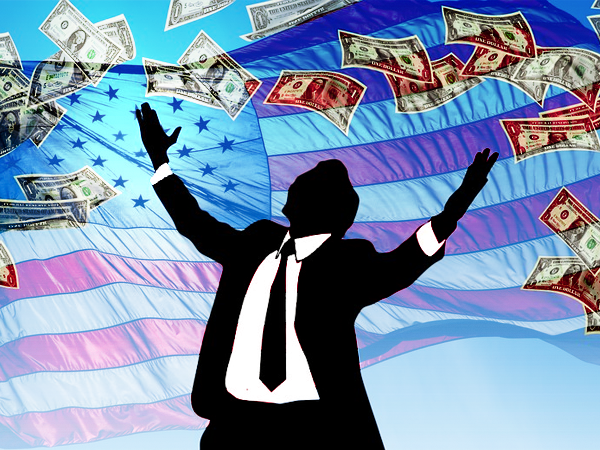 No surprise to anyone, the United States is in debt. Of the last 64 years, the U.S. has run a budget deficit for 62 of them.

According to Newsmax, it seems like 2018 will be a year of U.S. debt records:

So while money is certainly flowing, spending is exceeding revenue by almost 30%. That may be “business as usual”, but business as usual might get the U.S. into trouble.

What’s alarming is the record amount of interest that is being paid by the U.S. to service its debt. Of course the interest-payment problem isn’t new, but “business as usual” has reached critical mass.

Sovereign Man explains the dire U.S. debt-servicing situation leading up to 2018 (emphasis ours):

This is the rate of growth that’s probably most alarming – because the more quickly the government’s interest payments grow, the more money they have to borrow just to pay interest on the money they’ve already borrowed.

The Congressional Budget Office (CBO) issues reports that cover the U.S. budget, deficit, and various economic outlooks. These reports only factor in “business as usual,” like everything is peachy keen in U.S. Economy-land. They don’t factor in devastating debt-changers like recessions.

If the U.S. ever has to pour trillions into the economy for bailouts again, like it did in 2008, then the deficit and interest payments would increase exponentially.

Plus, if other expenses that require Federal dollars to repair it come up such as the bridge you drive across to get to work, then that would increase the U.S. deficit too.

Sum that all up, and increasing deficit, rising interest rates, plus insurmountable interest payments are all going to pose huge economic challenges in the near-term.

And the Fed may not be able to handle them.

U.S. Forming a “Borrowing Black Hole” It May Never Escape From

The deficit and rising rates are both growing so large it’s starting to form an interest payment “black hole.”

In fact, from looking at the three charts below, the outlook is pretty dire.

Spending doesn’t appear to be slowing down…

Rates have been on the rise since October 2015…

And interest payments are setting records, soaring to the highest levels they’ve ever been…

Put the record spending, rising rates, and astronomical interest payments together, and you have the recipe for economic doom in the U.S.

The interest payments alone require (and will continue to require) so much revenue to pay them, that the U.S. economy may never escape.

And according to Robert Wenzel, it’s a “catch a tiger by the tail” game that has no end.

In fact, a recent Bloomberg article highlighted the economic “black hole” the U.S. is forming.

The article indicates the U.S. budget deficit surpassing $1 trillion two years ahead of previous projections by the CBO (see chart below): 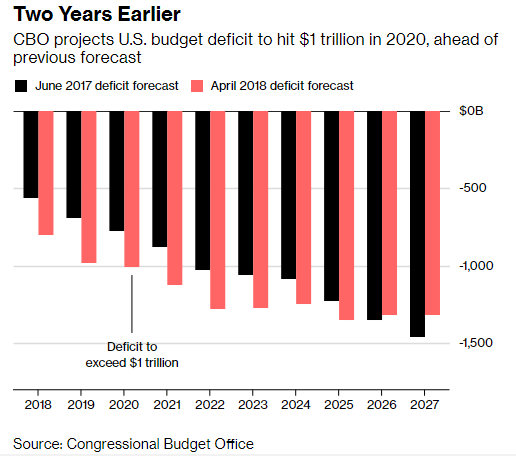 Coupled with its other problems, the U.S. Economy is pretty much walking on eggshells.

So if a major recession were to hit, the devastation could cause an impact that would be on a scale we’ve never seen in the U.S. And who knows what the Fed, Treasury, and Congress will be able to do about it.

So get yourself ready, because you’re on your own if the “Big One” hits.

Don’t Let Your Portfolio Get Sucked Into a “Black Hole”

The U.S. economy has become insolvent. It’s getting worse each year, and it may never recover from that. But your portfolio doesn’t have to follow suit.

Don’t let it get sucked into a recessionary “black hole.” Instead, consider adding some assets that can add stability(and profit potential) to your portfolio, in an unstable economy.