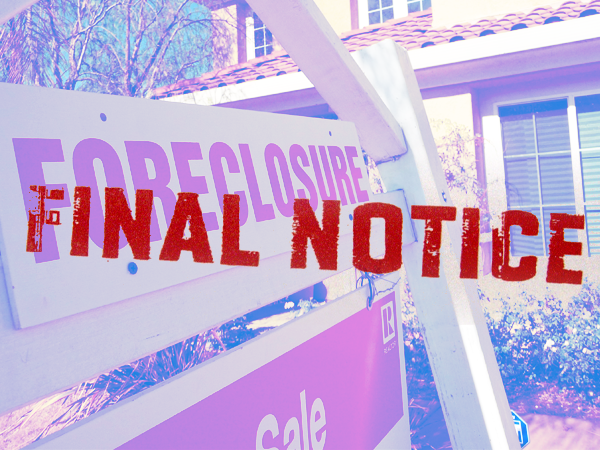 Photo by Wikimedia.org| CC BY | Photoshopped

One signal you don’t want to see in times of economic uncertainty is an increase in mortgage delinquencies.

If people aren’t paying the bill that puts a roof over their head, that doesn’t paint a pretty picture for the state of the U.S. economy.

Sadly, it looks like that picture could be taking shape right now. Wolf Richter recently highlighted the beginning of a potentially disastrous trend:

In April, the share of all mortgages that were past due, but less than 30 days, soared to 3.4% of all mortgages, the highest in the data going back to 1999. This was up from 0.7% in April last year. During the Housing Bust, this rate peaked in November 2008 at 2%.

The incredible jump in newly delinquent mortgages can be seen clearly in the chart below, by the owner of the famous Case Shiller Index, CoreLogic: 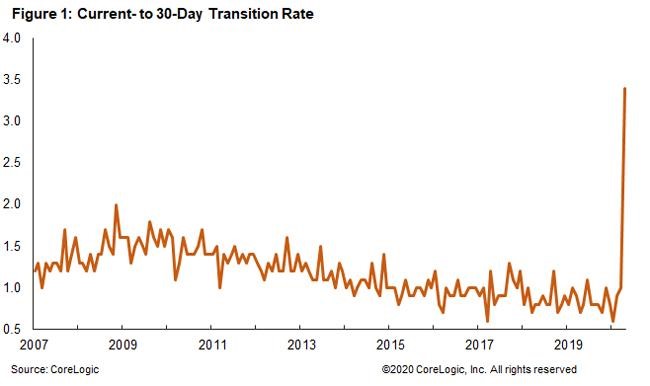 Even more startling is the fact that mortgages more than 30 days past due increased by a substantial amount for all ten of the largest metropolitan areas, with New York and Miami each logging more than a 10 percent increase: 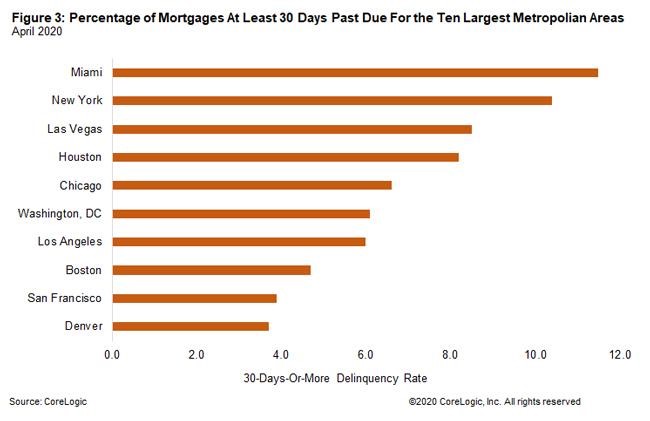 While the danger posed by the current mortgage delinquencies is fairly obvious, keep in mind the pandemic also spurred the passage of the CARES Act. Part of that legislation provides forbearance protections.

Writing for Yale’s School of Management, Vaasavi Unnava explained what this means:

Individuals with single-family mortgages may write to their mortgage servicer requesting forbearance for 180 days due to COVID-19-related difficulties. In such a case, no additional fees, penalties, or interest outside of normally scheduled terms may be levied on the borrower.

But eventually, even the protections offered under the CARES Act will end. And keep in mind this information is only reported through April.

When May, June, and July’s data is reported and the CARES Act is no longer helping, it will beg the question…

What Are Future Potential Ripple Effects for the Housing Market?

According to the Department of Labor, for the week ending July 11, total unemployment claims continuing to receive unemployment settled at 32 million. Once the CARES Act protections end, if those people are still unemployed or the situation gets worse, it would seem like delinquencies could rise even further.

Wolf Richter reported, “CoreLogic expects to see ‘a rise in delinquencies in the next 12-18 months – especially as forbearance periods under the CARES Act come to a close.’”

This could happen especially if the jobs some people left aren’t there once they can go back to work.

A rise in delinquencies has the potential to restart a crisis similar to 2008, but even if it doesn’t, the “confused” Fed’s recent troubles and other economic factors could combine for something much worse.

Let’s hope this bubbling cauldron of economic insanity doesn’t explode. But for now, it’s a good idea to prepare in case it does.

Make Sure Your Portfolio Has More “Order” and Less “Chaos”

With all of the chaos “swirling” around the economy at the moment, it can seem like things are out of control.

But you don’t have to lose control of your own savings. Examine the risk exposure, asset types, and performance of your retirement plan – while there is still time.