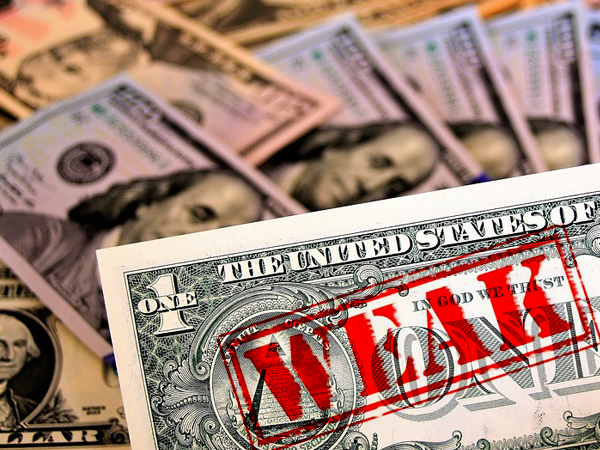 The value of the U.S. dollar is determined by a number of variables, both within our borders and outside of them.

For example, this year’s trade wars with China have resulted in a stronger dollar and a weakened yuan. China is a known currency manipulator, and there is not much the U.S. can do to control that.

However, there are a few internal mechanisms that can be used to raise or lower the value of the dollar. The primary mechanism is the Fed Funds Rate, which is controlled by the Federal Reserve.

In the current cycle, the Fed has been raising interest rates, which has strengthened the dollar. According to Jim Rickards:

The combination of rate hikes and QT [Quantitative Tightening] has caused a significant increase in U.S. interest rates in all maturities and, in turn, a stronger dollar as capital flows to the U.S. in search of higher yields. The result is a persistent strong dollar.

Since mid-April, the dollar’s value has been on the rise (see chart): 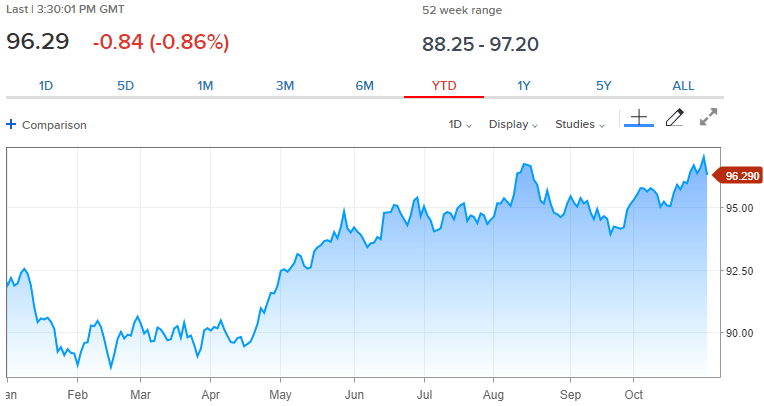 A stronger dollar typically makes imports less expensive, and can have a deflationary effect on the U.S. economy, among other impacts.

So this raises a question: If both internal and external factors are causing the dollar to become stronger, what could trigger a reversal and a rise in inflation?

First, it’s no secret that Secretary Mnuchin is actually in favor of a weaker dollar, not a stronger one. He said earlier this year on CNBC that a weaker dollar “would benefit the country”.

And believe it or not, the Fed and POTUS would both like to see inflationary effects.

See also  New York Times: "Inflation has the potential to drive welcome change for the planet"

To achieve this common goal, a possible alternative identified by Rickards is an uncommon U.S. Treasury intervention using their Exchange Stabilization Fund (ESF).

The Potential Impacts of an Uncommon Treasury Intervention

The U.S. Congress created the ESF in 1934 in response to British attempts to influence the exchange rate. Operations are controlled solely by the Secretary of the Treasury (aside from the President).

Outright currency intervention hasn’t been tried since the 1990’s, according to a report at MarketWatch. But according to Rickards, since the ESF operates outside of Congressional oversight, it can act like a “slush fund” that the Treasury could quickly use to intervene in the exchange markets.

POTUS and Mnuchin could hypothetically utilize an intervention like this in response to China’s successful devaluation of its currency by 10% over 6 months, a move that Rickards claims aided the recent U.S. stock market slide.

Or, the Fed may ultimately cooperate with the Treasury by delaying or reversing rate hikes. Either way, Rickards thinks a weaker dollar is on the horizon. Here’s why…

After a 3.25% growth per year trend was established in the U.S., he outlines the problem (emphasis ours):

The U.S. endured a long depression from 2007 until today with annual growth of about 2.3%. Europe and China got a boost, but the U.S. never pulled away from the pack.

Since then, it has been a matter of taking turns. The euro is allowed to depreciate to help growth and the banking system as the dollar gets stronger based on a slightly stronger U.S. economy. But no major economy has solved the problem of achieving self-sustaining trend growth.

The “Powers That Be” could start weakening the dollar again to stimulate the U.S. economy while price inflationkeeps rising. Food, energy, and other crucial commodities could get more expensive.

See also  El-Erian: Fed has learned nothing about their inflation mistakes

This may be good for bankers and politicians, but it could have many unintended negative consequences for Americans.

How to Hedge Against the Impact

If the dollar weakens, precious metal prices, such as silver, could be positioned to “break out.” Then there’s gold, which could do well as a hedge against a dollar in crisis.

No one knows what the Treasury will do. But in the case we see much higher rates of inflation, shouldn’t you be prepared?