Since World War II, not many countries have dared to challenge the United States’ military dominance in the world. The US has a far greater military reach than all its closest competitors. In recent years however, other powerful nations have begun to challenge US Supremacy by flexing their military muscle away from home.
China has recently shown a strong intention to expand their influence around the world by opening their first overseas military base. The new base is in Djibouti, a very important strategic position on the world stage.

This move puts China in the middle of a region that the US – Saudi regime is currently trying to dominate. The US has troops all over the Middle-East, including Somalia, South Sudan and Yemen. With massive support from the Saudi Kingdom, the US has conquered land in the Middle-East over the last two-plus decades that is rich in resources and trade routes.
The nation that controls the trade of valuable resources essentially controls the world. China has shown disregard for US interests by pursuing a plan to establish its own massive trade routes. By moving its military into Djibouti, China now has more control over the route through the Middle-East, East Africa and up to Europe.
China’s ultimate goal is to establish the world’s largest trade route called the “One Belt, One Road” initiative. You can see from the map below that establishing a presence in Djibouti goes a long way in achieving their trade route goals. 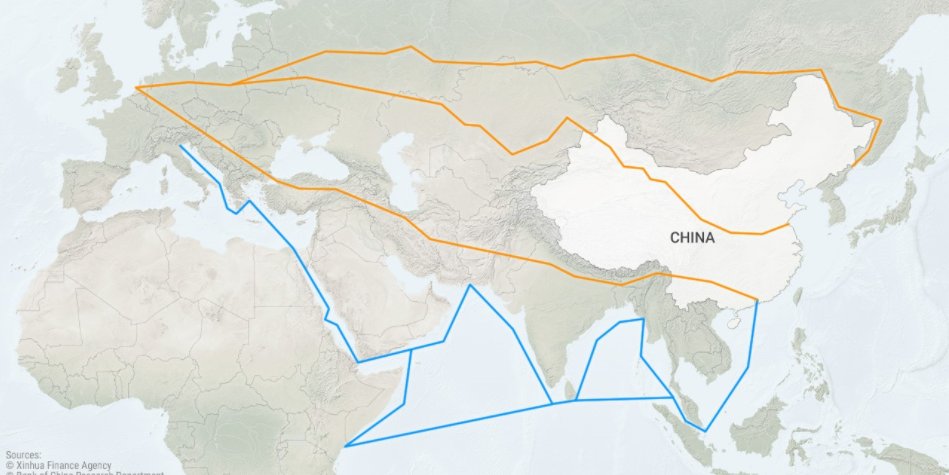 It will be interesting to see how China and the US settle any disputes that may arise from conflicting interests in the region. The US has been using military force to get what it wants for many decades. Now that they are being challenged by immensely powerful nations, will they turn to a more diplomatic approach?
The US – Russia relationship in Syria may be foreshadowing in how the US decides to deal with China. If the US decides to continue its hostility towards Syria and the nuclear superpower Russia, we should expect that they will have no problem acting aggressively towards China. On the other hand, if the US honors its ceasefire with Russia, we can hopefully expect more diplomatic and peaceful resolutions.
The US is in the driver’s seat when it comes to the decision between peace and war. They are still the most powerful nation on earth, and they have the power to escalate and deescalate military tensions. The United States can accept the reality of dwindling control over the world and use diplomacy, or they can use military force to cling to their power for a little longer. For the sake of peace and stability in the world, I hope they choose the latter.

See also  As the first outlet in Europe, Nya Dagbladet can publish what appears to be classified US plans to crush the European economy by means of a war in Ukraine and an induced energy crisis.
See also  ‘We Will Not Back Down’: Major CEO Claims ‘Anti-Woke Backlash’ Is ‘Incredibly Dangerous For The World’
Trending: Views: 22