The debt accumulated under Donald Trump would be enough to cover the inflation-adjusted cost of U.S. involvement in the Second World War

This week, the United States national debt ticked above US$22 trillion for the first time, an amount equivalent to $67,000 per U.S. citizen.

The U.S. federal government owes more money than any other institution in the history of human civilization. And it’s just getting worse. According to the Congressional Budget Office, in only 10 years the U.S. debt-to-GDP ratio will be higher than any point since the Second World War.

Below, a few factoids about just how eye-wateringly, bone-chillingly large the U.S. debt has become.

U.S. debt is now higher than the combined market value of the Fortune 500

The Fortune 500 list includes all the recognizable titans of American business from Apple to Amazon to Exxon-Mobil to the list’s ranking 500th spot, the uniform and laundry company Cintas. Taken together, they basically constitute every major consumer, media, industrial and entertainment product in the United States. If you are the average westerner, the Fortune 500 is responsible for most of your wardrobe, your diet, your home and your leisure pursuits. The sheer size of Amazon alone is difficult to picture: Millions of products, thousands of employees, hundreds of buildings. And yet, add up the market values of all 500 companies and it’s equivalent to just $21.7 trillion. Thus, even if the United States nationalized the most profitable segment of its private sector and immediately auctioned them off for cash, it would still have $300 billion owing on its debt. (This would also destroy the world economy. Don’t nationalize things to pay off debts, everybody).

Worrying About Deficits Falls Out of Style…

READ  Bulls cannot be happy about this...

The widening federal budget deficit has yet to result in economic calamity, but as more money goes to interest payments on debt, less is available for things like infrastructure, schools and social benefits

WASHINGTON, D.C. — Thirty-five percent of Americans name the government, poor leadership or politicians as the greatest problem facing the U.S. This is the highest percentage Gallup has recorded for this concern, edging out the previous high of 33% during the 2013 federal government shutdown. 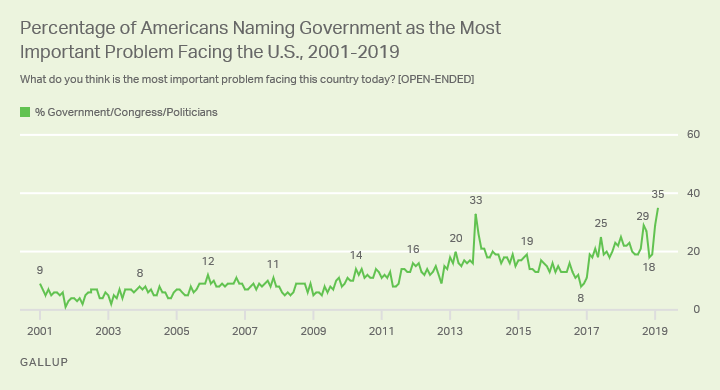 The latest update is from a Feb. 1-10 Gallup Poll. Full results from this month can be found at the end of the article.

Gallup has asked Americans what they felt was the most important problem facing the country since 1939 and has regularly compiled mentions of the government since 1964. Prior to 2001, the highest percentage mentioning government was 26% during the Watergate scandal. Thus, the current measure is the highest in at least 55 years.

The current percentage of Americans naming government as the most important problem is nearly twice as high as the 18% recorded in November. That increase likely reflects public frustration with the government shutdown that occurred from late December through most of January. Gallup observed a similar double-digit spike spanning the 2013 government shutdown, from 16% in September 2013 to 33% in October 2013.