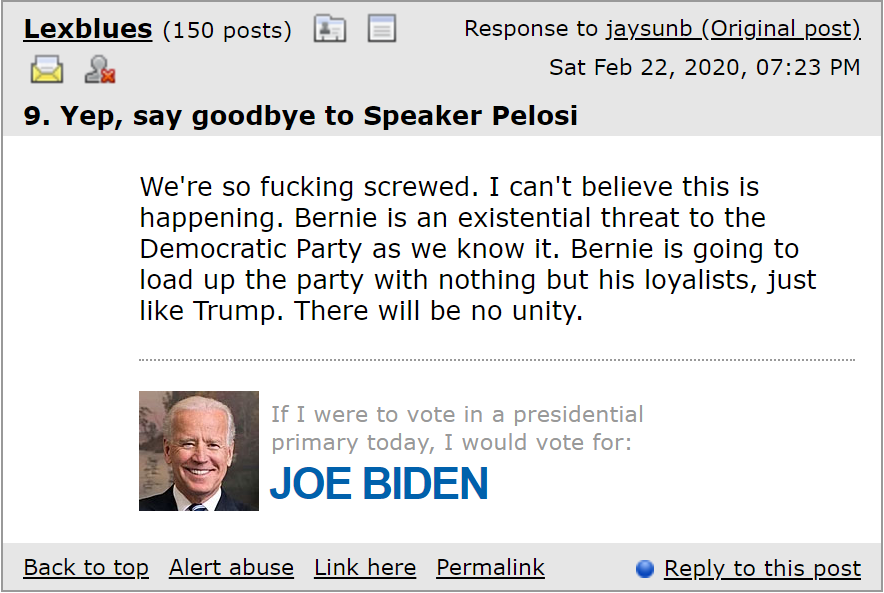 A lot of this happening on one of the main Democrat forums.

Just a small sample of what’s going on over there.

Many proclaiming it is the end of the Democrat party, etc.

VIDEO: “The Media Freaks Out When They Realize Bernie Is Winning” (Compilation)

He virtually said it on live television. To be blunt, Matthews said that the Democratic Party establishment would be better off with four more years of Trump than a Sanders administration and the revolutionary baggage that comes with it.

THE CANDIDATES COMPARED: Bernie Sanders may be a disaster for the Democratic Party.  But it isn’t clear that the other candidates are preferable on the crucial issues.  For example, Sander proposes to cut the number of people incarcerated at both the federal and state level by a whopping 50%.  Alas, that’s absurdly unrealistic.  But Pete Buttigieg has made the same proposal.

Since some people have the idea that Buttigieg is a moderate, my friend Barry Latzer’s discussion of the candidate’s criminal justice proposals may be worth a look.

(My own thoughts on crime—and in particular the racial aspect of it—are here.)