President Trump constantly warns about China as a threat to the world. China takes American jobs, adds to the national trade deficit and steals intellectual property. But how should we understand the rapid rise of China on the global economic stage? Our visualization puts things in perspective. 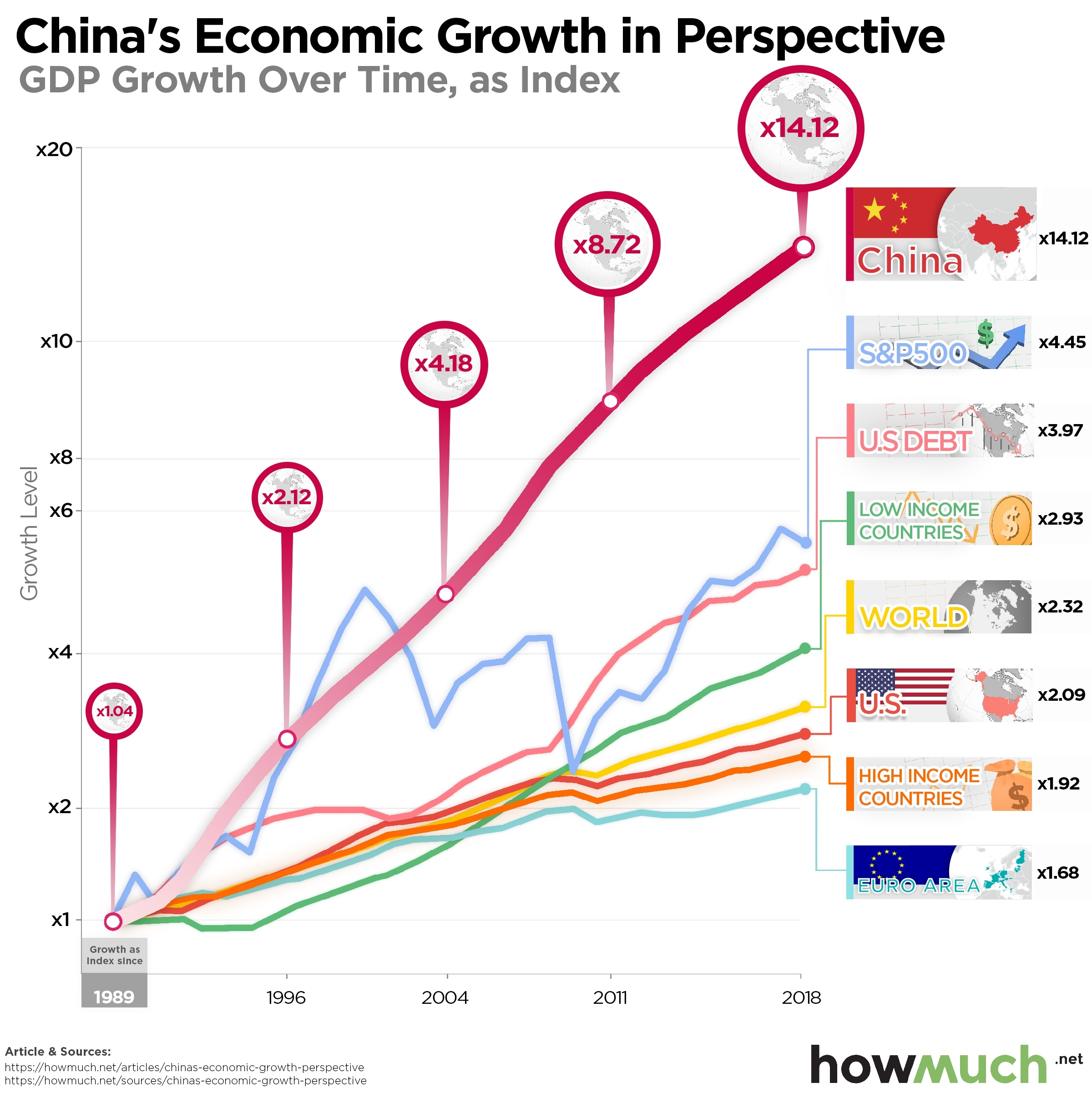 We arrived at the numbers behind our visual by pulling from a few different sources. First, we grabbed GDP growth figures from the World Bank and returns from the Dow Jones Industrial Average from macrotrends. We also used the World Bank to determine high and low income countries. We found U.S. debt numbers from The Balance. We adjusted all of these figures to reflect 2019 dollars, allowing us to create a true apples-to-apples comparison across time. This lets us measure growth rates in real terms over the last 30 years.

China’s economy started to grow in 1989 and hasn’t let up, double in size roughly every 8 to 10 years. China’s growth rate surpassed every other measure we found, from the Dow Jones Industrial Average, to rich and poor countries, and even U.S. debt. It’s more than 14 times as big as it was in 1989.

Past performance is no guarantee of future results, as everyone knows. President Trump is famous for his trade war, even if a deal seems like it could happen anytime now. Even if nothing happens and tariffs continue to escalate, multinational companies are still dropping buckets of money to invest in China. It’s an open question how long it will take China to double yet again given these challenges, especially given the recent headlines about slowing down.

Another interesting storyline in our visual is how China’s rise has been steady and one-directional, but the Dow Jones Industrial Average and American debt levels have ebbed and flowed over the decades. The stock market obviously contracts during recessions before recovering, but it’s only 4.45 times as big as it was 30 years ago. U.S. national debt, on the other hand, tends to grow no matter what the economy is doing. In fact, there’s been a U.S. national debt boom over the last few years even with a strong economy.

It’s important to keep in mind how these figures are all relative, and there are lots of other ways to measure and compare wealth between countries. For example, the debt-to-GDP ratio shows how large debt levels aren’t necessarily a bad thing if a country’s economy is likewise enormous. It’s also critical to understand how the U.S. is still the biggest economy, by a lot. China is able to post such impressive growth numbers because it started as an agrarian economy in 1989, and then transformed into a manufacturing powerhouse.

Do you think China’s economic growth has been a positive thing for the world? Share this article on Twitter and let your friends know.