We all know it costs money to make money, but is there a direct correlation between income and overall personal wealth? If there is, we would expect to see the relationship in our new visualization comparing accumulated wealth and disposable income at the household level across the OECD. 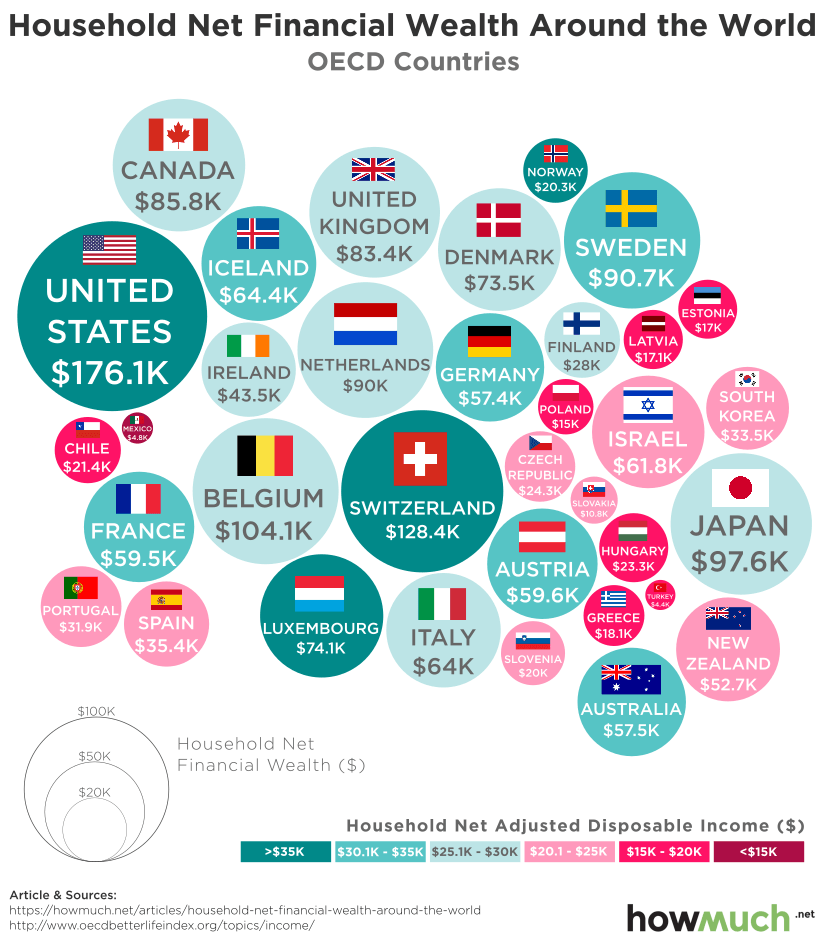 We got our numbers directly from the OECD. Our visualization roughly corresponds to the geographic location of each country on the map—the U.S. is furthest “west” and Japan is further “east.” The size of each bubble represents average household wealth for each country, or assets minus liabilities. This takes into account things like savings, securities, stocks and loans (but not real estate). We then color-coded each bubble based on the average disposable income for each household, which equates to the amount of income left over after taxes and transfers have been taken out. Basically, it’s how much you can spend on living expenses and other discretionary purchases.

These are the top ten countries among the OECD with the highest household wealth, together with the average disposable income.

READ  Robert Kiyosaki: You need an escape plan with untraceable wealth … Ronni Stoeferle: Why $5,000 gold is in the cards …

Our visualization reveals several key insights about personal wealth accumulation across the OECD. First off, the U.S. clearly dominates the rankings with over $170k on average per household. The other standout on our list, Switzerland, is far behind the U.S. with $128k of accumulated household wealth on average. The rankings then become much tighter further down the list with countries grouped together in the $70-90k range. There are also a few countries in the OECD for obvious political reasons. It is hard to see why Russia should be counted with only $16,657 in disposable income and $2,260 in net financial wealth.

One obvious assumption behind our numbers is the longstanding decline of defined benefit pension systems in the U.S. Whereas European countries maintain social programs that provide for a secure retirement, many workers are largely left alone in the U.S. to save for their golden years. Another factor is wealth inequality. Since we are only looking at average figures, a small number of millionaires and billionaires in the U.S. inflate average wealth figures, when in reality most people are barely getting by.

All these caveats aside, clearly the U.S. enjoys a leg up in wealth accumulation within the OECD. Also keep in mind that owning your own home is closely associated with building personal wealth, but the OECD excluded the value of land and dwellings from its analysis. This means that in all likelihood, our visualization actually understates the real value of American accumulated wealth.