by Daniel Carter
On the surface, the conflict between the US and North Korea looks simply like the world’s superpower trying to quell the dangerous power of a dictatorial madman. However, after examining the details of this conflict more closely, a much more complex and dangerous situation is revealed.
The origins of this conflict began during the time of World War II. Up until the end of the great war, Korea was ruled by Imperial Japan. After the US and Soviet Union defeated Japan, they came to an agreement to where they would both share the land for military purposes. The Soviet and Chinese-backed Korea was in the north, and the US-backed Korea was in the South.
Not long after the second world war, tensions began to rise between the communist countries (USSR and China) and the US.  In 1950, the communist troops from the north invaded the US-backed southern territory, and the Korean War officially began. The result of this war was a division of the two territories into North Korea and South Korea.
China and Russia have enjoyed using North Korea as a barrier against the US empire. They have never made a serious attempt to stop the North Korean regime because they don’t want the US to expand its military presence into North Korea. It is my inference that they let North Korea develop the 4th largest standing army in the world primarily for this reason. Relations between the two eastern countries and the US have consistently soured over the last several years.  Both countries are beginning to challenge the US’s economic power, and the US seems willing to challenge them back. Both are putting pressure on the US’s petrodollar system. Russia is also defending its Syrian ally against US invasion at the moment.
It is highly likely that China and Russia view the US’s aggression toward North Korea as a threat toward themselves. Both countries have moved troops to their North Korean borders in anticipation of a US invasion. 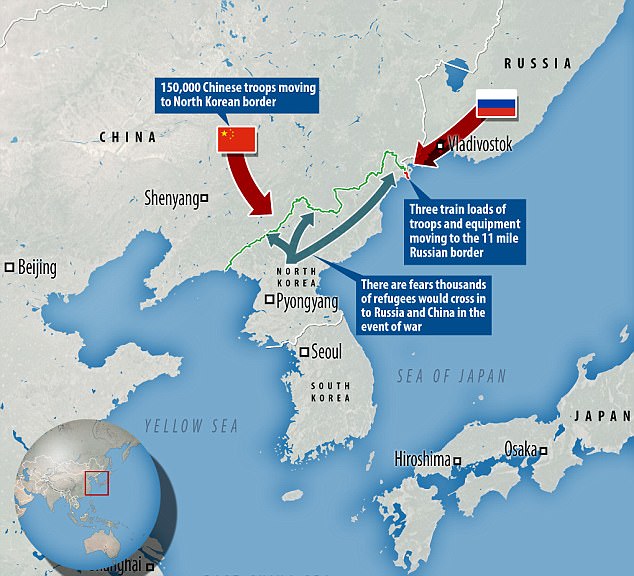 A war between the US and North Korea could be a much more serious situation than many realize. Conquering the 4th largest standing army won’t be easy even with the US’s far superior technology. Also, the US must deal with the potential of China and Russia funding or directly fighting for the opposition. Their military strength would negate a lot of the shortcomings of North Korea’s technology. China and Russia also have huge armies to put into the conflict.
I fear that the US government is willing to accept the risks. A Fox News Poll shows that the government already has public support, with 53% of the public favoring military action against North Korea. Most people are not aware of the extreme risks, however. It would be ideal for all sides to solve the conflict diplomatically.