Chuck Todd: You should be a witness. They may want to call you.

“Well, look. If the Senate wants to call me as a witness, then they pretty much made the decision not to take this process seriously. I’m not a fact witness. I was the chairman of one of the committees doing the investigation. I’m not in the shoes of a special counsel. I don’t work for the Justice Department. All I can relate is what the witnesses said in the deposition and in the open hearings. And that’s no reason to call me as a witness.”

Ummmmm……………Due to his coordination and contact with whistleleaker Eric Ciaramella, Adam Schiff is a fact witness.

Senators Grassley and RonJohnson seek “suspicious activity reports,” documents that financial institutions file with the Treasury’s Financial Crimes Enforcement Network when a case of moneylaundering or fraud is suspected 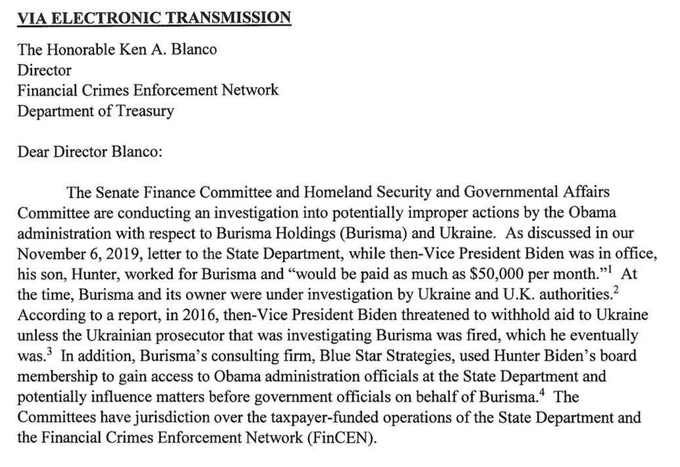 Cant wait for the Senate hearings.

It just gets worse and worse for the International Democratic Political Party Organized Crime Network in the US, their US Propaganda Network Accomplices and their Corporate Donors…

Quote:A liberal watchdog group’s attempt to nail Rudy Giuliani has backfired in spectacular fashion after their FOIA request resulted in the US State Department releasing detailed accusations of corruption against the Bidens – based on interviews with former Ukrainian officials who were in charge of the investigations.