Headline in Bloomberg the other day:

“Millennials Are Facing $1 Trillion in Debt.”

A trillion always sounds like a lot. It is a lot. But while the absolute number is large, that is not the issue.

The issue is what makes up this millennial debt. It’s mostly student loans, and a staggeringly high amount of these loans are in delinquency.

And this is at the top of an economic expansion!

On a societal level, imagine what happens if the economy takes a wrong turn and these student loans—which are already 10% delinquent—go to 40% delinquent?

Not to get all “Book of Revelation” on you, but debt has historically led to war and inflation and autocracy.

Once you know that, you develop a healthy respect for debt and the destruction it can cause.

Wall Street folks often view debt as a numerical abstraction. Like, if the default rate rises to 6%, then high-yield spreads over Treasuries will go from 300 to 700 over.

That’s the kind of gearhead stuff most analysts talk about.

I recognize the investment opportunities, but I’m also conscious of the impact on human beings when people apply too much leverage.

If you are in debt, in most cases it’s your fault.

But in the case of millennials, they made decisions to take out student loans when they were too young to make these decisions.

Someone in the Bursar’s Office stuck a form in front of them and said “sign here.” And without a second thought, these 18-year-olds signed their future right down the drain. 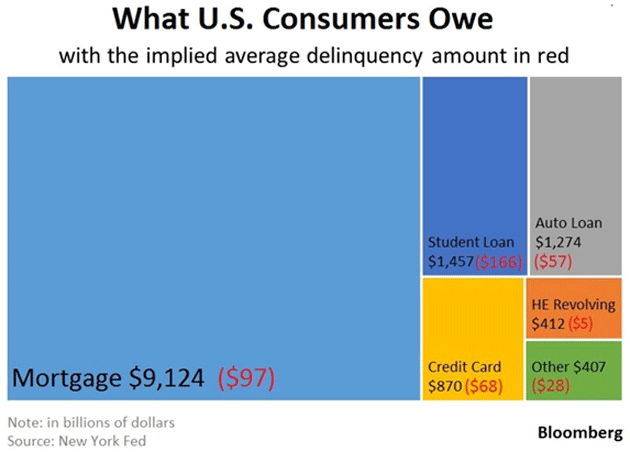 So when millennials say that it isn’t their fault and the debt should be forgiven, they’re half right.

They’re guilty of having a high agreeableness score and shocking levels of innumeracy. Even so, they’re not deadbeats any more than any other generation are deadbeats.

And they’re not any more prone to extravagance.

Nobody does this deliberately.

If I were to take out six figures in student debt, I would build a spreadsheet to figure out how long it would take me to pay it back. 99.9% of these people do not do this.

Are they wrong? Or do we just need to lower expectations?

This talk about forgiving student-loan debt is dumb. Because remember, you have to respect the rights and property of the lender.

If I were running this hamburger stand, I would work to compel student lenders to enforce the same credit standards that banks do when they issue mortgages.

Naturally, that would result in fewer people going to college—or, at least, to expensive colleges. And that is okay!

It would force colleges and universities to think a little harder on the sprawling bureaucracies they’ve built for themselves, along with the 5-star accommodations.

The University of Michigan famously employs 93 full-time diversity staff, the top 26 of which make six figures.

Yes, college could be cheaper.

I have been focusing on debt from a micro perspective.

My colleague John Mauldin talks a lot about debt from a macro perspective.

The national debt is huge and growing and is a problem. Unless we take corrective action, we will also be in checkmate.

Having said that, there may not be tangible economic effects for a while. Deficits do matter, but with a very long lag.

If a household goes into debt, the effects are immediate.

Even if a recession doesn’t happen, the absolute best-case scenario is that people limp along with crushing debt service, crowding out consumption and investment.

This is a personal mission of mine. I talk to people and I hear stories about how debt constrains behavior. It sucks up all the free cash flow.

I bet if people had an extra $1,000 a month in free cash flow, they’d at least find something fun to do with it.

I paid off what was left of my debt two months ago. Tomorrow is the first of the month—no mortgage payment! Sublime.

I hope one day everyone gets to experience the same feeling of liberation.