What killed the middle class? The answer may well echo an Agatha Christie mystery: rather than there being one guilty party, it may be that each of the suspects participated in the demise of the middle class.

If you doubt the middle class has expired, please consider the evidence:

Wealth concentration returning to ‘levels last seen during the Roaring Twenties,’ according to new research

People tend to self-report viewing themselves as middle class, but by the standards of previous eras, they lack the basics of middle class prosperity. I laid out 12 core characteristics of classic middle class security in What Does It Take To Be Middle Class? (December 5, 2013).

By these standards, perhaps one-third of American households have the same security and assets as previous generations who identified themselves as middle class: Honey, I Shrunk the Middle Class: Perhaps 1/3 of Households Qualify (December 28, 2015).

See also  OUR POLITICAL CLASS IS LOOKING TO CHINA AS A MODEL: Hong Kong protester convicted in 1st trial under Chinese security law.

The ten primary drivers of the erosion of the middle class are:

1. The shifting of pension and healthcare costs and risks from the state and employers to employees. (see chart below)

2. The decline of safe, secure high-yielding investments as central banks have driven savers into risky, crash-prone assets such as stocks and junk bonds.

3. The decline of scarcity value in college diplomas that were once the ticket to middle class security. How Many Slots Are Open in the Upper Middle Class? Not As Many As You Might Think (March 30, 2015).

4. The inexorable rise in big-ticket costs: higher education, healthcare and housing. Even as wages stagnate, these costs continue rising, claiming an ever-larger share of household incomes, leaving less to save/invest.

5. The transition from a stable economy with predictable returns to a financialized boom-and-bust economy that wipes out middle class wealth in the inevitable busts but does not rebuild it in the booms.

See also  Michael Pento: The Fed Is Murdering The Markets And The Middle Class

6. The regulatory and administrative barriers to self-employment, forcing most of the workforce into wage-slavery and/or dependence on the state. Endangered Species: The Self-Employed Middle Class (May 2015).

7. The rising exposure of the U.S. workforce to highly educated, lower-cost competing workforces in a globalized economy.

8. The decline of labor’s share of the U.S. economy: the slice of the pie distributed to earned income is declining.

9. The share of the earned-income slice going to the top 5% is rising.

10. The wealth of the middle class is tied up in the family home, a non-income producing asset prone to the wild swings of housing bubbles and busts. Stagnation Nation: Middle Class Wealth Is Locked Up in Housing and Retirement Funds (October 25, 2017). 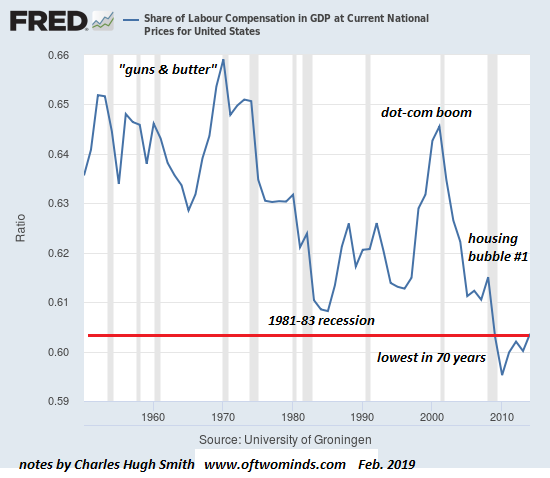 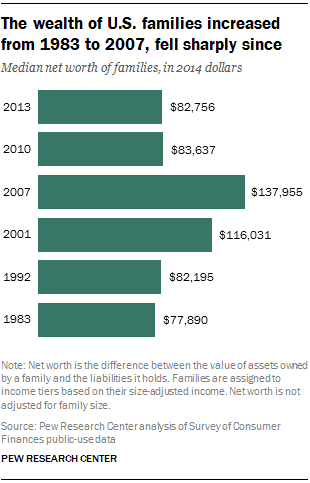 That’s a lot of knives plunged into the middle class. Rounding up the usual suspects won’t restore a vibrant middle class; that will require a systemic transformation of the U.S. economy and society from the ground up.