Nobody dares discuss it openly for fear of triggering a panic, but there aren’t enough lifeboats for everyone.

There’s no shortage of explanations on the whys and wherefores of the US stock market’s recent swoon / swan-dive / plummet. Here’s a few of the many credible explanations:

— the economy has reached peak earnings so there’s no fundamentals-driven upside left;

— US markets are catching up to the rest of the world’s market slump;

— the US market is overvalued by just about any measure;

— uncertainty about the mid-term election;

— corporations had to limit their stock buy-backs in the pre-earnings season blackout;

— smart money has been selling all year, and this finally overwhelmed dumb moneybuying the dips;

— market punters peering into the future saw higher rates, and decided to dump stocks now rather than later;

— the market is discounting the coming recession;

Whew. Got all that? 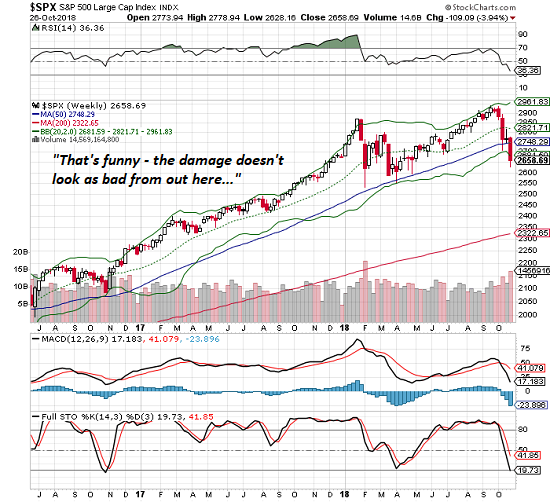 My explanation is much more simple: the status quo is fragile, and everyone’s grip on the crumbling cliff-edge of “prosperity” is precarious–and we all sense it. The security we all took for granted is turning to sand as the system breaks down. Job security–you’re joking, right? Pension security–you take us for chumps? Sure, your bank account is guaranteed by the FDIC, but nobody’s guaranteeing your income, your purchasing power or the security of your grasp on the good life.

Everyone knows the markets are as precarious as the rest of the status quo, and the rational response is to limit exposure to risk by selling at the first signs that the herd is nervous.

Switching metaphors, we all know the global economy scraped alongside an iceberg in 2008, and those who look beneath the reassuring rah-rah know that the hull of the global economy was sliced open just like the Titanic’s. Central banks have created the illusion that the damage was limited by printing money and using the freshly created currency to buy bonds and stocks to prop up the markets.

But even the passengers who accept the authorities’ reassurances sense something is wrong with the ship. The bow is slowly sinking, the engines are straining to power the pumps, the First Class passengers are either already in lifeboats or huddling nervously by the davits, and the ship’s officers are openly wielding pistols to control panic.

Nobody dares discuss it openly for fear of triggering a panic, but there aren’t enough lifeboats for everyone. A great many passengers are going to find themselves in the icy waters when the great global economic ship finally founders, and humanity’s finely tuned instinct is alerting us to the restless nervousness of the herd.

This particular near-stampede may well be calmed down, and naysayers punished by a monumental rip-your-face-off rally to new highs, just to settle any doubts that the great ship isn’t sinking. Rather, the party on the first class deck is just getting started, and a few bottles of champagne might make it down to the 2nd class deck or even to a lucky few in steerage.

But despite all the reassurances and rallies, we all sense the fragility and precariousness. No wonder the first hint of trouble triggers a stampede.