I have come to realize that the markets are potentially on a collision course for disaster. The collision course is being brought about by strong fiscal stimulus in the late stage of the business cycle, when conventional economic wisdom mandates that it should be heading the other direction to create fiscal drag. The U.S. economy is beyond full employment. The labor market is beginning to reach capacity constraints in a number of areas, which is resulting in a pickup in wage pressures. At this stage of the business cycle monetary and fiscal policy would normally be utilized to cool off the economy, but with the huge fiscal stimulus coming online, the Federal Open Market Committee (FOMC) will feel obliged to play the role of creating economic headwinds.

During the financial crisis and the Great Recession, the FOMC played the opposite role. As budget sequestration took effect and the size of the deficit shrank between 2010 and 2016, the Fed was left as the only source of stimulus for the economy. The fiscal headwinds of the economy made it necessary for the Fed to maintain a very low interest rate policy through the use of quantitative easing to help the economy expand and offset fiscal headwinds.

Now, as newly installed Fed Chairman Jerome Powell has testified, the headwinds of fiscal policy are gone and have turned into tailwinds. We are seeing some market estimates for economic growth upgraded to 3.5 percent. That might be a challenge for the first quarter but it is certainly not impossible this year. To have 3.5 percent growth at this phase of the expansion—when we are essentially running out of labor and other factors of production are being stretched—makes it extremely hard not to see how inflation and wage pressures will pass through to the real economy. As I have been saying for a while, the Federal Reserve (Fed) will raise rates four times this year, and probably four times next year. Currently the overnight rate is between 1.5–1.75 percent. Thus a year from now it will be 2.5–2.75 percent, and a year later it will be between 3.25–3.5 percent. When the overnight rate gets to 3 percent, the amount of free cash flow in corporate America will be reduced to a level which is consistent with what we have seen in prior recessions.

See also  HYPERINFLATION is the Goal To Usher in a New Monetary System. What Will It Look Like?

There should be some offset to this cash flow squeeze from the reduction in the corporate tax rate, but what are corporations going to do with the money? Since return on equity (ROE) has been declining for the last 10 years, corporations will try to increase ROE with stock buybacks. Some corporations will increase dividend payouts. Others will make strategic acquisitions. Corporate America will not be sitting on the cash.

This is the collision course. The collision will take place when the effects of fiscal stimulus begin to wear off and monetary policy keeps getting more and more restrictive.

We will enter the next recession with the highest debt load on record for corporate balance sheets. In the last recession, consumption by households collapsed because their balance sheets were overburdened by debt, and it was the household sector that led us into the recession. This time around, the household sector is in good shape. The next recession is going to emanate from the corporate sector. There is likely to be a sharp decline in employment and a sharp decline in profitability, followed by widening credit spreads as the market discounts the expectation of higher corporate defaults.

U.S. Nonfinancial Corporate Liabilities in $ bn and as % of GDP 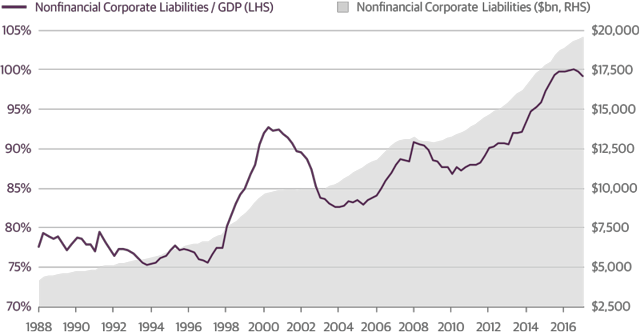 See also  HYPERINFLATION is the Goal To Usher in a New Monetary System. What Will It Look Like?

I remember being asked in 2008, at the height of the crisis, what would happen next. I explained that the deficit would explode, and the world would wake up and realize that a 5 percent personal savings rate would not be enough to fund the U.S. fiscal deficit. I startled my interviewer when I said that the Fed would ultimately be forced to buy debt directly onto its balance sheet. Many thought I was crazy to even suggest the idea that the Fed would use its balance sheet to support the market. How the world has changed!

The coming downturn could lead to a replay of what happened in 2008. The only difference will be that the reaction function of the Fed will be quicker. New York Fed President William Dudley said recently that quantitative easing (QE) is still a tool in the Fed’s toolbox, but it is a tool of last resort. Yes, but it is a tool that will ultimately be pulled out of the toolbox a lot faster the next time it is needed. If my scenario is correct, we are going to end up back in QE. Ultimately, QE will push down real rates of interest. Real rates of interest will once again become negative as the Fed will likely be willing to tolerate higher rates of inflation. This will set up the market for the beginning of the Great Bear Market in Bonds. It will become clear at that point that policymakers will have no choice but to accept higher levels of inflation rather than face a severe economic downturn that cannot be financed through U.S. savings.

This scenario is likely to play out slowly over the next several years, but do not be lulled to sleep. Fixed-income returns are going to become more benchmark-like for a while. As credit spreads are already low, virtually all the return will come from coupon clipping and the way a portfolio is positioned on the yield curve. Take this opportunity to trade up in quality and to shorten duration. When the next economic downturn comes, investors maintaining or adding to credit risk now will wonder why they didn’t see the obvious. Most things become clear with hindsight.

LITTLE POTENTIAL FOR CORPORATE SPREADS TO TIGHTEN FROM HERE 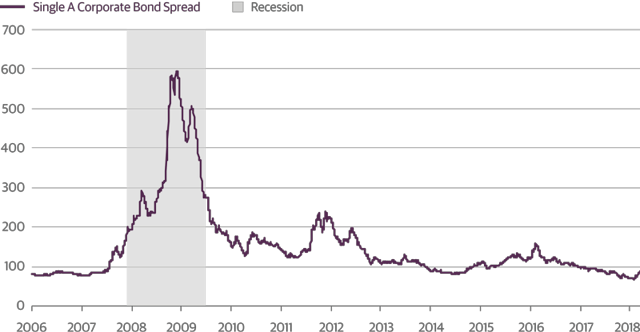