by Ruby Henley
President Donald Trump pardoned Joe Arpaio on Friday, despite the cries from the Left.  He knew it was the right thing to do, and as President of the United States he had that power.  Arizona Sheriff Joe Arpaio is one of the good guys, but he was convicted of criminal contempt related to his tough tactics of going after undocumented immigrants.  Of course, Arpaio was a vocal proponent of President Trump’s candidacy, as Trump ran on the same  aggressive stance on border security and deportations.  America has been invaded by illegal immigrants, and the majority of them are young men.  Many of these young men were militant and came into this Country to do harm, and they have.
However, President Trump is making it a priority to protect the borders of the United States.  He has to fight each day of his Presidency to fulfill his campaign promises to the American people.  He started his Presidency with a White House staff of Presidential appointees, who have been deleted by the Left one by one.  He trusted as he took the Presidency that he would be granted the same rights as President Obama had been granted, but sadly this has not been the case.

Obama pardoned many during his Presidency, and his pardons were respected by the American people, although we watched as he pardoned terrorists and criminals threatening this Country.  His record does not look so good as we look back now. 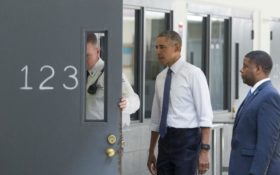 Former President Barack Obama used his executive power liberally, issuing more clemency to convicted criminals during his two-terms than his past six predecessors combined.  In total, Obama ordered the release of 1,927 prisoners before leaving office in January.  Critics said this final betrayal against law and order could unleash a crime wave in American streets.

To be quite honest with you, as I read over some of his pardons, I agree with them.  He pardoned many, who were in prison for drug violations.  I am still on the fence on this issue.  I do believe there are many souls filling our prisons, who should be released.  That is all I will say, as it is my own personal opinion.
However when it comes to terrorists and those, who have threatened the safety of the American people, I have no mercy.  There is a vast difference between drug addiction and terrorism.
So what exactly is Obama’s record on Presidential pardons?

www.aim.org/aim-column/obama-prepares-pardons-for-terrorists/
In another strange twist to this ongoing story of how Obama and Holder are perverting the legal system in order to benefit crooks and criminals, it has been disclosed that charges against Elizabeth Ann Duke, a fugitive from justice considered “armed and dangerous” by the FBI, have been dismissed. Duke is yet another associate of Bill Ayers, notorious for her involvement with the May 19th Communist Organization and charged in the bombing of the U.S. Capitol, among other crimes.
Legal activist Montgomery Blair Sibley has filed several motions in the case, attempting to determine the details of how the improper and illegal order of dismissal of the indictment of Elizabeth Ann Duke was arranged. He believes that the Obama administration got a judge to dismiss the charges in return for lenient treatment for the judge’s son in a federal drug case.
Donna Joan Borup is another fugitive anticipating leniency. In a radio broadcast about the case in 2013, the FBI noted that Borup, also considered armed and dangerous, became violent during a demonstration at JFK International Airport in Queens in September 1981 and tossed a caustic substance into the eyes of a Port Authority police officer who was on duty at the time. The officer was left partially blinded.
A pattern is clearly developing whereby associates of Ayers and Dohrn are getting sympathetic attention from the White House and the Justice Department as they seek to escape justice for their crimes. The campaign is paying off because the media refuse to pay attention to the motive behind the madness of such appearances of Bill Ayers on Fox News.
On Wednesday Bill Ayers said,  I will be participating in a press conference in Washington, D.C. at the National Press Club to provide details about the effort to get the Obama administration to issue pardons for a series of so-called “political prisoners.”
In this context, the purpose of the Ayers appearance on Fox News was clearly to add impetus to this campaign, creating the impression that these “radicals” may have gone too far, but that it was long ago and the country should let bygones be bygones. One can easily envision an Obama pardon statement to that effect for Ayers’ comrades. Ayers himself may be angling for a Nixon-like pardon, giving him immunity from crimes that may have been committed.
Back in 2008, Obama had said, “This guy [Ayers] is not part of my inner circle, he doesn’t advise my campaign, he’s not going to advise me as president.” Obama also said about Ayers, “…I assumed that he had been rehabilitated,” a statement at odds with the fact that cold cases such as Park Station are still open and that a federal grand jury can be called to solve the crime.
Tragically, Megyn Kelly permitted Ayers to lie about the late Larry Grathwohl, an FBI informant and Vietnam veteran who had testified about how the Weather Underground killed San Francisco Police Sergeant Brian V. McDonnell in 1970 in the Park Police Station case. Grathwohl, who testified under oath about Ayers’ admission that his wife Bernardine Dohrn had planted the bomb that killed McDonnell, had also documented the ties between the “domestic terrorists” in the Weather Underground and the Cuban intelligence service, the DGI. But Ayers, on the Kelly show, dismissed Grathwohl as a liar who had never infiltrated his group. In fact, the Weather Underground put out a “Wanted” poster on Grathwohl after they found out he was exposing their crimes to the FBI.

www.politico.com/magazine/story/2017/01/oscar-lopez-commutation-barack-obama-214685
On January 17, 2017, as one of the final acts of his presidency, Barack Obama commuted the sentence of 74-year-old Oscar Lopez Rivera, the Puerto Rican nationalist who had served 35 years of a 55-year conviction for the crime of “seditious conspiracy,” as well as attempted robbery, explosives and vehicle-theft charges. Thanks to Obama’s intercession, Lopez will be freed in May.

Have you ever wondered why Obama did not pardon Army Sergeant Bowe Bergdahl?  He ransomed several notorious Taliban terrorists in exchange for Bergdahl, and Obama’s National Security Advisor proclaimed him an American hero.
Bergdahl never received mush passion for his case from the Left, and Obama had pledged to be a man of the Left on the national and international stage.  He was out to please the Left in all he did.
For instance, he pardoned Chelsea Manning, but he failed to pardon Bergdahl.  During Obama’s last days in office, he reemphasized his commitment to the Left.  Therefore, he pardoned Manning, because of LGBT politics.  Don’t get me wrong, I agree with his pardon of Manning.  Manning was a whistleblower, and there should be protections for whistleblowers.
Bergdahl would have been pardoned if he was a converted Muslim; evidently he wasn’t, or he would have been pardoned by Obama.
Could there be another reason Obama did not pardon Bergdahl?  I am sure Obama would not have left this controversial case for President Trump…just to cause more trouble for him.
Bergdahl’s attorneys are now claiming their client will not be able to receive a fair trial under President Trump. Anyone surprised?
As the trial approaches MSM is sure to bash Trump in some way, as he did comment on Bergdahl during his campaign.

I agree with everything he said.

As far as his pardon of Joe Arpaio, I have never been more grateful to President Trump.  Joe Arpaio is an American Patriot and a man we need on our side.

2,619 views
READ  Joe Biden Seems To Get Lost As He Struggles To Tell A Story About Amtrak
READ  FRAUD! Facebook/Big Tech Lying About Censoring Trump and Conservatives | Tom Fitton

14 thoughts on “While The Left Complains About President Trump’s Pardon Of Joe Arpaio, They Condoned Barack Obama’s Pardoning Of Terrorists.”