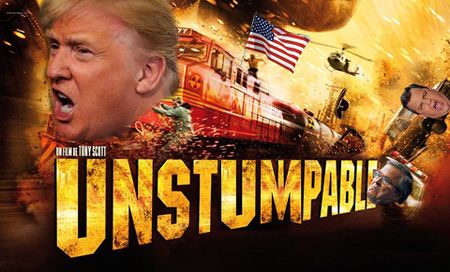 If you were paying attention to the news cycle on Cable TV lately, President Trump was relentlessly smeared , all weekend long (and more) in a sickening fashion. Talking heads kept judging him: his reaction to this, his reaction to that… Any other person except from Trump would’ve had a nervous breakdown by now in these conditions.

This is not even an attack on Trump and his family, but an attack on the American people who voted for him in 2016. And don’t tell me about that “popular vote” crap, that’s not what the Constitution provides. We have an Electoral College, and just because DEMs run up numbers in California, doesn’t mean that Hillary Clinton should be president. Every POTUS that was elected, was elected through the Electoral College, not through popular vote.  So we’re not falling for that.

Every single thing this man does is hyper-investigated, they’re obsessed over him. Why does he tweet? Because that’s the only way to get his message out, the only way to communicate with the American people. He goes around the media, and they hate him for it, because they want to sabotage him. They feel they were within reach of their utopia, of their paradise. They had their dear leader Barry for 8 long years turning the country inside out and upside down, the great Hussein Obama selling out America and destroying our national sovereignty and our borders. They thought they were within reach. And then Hillary lost. How could this happen?

Especially to lose to Donald Trump, this outsider, this real estate guy, this TV guy who’s never been a politico…how could she possibly lose to him? All the money poured into her campaign, all the votes (legal and illegal), all the media supporting her, all the elites behind her, and she still lost. How was this possible? Something must be wrong with the American people, right?

Something’s wrong with the Constitution (the Electoral College sucks), and the left must fix this. How? Destroy Trump’s presidency via this Russian meddling narrative, hatched by the Clinton campaign through the Fusion GPS dossier. They take this Russian narrative, run it up to CIA/FBI/the media, push the narrative, he wins, and it’s been Russia ever since. They don’t have squat, not a damn’ thing on Trump. And he fights back. That’s what they hate the most. He fights back every single time.

He’s an innocent man, he hasn’t done anything to deserve this. And they can’t stand him fighting back. They thought they would’ve broken him by now, and another man, they would have broken by now. They thought they had him on the ropes, but they never did. They’re trying to criminalize his administration, they’re trying to impeach him if they get the numbers, they’re trying to smear him and character-assassinate him  every conceivable way they can. Iran threatens the US, and Trump pushes back, and now we’re told that’s because he tries to distract us. No president has ever been treated this way. Barack Obama was treated like he was a king. The corporate media still slobbers all over him. Nobody has done more damage to the US Constitution than Barack Obama and the judges that he appointed, who’ve tried to undermine Trump when it comes to immigration, or whatever it comes to. Completely out of control.

I’ve never seen so many low IQ, and I mean truly stupid people, in mass media bashing Trump 24/7. They’re all out of the closet hard core leftists. CNN has become grotesque due to their obvious political bias. And nobody’s watching anymore. MSNBC is the same. Filled with DEM operatives.

These aren’t serious people, but they’re day in and day out engaging in big lies and little lies about Trump. He responds, he’s defending himself, and they hate him for it, because they’re not used to that. They love it when Republicans roll over, like Mitch the Squish McConnell, or Paul Ryan. This guy won’t roll over, that’s why the American people voted for him in 2016. And they still insist he juggles when they tell him to juggle. And it ain’t gonna happen.

The media in this country is corrupt through and through, and it’s ideological through and through. Trump is right to call them fake news.  Some reporters/pundits really are the enemy of the people when they distort news, or when they use certain guests in order to promote an agenda, when they lie by omission, when they continue this drumbeat, which encourages guests to call Trump a Nazi, who lie about immigration (that we’re running Nazi like camps at the border) in their news-programs. This is unprecedented.

These people are either historically illiterate or ideologically driven. Or both. That’s not media providing information to the American people, these are propagandists pushing an agenda. They hate Trump, they loved Obama, and their reporting shows it. An example: Stormy Daniels is a non story. It was an NDA signed, so why is there a story? Because she violated an NDA, and they’re now trying to embarrass the POTUS. Week after week, a porn-star and her crackpot lawyer, all over CNN and ABC. Why? Because they want these degenerates on national TV smearing the POTUS. Or that 28 year-old moron “democratic socialist”, which is the code-word for communist, who won a primary in New York city, with 17,000 votes. And now the whole world’s supposed to change. She’s an idiot. The more she talks, the clearer it becomes she’s an idiot. Why is she a hero in the MSM? Because she’s a soft Marxist, a socialist, even if she doesn’t even know what she’s talking about. And the statist progressive ideologues in the media keep pushing these losers. These nobodies. Because they have to push the agenda. And what’s the agenda?

To abolish ICE? The federal agency that tries to arrest people arrived here illegally and deport them back to their shithole country of origin? We should abolish them and what? Strengthen the IRS? Adopt the universal basic income? This is not what America’s about.  Or the latest on the list: free college. Why? So we can spend more money on tenured communist professors and expand leftist indoctrination camps aka university campuses even more? This the agenda they push. The left never talks about our national debt. When was the last time CNN talked about our 19 trillion+ national debt? Or MediCare/social security going bankrupt? Instead they have a porn-star to talk about it day in and day out.

This is not freedom of the press, this is Bolshevik propaganda.