why is jpm hedging against a downturn in the "greatest economy ever"? pic.twitter.com/7t4pztmYHB

The worst first quarter since 2009, according to Challenger, Gray & Christmas.

Layoffs hit their highest level for a first quarter in 10 years as 2019′s job market got off to a shaky start, according to a report Thursday from outplacement firm Challenger, Gary & Christmas.

Total announced cuts hit 190,410, a 10.3 percent increase from the fourth quarter and 35.6 percent jump from the same period a year ago. The level was worst period overall since the third quarter of 2015 and the highest level for a first quarter since 2009 as the economy was still mired in the financial crisis.

The Decade of Deleveraging didn’t quite turn out that way. Total world debt has grown by $100tn to around $250tn since 2008. But the face of the debts has changed. Companies took advantage of rock-bottom interest rates to go on their own borrowing spree. t.co/tLlZnjfyGa pic.twitter.com/XUcCvEIvgg

“I personally think the Fed should drop rates, They really slowed us down, in terms of quantitative tightening, it should really be quantitative easing…

Because economy is so strong

Next Phase in Trucking Boom-Bust Cycle Has Started

From “capacity panic” to “overcapacity” in less than a year? 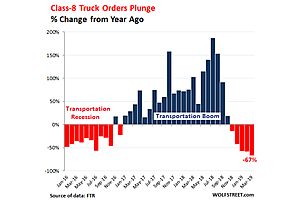 Risky Company Debt Is Getting Riskier

“Lenders may need to resort to the courts more and more in the next downturn,” 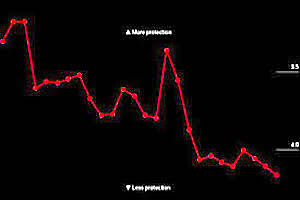