tldr; The virus is a laboratory construct and when the masses find out it will cause another wave of panic.

I first want to start by saying I’m an autist and not a geneticist or have a degree in bioinformatics. If you want to read the a good source that you can use for your own dd here you go: medium.com/@yurideigin/lab-made-cov2-genealogy-through-the-lens-of-gain-of-function-research-f96dd7413748

But let’s be honest, most of the words in that article are more the two syllables and you guys won’t get passed the first couple paragraphs so I’ll summarize the most important parts.

It is 96% identical to Bat corona-virus RaTG13. Most of the differences are found in the Receptor-Binding Motif (RBM). This is the RNA that is responsible to make the S2 Glyco-protein (the thing that attaches to the ace2 receptor to infect your cells).

If you just look at just the RBM Sars-Cov-2 is almost identical to a Pangolin Corona virus MP789 from Guangdong.

The things I just told you are all known by the public. The consensus that is being publicly spoken about is that these two virus or mutated variations of them infected the same host in the wet market in Wuhan and through genetic recombination created the BatSoup Virus we have today. Which would absolutely be possible. But here is where is gets screwed…. 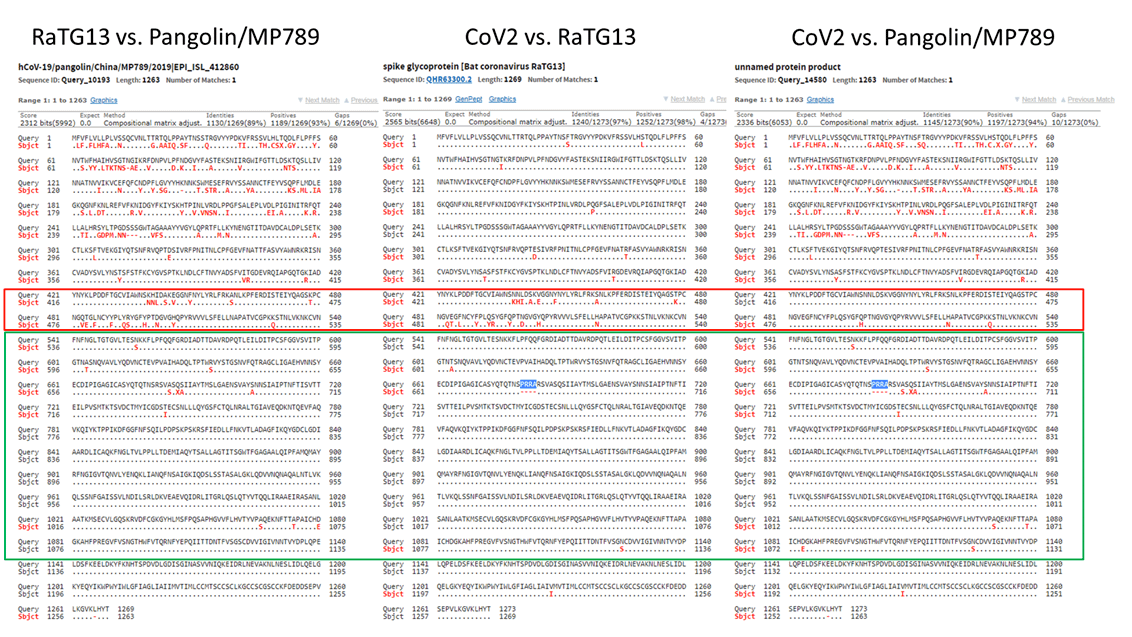 That image is an amino acid (AA) comparison between all 3 viruses. Each letter represents a different AA. The red letters are where the AA’s are different between the strains being compared. The smoking gun is the highlighted four AA series PRRA. Underneath that are 4 red stars indicating an insertion. While this can happen naturally, it is highly unlikely this is the case. Especially since this little 4 AA insertion is incredibly important and the reason why Sars-Cov-2 is highly transmissible.

The amino acid after PRRA is R. This forms the sequence RRAR. RRAR is what is called a polybasic ferin cleavage site. Ferin is a special molecule in our bodies and it goes around and finds these site and cuts the amino acid chain at the cleavage site. Now the author goes into detail on the mechanisms but i don’t really understand it. Basically it makes the virus highly transmissible and virulent.

Adding these cleavage sites is very common in Gain of Function research. Where scientist make virus more functional in human models to anticipate future threats and make therapeutics to counter these phenomena. My theory is that the Wuhan Institute of Virology was playing around in the lab and forgot to clean their shoes and this got out accidentally. When the Chinese found out they tried to keep it a secret and that’s how it spread world-wide.

This is the evidence that trump has been talking about about this virus coming from a lab. If I found this in between jerking off and being a degenerate on Robinhood then it’s only a matter of time before it’s on every news station around the world. That’s when the next leg down starts.

Panic will set in again after this comes out and the virus tears us a new one when we start to open up again. This is what will give the bears their strength.