Yesterday’s article caused quite a stir. I wish that represented the worst of what’s to come, but it doesn’t.

Prepare to be taxed.

The growing mantra from the political class is that “the wealthy aren’t paying their fair share.” While I am all for paying appropriate tax levels, the fact is that this has nothing to do with fairness and everything to do with seizing capital by any means possible.

Because the Everything Bubble has burst, and the political classes are desperate to get access to more capital to finance the bloated social spending/welfare/ government budget.

Consider that last year, when the economy was supposedly growing at over 3%, the US ran a $1 TRILLION deficit… meaning the government spent over $1 trillion more than it took in via taxes.

That $1 trillion had to come from somewhere, and with bond yields rising, it’s becoming more expensive for Uncle Sam to issue/ roll over debt. 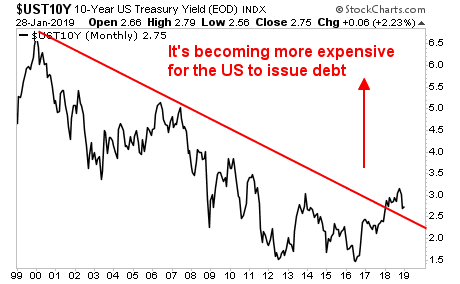 As a result of this, the political class is looking for new means of acquiring capital.

As I detailed in my bestselling book The Everything Bubble: The Endgame For Central Bank Policy, this will involve wealth taxes, wealth grabs and more.

And if you think this will only be targeted at the very wealthy, consider that the IMF has already proposed a 10% wealth tax on NET wealth for everyone.

This is just the beginning. We’ve uncovered a secret document outlining how the Fed plans to both seize and STEAL savings.

We detail this paper and outline three investment strategies you can implement right now to protect your capital from the Fed’s sinister plan in our Special Report The Great Global Wealth Grab.

We are making just 100 copies available for FREE the general public.

You can pick up a FREE copy at: