Via The Raconteur Report 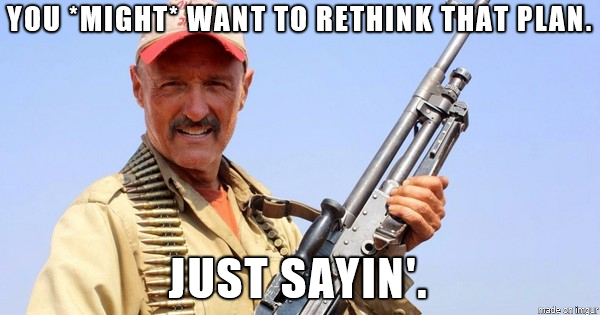 Politico “After failing to stop Kavanaugh’s confirmation, Democrats wonder if it’s time to be more ruthless.”

Yes, the Left is really that fucktarded.

Make one move in that direction, and this is where your party ends: You will be hunted for sport, tortured for pleasure, and dissected, alive, for practice.
And then, your families, lest the error multiply.

You’re not as smart as feral hogs, not as hard to find as deer, and not as wary as bear, all of whose heads decorate legions of trophy walls from coast to coast. You’ll last about a New York minute, which is ironically fitting.

Nobody’s going to give you a proportional response, they’re going to pay you back 1000:1 at minimum, and most likely, simply decide that you’re all a luxury we can no longer afford.

You’re going to start disappearing in batches, and your heads are going to be used as decorations in the town square. People will tell their grandkids about how you all went suddenly and completely extinct, and then your final resting places will, likely as not, be roadside ditches as you flee, in scenes reminiscent of the Highway To Hell from Kuwait City to Baghdad circa 1991. (And FTR, Canada doesn’t want you, and Mexico will eat you for lunch, and those are the friendliest responses to your would-be refugee status. Cuba is liable to just sink your rafts at sea, and let sharks and crabs solve that problem without letting it get to their shores.) What happens to you will be used to frighten children around campfires for decades, and then you’ll be completely forgotten.

READ  Think Fauci’s Emails Were Bad? It’s Nothing Compared To What You’re About To Find Out!

And everyone else will nod their head, cluck their tongues, and mutter something like “Fucked around and found out…”

There won’t be mass graveyards, you’ll be scattered to the winds, or simply dumped.
A burned down house here, a toasted car there, and a lot of random body parts scattered by scavenger animals and carrion birds, until you devolve to coyote shit, maggot picnics, and worm food. And neither gated communities nor hired help are going to stop the mob or take a bullet for you when your turn comes, as you seem to wish with all your being to happen. Like Iraqi “police”, when the time comes, there’ll be open gates, little piles of empty uniforms, and vacant guard posts between you and a brief but frightful reckoning, which you’ll greet with one helluva surprised look on your faces.

Nobody holds remembrance days for countless numbers of douchebags strung up from Hell to breakfast since pre-Revolutionary War times, at crossroads and gallows oaks from Maine to Mendocino. Savvy investors will go deep on rope and wire for what’s in store for your ilk.

Committees of Vigilance, posses, and saddle-borne juries have ever had a ready solution to the problem of brigands and terrorists on this continent, and you’ll be only a recent and yet unlamented chapter in that saga.

Your party’s mascot will be either the dodo bird, or the passenger pigeon, and your living acolytes as numerous as either.

As it is, on the current course and speed, you’re set to become the Whigs of the 21st century.

But if you just push a little harder, you can become the Jacobins or Royalists, who fed the hunger of Madame Guillotine with equal gusto, in their turn.

Keep pushing, will you?
Well, if you do, 600M guns and half a trillion rounds of ammunition await your decision.

On average, those opposed to your would-be reign of terror will shoot twice, and go home, and you’ll be 60-70M votes short in every election from here on out.

Call that toss in the air.
Some folks are getting tired of waiting, and may decide to start early.

And at that, they’d merely be giving you what you’ve already got coming.

As perennial only children raised by helicopter parents, you’ve mostly never learned that even your own brother, whom you’ve picked on relentlessly, will eventually break a table leg over your head when you push that last button. You’re about to learn that lesson head-first.

Americans are a patient and long-suffering people. But not infinitely so.
And frankly, we’ve had just about enough of your bullshit, your threats, and your unhinged frothing lunacy, from top to bottom, from evil leadership to kneejerk chanting minions.

You’re fate is hanging by a thin whisker, and you’re dangling yourselves over the abyss on a fraying shoestring of goodwill.

And you just spent a solid month burning up the rule of law and presumption of innocence.

See how that level of jurisprudence serves you when you’re the ones in the dock.
Some mistakes in life you don’t get to make twice.

This won’t be The Oxbow Incident, with all the judicial trimmings.
It’s going to be Riot Control in Soylent Green. The trucks are warming up around the corner, and the scoops are coming.

You might  want to call that party off before it starts. Because once it does, it’s not going to be half-assed: it’s going to be for keeps. And you’re going to get sorted out once and for all.
No lawyers (who, indeed, are likely to be standing beside you when this kicks off), and no appeals. At least not any this side of pearly gates.
For keeps.