" the pace of dividend cuts for the third quarter is at a level that is consistent with recessionary conditions" t.co/eNfb40qQMl

Despite having the potential to be the best quarter in 2017, the pace of dividend cuts for the third quarter is at a level that is consistent with recessionary conditions being present in the U.S. economy. Based on our near-real time sampling of dividend cut declarations, those conditions are largely concentrated in the oil and gas industry, which has accounted for 23 of the 37 dividend cuts announced since 1 July 2017. The financial and real estate industries rank second, accounting for 10 of dividend cuts that have been announced so far during 2017-Q3. 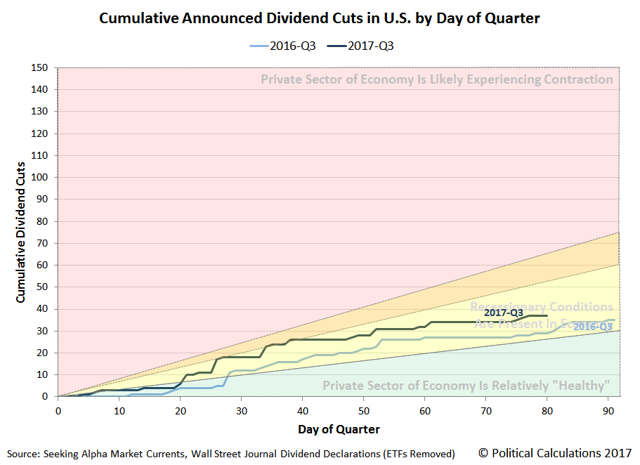 Something something retail left to hold the bag pic.twitter.com/rG45qTLz1B

Toys R Us couldn't even survive in a zero lower bound. LOL. Is Best Buy Next? pic.twitter.com/RjX9oLzkps

The U.S. Economy Is Dead in the Water

Meanwhile, back in the U.S.…
Business revenues (sales) are becalmed… growing at less than 1% a year over the past 10 years. And that’s before you account for inflation!
And business profits are going nowhere. They’re rising at a rate of about 2% a year… or roughly equal to the rate of inflation.
Household incomes and hourly wages – though subject to a lot of fudging – are dead in the water, too.
Officially, they are now back to where they were at the end of the last century.
But for some segments of the population – men with no college education – the situation is catastrophic; they’ve lost real income for the last 50 years.
A dead man lies immobile for a long time. But a debt-fueled economy cannot even sit down. It is inherently unstable. It must move forward… or collapse.
Consumers spend money now they hope to earn later on. The feds, too, promise benefits they can afford only if the economy – and tax revenues with it – grows fast enough.
Over the next 10 years, the U.S. government is on course to spend $10 trillion it doesn’t have. It has also committed to a further $80 trillion in entitlements for which it has no known source.
Only growth can save it.
But like a bicycle that has slipped its chain, you can pedal as hard as you like; you still won’t get anywhere. The only thing that may help the economy now is a major tax reform.
But that is almost impossible…

The Federal Reserve is setting America up for economic disaster

Workers lost because their spending power diluted drastically over the past 10 years. The costs of housing and energy have continued to rise in areas where the highest concentrations of jobs are located. For example, a young college graduate who wants to earn a high salary in the tech industry has to live in Silicon Valley, where even a base salary of $100,000 won’t enable them to afford to purchase a home there. Home prices are so out of line with average salaries that cities like San Francisco and Los Angeles are seeing an epidemic of homelessness never experienced since the Great Depression of 1929.
Savers have lost because the interest income they were counting on earning from their lifetime of saving has dwindled to less than nothing. These days, in most cases, you actually have to pay the bank to keep your money there. And so many retirees have had to tap into their home mortgages or take on additional consumer debt merely to survive. As America faces the largest retirement boom in its history — the retiring baby boomers — more than two-thirds of them do not have enough savings to retire comfortable. And on top of that, the Social Security system that was to be a back-stop against poverty for older Americans is practically insolvent.
The unwieldy national debt also causes friction for entrepreneurs. Governments have sought to increase taxes, regulations and fees on entrepreneurial activity in order to service the ballooning debt. This has sucked critical capital out of the system that entrepreneurs need in order to grow businesses and drive employment. With consumers still reeling from the great recession, demand for goods and services is lagging employment growth by a significant margin, further constraining opportunities for entrepreneurs.
The great project to rescue the American economy by the Fed has hit an obvious wall. The debt it used to goose the economy is now gumming up the system and constraining real growth. The looming question of what actually happens when the debt bubble finally bursts is one that not even the soberest economists at the Fed have been able to confront effectively. Unless we deal finally with the false notion that “central economic planning” can replace actual capitalism as the driver of American growth, we may be in store for far, far worse.

READ  The immediate future for financial markets and the real economy looks extremely perilous.
Toys R Us files chapter 11, it looks like Best Buy might be next. The entire economy is a myth, the stats, the stock market are all manipulated. The Fed has been manipulating the economy since they came into power. The global economy is out of control and the debt gdp ratio is hitting an all time new high. Russia decides to end the dollar at it’s ports.
1,979 views

2 thoughts on “You've Been Warned…. Buybacks Slowing Down, Dividend Cuts Soaring, The U.S. Economy Is Dead In The Water”