I’m not sure where to start. I’m not sure how all this is possible. I guess let me start by talking about Apple, the technology giant. Everyone loves Apple, it’s one of the best companies in the entire world and this last year the stock has gone up around 100%. Pretty remarkable considering it added almost one trillion dollars in market capitalization. Does anyone care to question how it has gone up this much? What has it done? Well, let me tell you guys a little secret. In 2015, Apple had the SAME earnings it had last year, but the stock was up 100%. How can this be? Their earnings per share went up. Do you want to guess why their earnings per share went up? Because they bought back their stock. Now, with all that being said, Apple is one of the most profitable companies in the world and are capable of buying back that stock. What worries me and what I KNOW is happening is that companies, due to this low interest rate environment (the interest rate is basically 0), are taking out loans like it’s free money. To their defense, it virtually is. What they’re doing with this money is buying back their shares, which allows for their earnings per share to increase, and the stock follows. To summarize, some companies are financing their share repurchase programs by taking out loans because the interest rate is so low.

With that being said, I’ll go into my next points and information. Zombie companies are firms that cannot pay their principle debt, only the interest on their debt. For example, if you take out a loan you can’t pay the principle, just the interest. Zombies companies make up close to 20% of the S&P 1500 index, which is much more broad than the S&P 500 index. These companies literally cannot service their debt. There’s four things you can obviously do with debt.

The federal reserve of the United State is starting to devalue to dollar. In 2008 after the great financial crisis, we had limited QE (Quantitative Easing). Now, the fed has literally said we will give whatever money is needed to stimulate the economy. We now have UNLIMITED quantitative easing. Not only that, but they have been buying back corporate bonds and treasury notes like crazy. There will be inflation in the near future, believe me. There’s literally NO WAY out for these companies other than the DEVALUATION of the dollar.

What’s going on is that these companies are being propped up by these free interest rate loans. In a normal interest rate environment, many would already be bankrupt and out of the game. And think of this, if the banks stopped or whomever gives out the loans stops, and cuts of the tap to these companies, they’ll go under and everyone will lose the entire investment. So they HAVE to keep loaning the money.

I don’t understand why the federal reserve lowered interest rates so much from 2015-2018. Recessions aren’t horrible things, they’re simply part of the cycle of capitalism. Their QE has prevented them and now we are left these a bunch of companies on life support leeching from the system.

I have absolutely no clue what happens from here. This problem has only gotten worse in the last few years I’ve been following it, and I decided to make a post about it. In my opinion, and it’s not professional, but I believe the US dollar is going to crumble in the next decade or so. I actually think that our financial system might be completely propped up by these HISTORICALLY low interest rates and when they go negative, WHICH THEY WILL, everyone better watch the fuck out. Gold and bitcoin prices have been hitting all-time-highs due to the realization that the federal reserve of the United States has gone to war with the US dollar. Buckle up.

This is serious shit. 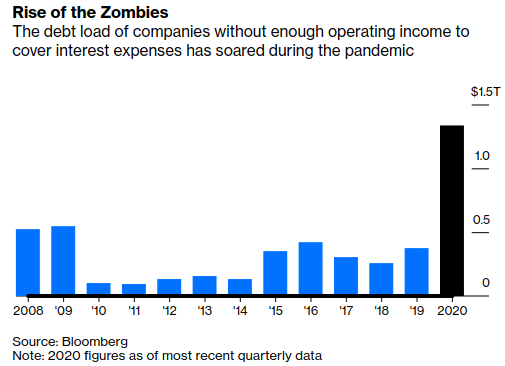