Federal workers get $0 pay stubs as shutdown drags on

OGDEN, Utah (AP) — Federal workers received pay stubs Friday with nothing but zeroes on them as the effects of the government shutdown hit home, deepening anxieties about mortgage payments and unpaid bills.

All told, an estimated 800,000 government employees missed their paychecks for first time since the shutdown began three weeks ago.

Fuming employees posted pictures of the $0 pay stubs on Twitter and vented their frustration as the standoff entered its 21st day. This weekend, it will become the longest shutdown in U.S. history.

Some Democratic lawmakers seized on the empty pay stubs as a way to renew criticism of President Donald Trump, who triggered the shutdown over his demands for funding for a border wall.

Sen. Tim Kaine of Virginia tweeted: “It should be payday for hundreds of thousands of federal workers. But thanks to Trump, many are actually getting pay stubs like this. He’s treating them like the countless contractors he stiffed throughout his business career.”

Roughly 420,000 federal employees were deemed essential and are working unpaid. An additional 380,000 are staying home without pay. While furloughed federal workers have been given back pay in previous shutdowns, there is no guarantee that will happen this time.

The dubious distinction comes on the same day hundreds of thousands of U.S. workers start to miss paychecks. About 800,000 federal employees are either furloughed or temporarily working without pay as the closure persists. 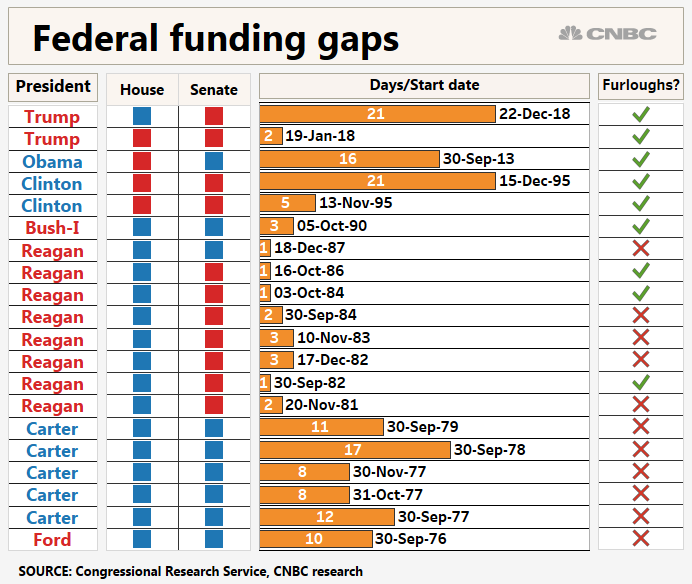 Lawmakers have failed to fund nine departments, or about a quarter of the government, as President Donald Trump demands more than $5 billion to fund his proposed border wall. The president has threatened to veto legislation passed by the Democratic-held House to reopen the government temporarily, which has deterred the GOP-controlled Senate from passing it.

The funding lapse also has an economic cost. The lack of worker paychecks and the shutdown’s potential effects on tax refunds, mortgage applications, food assistance programs and consumer sentiment could hit the U.S. economy to the tune of at least $2 billion a week, according to an estimate by Wells Fargo retail analysts. Meanwhile, S&P Global gave a “conservative” estimate that the closure had an economic effect of about $3.6 billion through Friday. The financial services company expects the shutdown to trim about 0.05 percent, or $1.2 billion, off quarterly GDP growth for each week that it goes on.