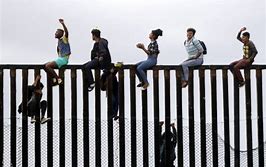 Federal law enforcement based on the U.S.-Mexico border are expected to encounter 1.1 million people trying to cross illegally by the end of the fiscal year Sept. 30, despite Mexico’s assistance stopping migrants on their journey north.

Senate Homeland Security and Governmental Affairs Chairman Ron Johnson forecast the 1.1 million figure during a committee hearing Tuesday based off the number of people arrested for illegally entering between border crossings and those who presented at ports of entry but were deemed ineligible for admittance.

As of June 30, U.S. Customs and Border Protection personnel had made contact with 905,926migrants, including 694,229 who entered the country without permission. The 694,229 figure nine months into fiscal 2019 was more than double the 310,000 who illegally crossed the southern border in all of fiscal 2017.

This year’s number has already surpassed the 683,178 encountered both at ports of entry and between ports in fiscal 2018.

Johnson, a Republican from Wisconsin, said the Border Patrol agents who work the spaces between border crossing points took 3,000 people into custody on an average day in June. The highest-ever day was recorded earlier this year when 4,652 people were arrested.

This fiscal year, nearly half a million children who traveled alone or people who arrived with a family member have been taken into custody.

READ  Progressive policies in action: Homelessness in LA County expected to skyrocket by 86% in next 4 years

To deter migrants, Trump administration pushes elaborate scaffolding at the border and on the books

In court, at the border and through arm-bending negotiations with regional neighbors Mexico and Guatemala, the Trump administration has been devising elaborate new immigration measures to buttress against potential judicial setbacks and the possibility of a new migration surge this fall.

The effort proceeds along two main fronts: a long-range push to narrow access to the U.S. asylum system for migrants seeking protection, and a more immediate attempt to create new deterrents by enlisting foreign governments instead of congressional Democrats.

Late Friday, the administration announced a major new migration accord with Guatemala that would make the country a faraway repository for asylum seekers from other nations. It has been rolled out so hastily that U.S. lawmakers have yet to receive a copy.

Attorney General William P. Barr then cinched the asylum system tighter on Monday, issuing a ruling that makes it more difficult for applicants to seek protection when their family members face threats. Advocacy groups say the change could lead thousands of claimants to lose the ability to seek refuge in the United States.

The federal Homeland Security agency tasked with removing people illegally present in the country has released a couple hundred thousand immigrant families into the interior of the United States since late December, according to data obtained by the Washington Examiner.Those let loose will not be be subject to deportation, at least not until a hearing they are supposed to attend that is years away.

A total 218,400 people who either illegally entered the country or showed up without proper documentation at a port of entry along the southwest border were let go from Immigration and Customs Enforcement custody and set free in the U.S. between Dec. 21, 2018 through July 28.

Most common age for whites is 58, for Hispanics 11…

The births of white babies outnumbered those of minorities by a hair, according to new U.S. Census Bureau data that also showed that the most common age for whites is 58 versus 11 for Hispanics.

Census had expected minorities to overtake white births, but the data shows that it hasn’t happened as fast as expected, according to a Pew Research Center analysis of the data.