Demand for high-denomination U.S. bills is not slowing down, despite less demand for cash in general.

The amount of U.S. $100 bills across the globe in circulation hit its highest level in history last year, according to new data from the Federal Reservereleased this week. That total grew by about 7 percent, or $92 billion year over year, to a record $1.3 trillion worth. 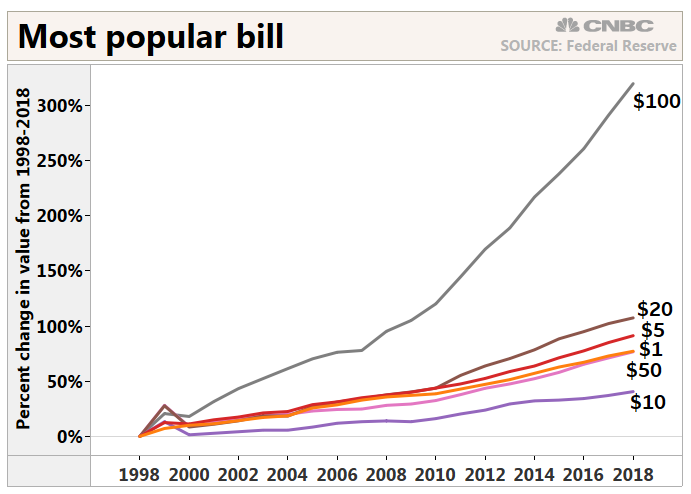 The number of outstanding C-notes has doubled since the financial crisis, according to the Fed. But it’s probably not due to real demand to spend those large bills.

Growth in U.S. bills between $1 and $20 was much weaker at about 2.6 percent year over year. That slowed from 3.6 percent a year earlier. The weaker demand for small currency is likely due to a rise in mobile payments.

To put the demand in perspective, the rise in $100 bills was three times higher than the increase in small bills. That suggests that these large bills are being used more as a store of value, as the U.S. dollar continues to be the world’s reserve currency.

For the most part, economists believe the surge is due to people around the globe wanting to hoard cash — a similar force that’s boosted interest in cryptocurrencies. High-denomination currency notes are known as a preferred form of payment for criminals, given the lack of a transaction record, anonymity, and the ease with which they can be brought across borders.

Nicholas Colas, co-founder of DataTrek Research who has been tracking the $100 currency boom for about a decade, said he was expecting it to slow slightly. That has yet to happen and as he pointed out, we’re approaching the point where every human being on the planet could have two $100 bills in their pocket.

“Demand as a store of value far exceeds the demand for transactional cash,” Colas said. “It does lead to challenges if you want to track and deal with corruption, or not paying your taxes, or any of any other thing that cash also incidentally enables.”

While evidence is anecdotal and happens on a country-by-country basis, Colas said crime and use on the black market is a contributing factor in demand.