This is huge. Mike Wilson of $MS is spot on. t.co/PgD0bm6XaT

Lehman Brothers filed for the largest ever bankruptcy 11 years ago, on September 15, 2008. Many things changed that day, but the most lasting impact is arguably what’s happened to the money supply — what a chart pic.twitter.com/0B8gqTflLc

it should be obvious why trump is begging for negative interest rates, quantitative easing, and emergency tax cuts pic.twitter.com/L1QEcfZ7QM

Global fund managers have increasingly become more worried about the state of the economy, and according to Bank of America’s global fund manager survey, the risk of recession is at its highest since 2009.

The survey, released on Tuesday, surveyed 235 fund managers who manage a combined total of $683 billion, showed that 38% of fund managers expect a recession within the next year — the highest net percentage to say so since the depths of the financial crash in 2009.

The survey also showed that fund managers aren’t expecting great things from the economy, ahead of what’s expected to be a Federal Reserve rate cut this week. Just 21% of the fund managers expect a rise in short term rates in the next 12 months. 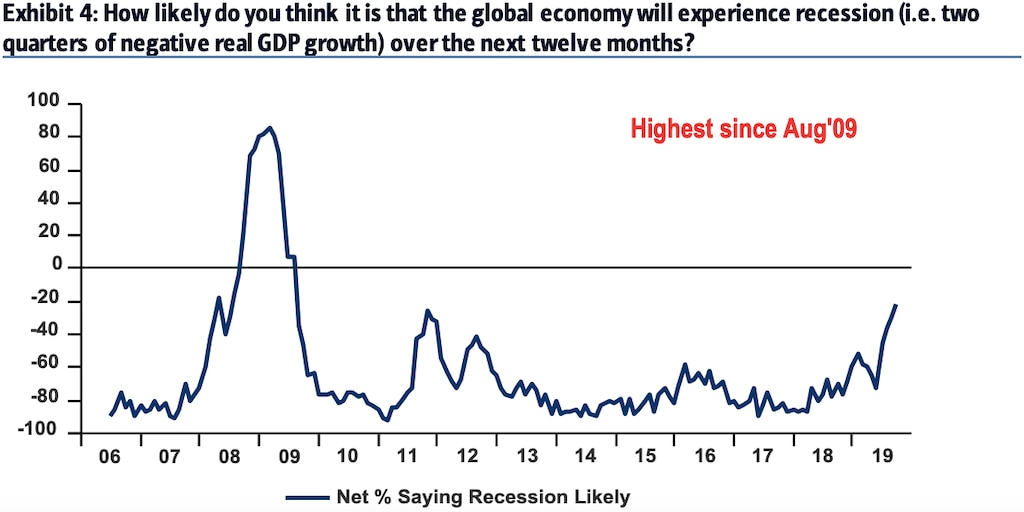