As for Iraq, the implicit gain was supposed to be access to Iraqi oil.

Setting aside the 12 years of “no fly zone” air combat operations above Iraq from 1991 to 2003, the U.S. has been at war for almost 17 years in Afghanistan and 15 years in Iraq. (If the word “war” is too upsetting, then substitute “continuing combat operations”.)

Since the burdens and costs of these combat operations are borne solely by the volunteers of the U.S. Armed Forces, the American populace pays little to no attention to the wars unless a household has a family member in uniform who is in theatre.

Permanent combat operations are now a barely audible background noise in America, something we’ve habituated to: the human costs are invisible to the vast majority of residents, and the financial costs are buried in the ever-expanding mountain of national debt. What’s another borrowed trillion dollars on top of the $21 trillion pile?

But a nation continually waging war should ask: to whose benefit? (cui bono) As near as I can make out, the nation has received near-zero benefit from combat operations in Afghanistan, one of the most corrupt nations on Earth where most of the billions of dollars “invested” have been squandered or stolen by the kleptocrats the U.S. has supported.

What did the nation gain for the tragic loss of lives and crippling wounds suffered by our personnel and Afghan civilians?

As for Iraq, the implicit gain was supposed to be access to Iraqi oil. As near as I can make out, the U.S. imports about 600,000 barrels of oil per day from Iraq, a relatively modest percentage of our total oil consumption of 19.7 million barrels a day.

(Note that the U.S. was importing around 700,000 barrels a day from Iraq before Operation Iraqi Freedom was launched in March 2003–and imports from Iraq declined as a result of the war. So what was the energy-security gain from launching the war?)

Meanwhile, Iraq exports over 2 million barrels a day to China and India, where the presumed benefit to the U.S. is that U.S. corporations can continue to produce shoddy goods using low-cost Asian labor that are exported to U.S. consumers, thereby enabling U.S. corporations to reap $2.3 trillion in profits every year.

(Before China joined the World Trade Organization (WTO), U.S. corporate profits were around $700 billion–less than one-third the current gargantuan sum. Isn’t this suggestive of the immense profits gained by offshoring production to Asia and reducing the quality of the goods being manufactured?)

Since “energy security”, i.e. access to oil, was the implicit reason for going to war, let’s ask: were all the sacrifices of lives and limbs and the direct costs of roughly $1 trillion worth the roughly $200 billion in oil that the U.S. has imported from Iraq– and if history is any guide, could have imported without going to war at all?

See also  In the US, for instance, most buyers rely on fixed-rate home loans for as long as 30 years. Adjustable-rate mortgages represented, on average, about 7% of conventional loans in the past five years. By contrast, other nations commonly have loans fixed for as little as a year"

It’s far easier to blunder into war than it is to blunder out of war. But hey, it’s certainly been profitable for a few at the top of the financial heap. 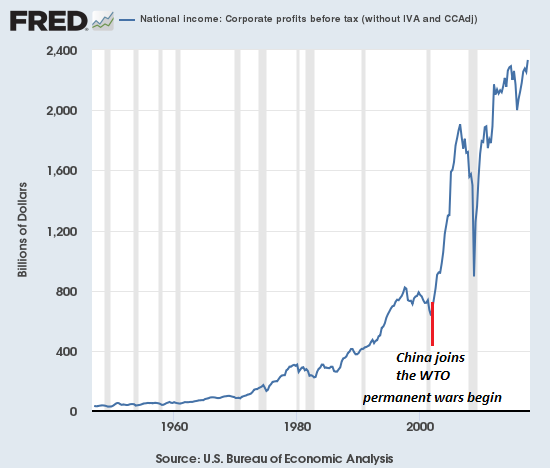