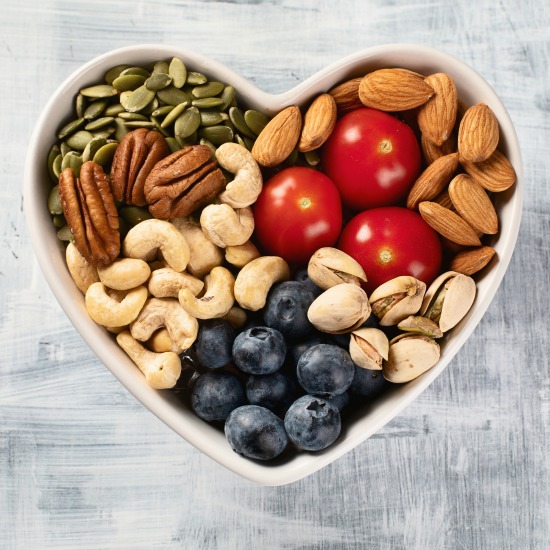 At best, stress can interfere with your happiness and productivity.

At worst, stress can be a slow killer: It can adversely affect your immune, cardiovascular, neuroendocrine, and central nervous systems, especially when it is experienced chronically.

Avoiding stress entirely is impossible. Many of the ups and downs of everyday life are simply out of our control.

For many, reaching for comfort foods that are high in sugar or refined carbohydrates during times of stress is instinctual. It is an attempt to self-soothe.

Unfortunately, this approach usually makes the problem worse. You feel guilty for eating “junk food”, which causes more stress. The next thing you know, you are trapped in a vicious cycle of stress and overeating.

But there is a bright side – how we respond to stressful situations IS within our control.

There are many ways you can reduce or manage the stress in your life. Good nutrition is one of them. Believe it or not, there are foods you can eat that have shown to have stress-reducing properties.

Stressful events (even relatively minor ones) can cause cortisol levels to rise to problematic levels.

Cortisol (a steroid hormone) helps fuel the fight-or-flight response – the psychological loop that fires you up to fight or run for your life when facing danger.

Think of it as your body’s built-in alarm system. When you are faced with immediate danger, increases in cortisol help you respond. The hormone works with certain parts of your brain to control your mood, motivation, and fear.

Your hypothalamus and pituitary gland (both located in your brain) can sense if your blood contains the right level of cortisol. If the level is too low, your brain adjusts the amount of hormones it makes. Your adrenal glands read those signals, and then fine-tune the amount of cortisol they release. Cortisol’s primary function is to increase blood sugar levels so your brain, muscles, and organs have enough fuel to get you through a stressful situation.

If you are under constant stress and your cortisol levels remain high, health problems including anxiety, depression, headaches, heart disease, memory and concentration issues, digestive troubles, and sleep struggles can all result.

High cortisol levels can increase the amount of fat you hold in your belly. This is called visceral fat, and it is particularly nasty. It is thought to play a larger role in insulin resistance – which may increase Type 2 diabetes and heart disease risk. Excess visceral fat is also linked to an increased risk of developing cancer, stroke, dementia, depression, arthritis, obesity, sexual dysfunction, and sleep disorders.

You don’t have to be visibly overweight to be at risk. Even relatively thin people can have too much visceral fat, which is why it is often referred to as “hidden” belly fat.

Chronically elevated cortisol levels increase blood sugar levels, which in turn elevate insulin levels. Some studies (including this one) have found this can interfere with fat loss – no matter what exercise or weight loss program you follow.

Cortisol causes food cravings, and those cravings tend to be strongest for carbs, especially sweet foods.

There is an extensive network of neurons (nerve cells that transmit information throughout your body) lining your guts. It is filled with neurotransmitters (chemical messengers), and it does a heck of a lot more than dealing with digestion and giving you “butterflies” when you are nervous. It plays a crucial role in diseases throughout your body – and in your mental state.

This network in your gut is called the enteric nervous system. It is often referred to as a “second brain” because it contains around 100 million neurons (that’s more than in your spinal cord or peripheral nervous system!)

A growing body of research shows there is an intricate link between the mental health and our gut microbiome.

One study found that both high-fat and high-sugar diets cause changes in gut bacteria that appear to be related to a significant loss of “cognitive flexibility,” or the power to adapt and adjust to changing situations. The effect was the most serious on the high-sugar diet, which also showed an impairment of early learning for both long-term and short-term memory.

Those findings are consistent with other studies about the impact of fat and sugar on cognitive function and behavior and suggest that some of these problems may be linked to changes in the microbiome –  the approximate 100 trillion microorganisms in the digestive system.

Studies have shown that glyphosate – the main ingredient in the herbicide Roundup – can damage the human microbiome. Because of the role gut health plays in mental well-being, avoiding food that has been exposed to the chemical is probably a good idea.

As you can see, eating an unhealthful diet and being chronically stressed can be a dangerous duo, in large part because of the impacts on cortisol levels and your gut health.

Thankfully, there are many specific foods and nutrients that have been shown to help reduce stress and balance overall mood.

The role of nutrition in stress management

A simple way to remember to eat a balanced diet is this: focus on nutrient density. This means trying to pack as many nutrients from whole foods as possible into every meal.

19 vitamins, minerals, and foods to explore the ways they can help you manage stress

Vitamin B12 (cobalamin): aids in the creation of red blood cells and nerves. Low levels of B12 can cause short-term fatigue, slowed reasoning, and paranoia, and are associated with depression. Dietary sources: fish, lean meat, poultry, eggs, milk, Swiss cheese, and fortified breakfast cereals

Tryptophan: An essential amino acid (this means your body cannot produce it – you must get it from your diet), tryptophan helps your body make niacin, melatonin, and serotonin. In order for tryptophan to be converted into niacin, however, your body needs to have enough iron, vitamin B 6, and vitamin B 2. Dietary sources: chicken, turkey, eggs, cheese, lentils, fish, peanuts, pumpkin and sesame seeds, milk, turkey, tofu and soy, chocolate

Omega-3 fatty acids: Omega-3 is an essential fatty acid that is important for brain health (it contributes up to 18 percent of the brain’s weight!). One study in Brain Behavior and Immunity showed a dramatic 20 percent reduction in anxiety among medical students taking omega-3. Other research has shown omega-3 fats work just as well as antidepressants in preventing the signs of depression, but without any of the side effects.

Blueberries: Anthocyanins – the pigments that are responsible for the deep colors of the tiny fruit – help with the brain’s production of dopamine.

Bananas: In order to make dopamine, your body needs the amino acid tyrosine – and bananas are a great source (almonds, avocados, eggs, beans, fish, and chicken are also decent sources). Bananas also contain B vitamins and magnesium, which can calm you down.

Pistachios: One study found eating two servings of pistachios a day lowered vascular constriction during stress, which means the load on your heart is reduced since your arteries are more dilated. Choose fresh organic pistachios: conventional ones carry a high risk of contamination by a carcinogenic mold called aflatoxin, and may be bleached or fumigated during processing.

Oatmeal: A complex carbohydrate, oatmeal causes your brain to produce serotonin, which creates a soothing feeling that can help you ease stress.

Zinc: An essential mineral that may help reduce anxiety, zinc is found in nearly every cell of the body and plays an important role in immune system functioning. Low levels of zinc in the diet can lead to a variety of ailments, including loss of appetite, mental lethargy, and depression. Dietary sources: roasted pumpkin seeds, cashews, pine nuts, almonds, dark chocolate, cheese, oatmeal, beef, oysters, pork

Vitamin D: Often called “the sunshine vitamin,” vitamin D is unique in that it is a vitamin AND a hormone your body can make with help from the sun. But despite the ability to get vitamin D from food and the sun, an estimated 40%-75% of people are deficient. Research suggests that low levels of vitamin D are associated with mood disorders and depression. Dietary sources: salmon, tuna, mackerel, eggs, cheese, fortified foods like orange juice and milk

Some vitamin D researchers have found that somewhere between 5–30 minutes of sun exposure between 10 AM and 3 PM at least twice a week to the face, arms, legs, or back without sunscreen usually leads to sufficient vitamin D synthesis. Indoor light therapy can help, too.

Dark chocolate: Chocolate is one of the most-craved foods in the world, and the reasons go beyond its pleasing taste and texture – it contains over 300 naturally-occurring chemicals, some of which make you feel happy via the release of certain neurotransmitters.

Here are a few of the feel-good chemicals in chocolate and their effects:

For more on the health benefits of chocolate, and how to choose the best quality, see Ten Reasons to Eat Chocolate.

Studies have shown that sipping a few cups of tea daily reduces stress, promotes healthy sleep, and boosts mood. Amino acids present in green and black teas have a calming effect on the body, reducing the adverse effects that stress can have.

A study from University College London discovered that tea drinkers de-stressed faster and had lower cortisol levels than those who drank a placebo. Although (caffeinated) black tea was used in the study, caffeine revs the stress response in many people, so stick to decaf and herbal teas.

Lemon balm is an herb that smells and tastes fantastic in a tea. It can help with mild depression and acts as a very calming sedative.

Chamomile can help relieve stress and anxiety and – bonus – it can even help you sleep.

Valerian root has anti-anxiety properties and has long been used to ease nervous restlessness and insomnia.

Passionflower has a range of benefits that all lead to stress reduction: muscle relaxer, relief from heart palpitations, seizure reduction, and general lessening of hyperactivity.

St. John’s Wort has been used for anti-anxiety relief for over 2000 years. While it is not clear exactly how St. John’s Wort works, it is believed to prolong the action of serotonin. It also often used for symptoms associated with sleep problems, SAD (seasonal affective disorder) and PMS.

Catnip isn’t just for felines: it has sedative effects and helps calm the nervous system.

Linden flower has been shown to help reduce stress and anxiety. It can be found in various herbal teas, by itself, or combined with Hawthorn and lemon balm.

Rosemary has long been used by herbalists for its calming effects and can be used in herbal tea.

In addition to single herbs, or for those who don’t really like drinking tea, a broad spectrum complex like Xivvium For Stress ( which combines herbs, vitamins, and nutrients such as 5-HTP, St. John’s Wort, and Valerian Root) can promote stress relief.

Daily life can certainly be stressful, but hopefully the tips above will help you manage it better (and, improve your health overall).