@Flamencotrs @TheGatorGamer Written in 1988 rulebook for the tabletop RPG Cyberpunk 2020. That’s some prophet shit right there. 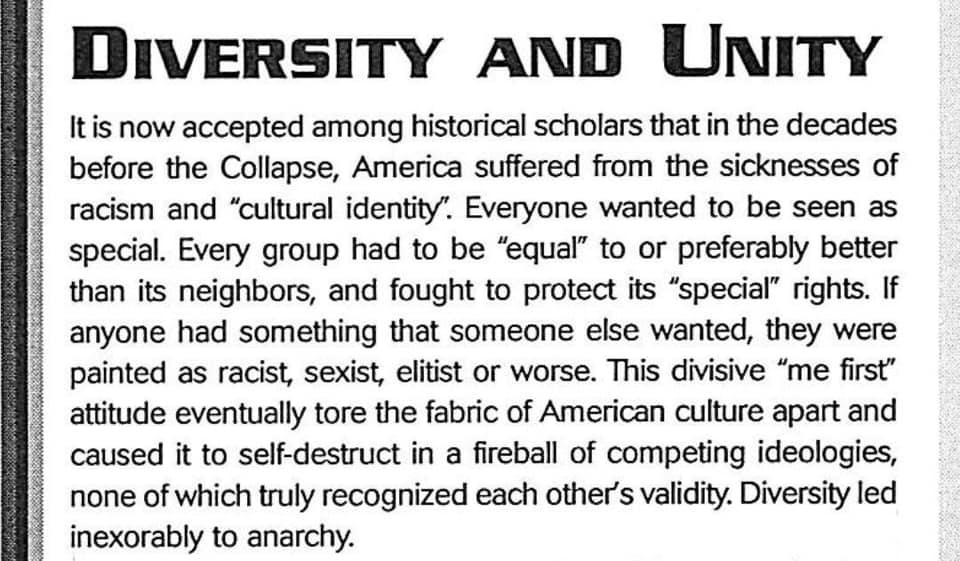 (‘Prophecy’ at the links above.)

“DIVERSITY AND UNITY
It is now accepted among historical scholars that in the
decades before the Collapse, America suffered from the
sicknesses of racism and “cultural identity”. Everyone
wanted to be seen as special. Every group had to be ”equal”
to or preferably better than its neighbors, and fought to
protect its ”special” rights. If anyone had something that
someone else wanted, they were painted as racist, sexist,
elitist or worse. This divisive ”me first” attitude
eventually tore the fabric of American culture apart and
caused it to self-destruct in a fireball of competing
ideologies, none of which truly recognized each other’s
validity. Diversity led inexorably to anarchy.”

(NOTE: Looks like the book’s release date is actually 1994.)
cyberpunk.fandom.com/wiki/Neo_Tribes