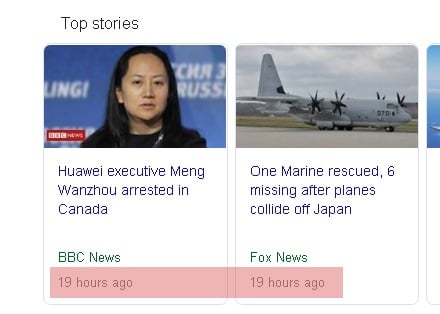 Around the same time as a Huawei executive was detained in Canada, for breaching Iran sanctions, two US military planes crashed near Japan. Could they be related? China is working on electronic warfare, so it’s possible they can mess up the electronics in planes. And there have been several US military mishaps in Asia recently.

A F/A-18 fighter jet with two people on board and a KC-130 tanker aircraft with five on board were involved in the incident about 200 miles off Iwakuni, Japan…

The Associated Press points out the recent crash comes after an incident where a U.S. Navy F/A-18 Hornet from aircraft carrier USS Ronald Reagan crashed into the sea southwest of Japan’s southern island of Okinawa.

Another incident happened in mid-October, AP reports, when a MH-60 Seahawk — also from the Ronald Reagan — crashed off the Phillippine Sea moments after takeoff.

The spat is between China and US/Canada. The speculation is whether China is causing US planes (and ships) to crash in the Asian region by way of electronic warfare.