The worship of mortals as demi-gods and faith in Golden Idols triggers a turn in the karmic wheel as near-infinite hubris invites divine retribution.

In case you missed it, here’s a snapshot of the most recent Federal Reserve board meeting:

It’s certainly a peculiar moment in history when the President chides everyone who hasn’t gained 90% in their 409K (sic), seemingly unaware that only the top 5% have enough in a 409K to make a difference.

President Trump and the Federal Reserve agree: the “solution” to inequality and malaise is to boost the 409Ks of the top 5%, leaving the rest of the American workforce as glorified servants of the few who benefit from a record-setting stock market.

Note to the Prez and the Fed: goosing the stock market only increases wealth/income inequality. There’s only so many dogs owned by the top 5% the peasantry can walk, only so many Priuses and Teslas to wash, only so many preciously over-scheduled children to tutor, only so many $50 steak dinners to bus, only so many bedpans of the top 5%’s parents to empty. The top 5% who benefit from the stock market’s relentless melt-up can’t generate a tide that raises all ships; all they can do is further enrich themselves on the debt-serfdom of their servants.

As noted in The Fed Can’t Reverse the Decline of Financialization and Globalization, the Fed can goose stocks to new highs and the President can cheerlead the rise of inequality, but the Fed can’t conjure up wage increases the way it can conjure up $6 trillion to boost Wall Street and the banks: Federal Reserve Admits It Pumped More than $6 Trillion to Wall Street in Recent Six Week Period (via U. Doran).

Then there’s the whole triumphal tone of the Fed’s self-satisfied service of the super-wealthy and the President’s boosterism taunting the bottom 95% who don’t own enough stocks in their 409Ks to reverse their deteriorating financial condition. This reflects an openly quasi-religious faith in the omnipotence of the Fed which we can chart: 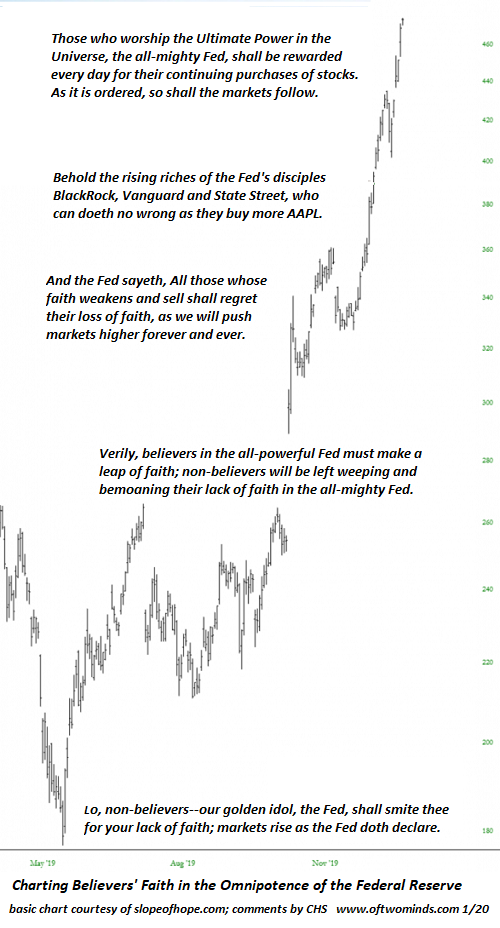 The worship of mortals as demi-gods and faith in Golden Idols triggers a turn in the karmic wheel as near-infinite hubris invites divine retribution. Call it the loss of the Mandate of Heaven for lack of a better term, but those who taunt the unprivileged, worship false idols and rig the system to benefit the few at the expense of the many are in effect claiming to hold the Ultimate Power in the Universe.

For a suitable warning about the consequences of this unlimited hubris, let’s turn to Darth Vader, in paraphrase:

Don’t be too proud of this financial terror youâ€™ve constructed. The ability to control a market is insignificant next to the power of the Force.

Put another way: Those whom the gods would destroy they first make powerful.

(In case you were wondering: the chart is of TSLA, courtesy of www.slopeofhope.com)