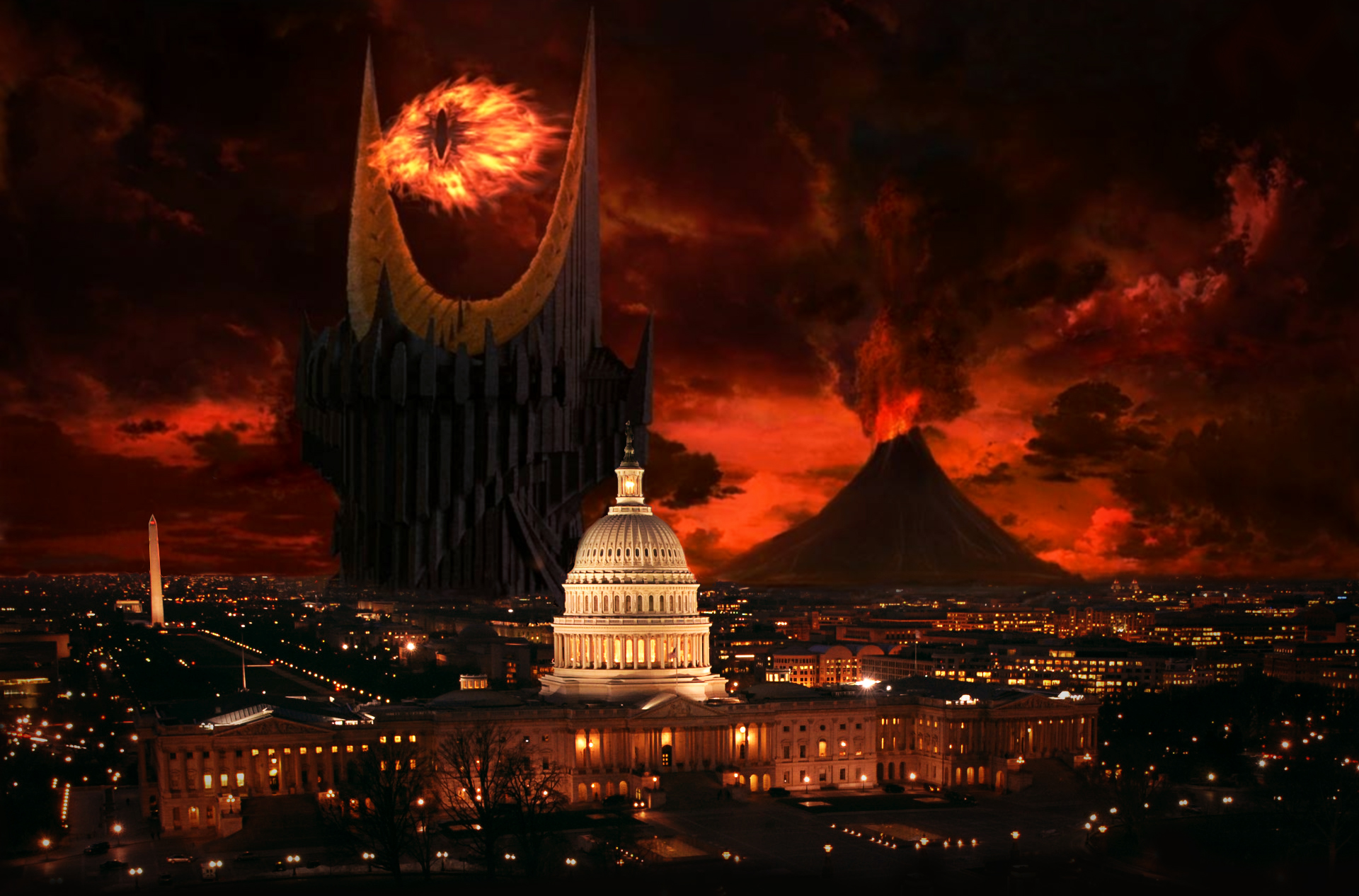 People want examples of work the Intelligence Branch conducts, specifically how it protects itself.  Here is an example before going further tomorrow.

Mark Steyn and Glenn Greenwald discuss the surveillance state weaponized by Barack Obama, and why Julian Assange had to be taken down.

Yes, the history of the U.S. national security apparatus goes back decades; however, the weaponization of that apparatus, the creation of an apex branch of government, the Intelligence Branch, originated under President Barack Obama.

Obama took the foundational tools created by Bill Clinton and George Bush and used the intelligence system architecture to create a weapon for use in his fundamental transformation. An alliance of ideologues within government (intel community) and the private sector (big tech and finance) was assembled, and the largest government weapon was created.  Think about this every time you take your shoes off at an airport.

After the weapon was assembled and tested (Arab Spring), the legislative branch was enjoined under the auspices of a common enemy, Donald J Trump, an outsider who was a risk to every entity in the institutional construct of Washington DC.

Trillions were at stake, and years of affluence and influence were at risk as the unholy alliance was put together.   Again, Steyn and Greenwald discuss the result, but overlook the critical cornerstone that Obama set. WATCH:

To understand the risk that Julian Assange represented to U.S. Intelligence Branch interests, it is important to understand just how extensive the operations of the FBI/CIA were in 2016.

It is within the network of foreign and domestic intel operations where Intelligence Branch political tool, FBI Agent Peter Strzok, was working as a bridge between the CIA and FBI counterintelligence operations. 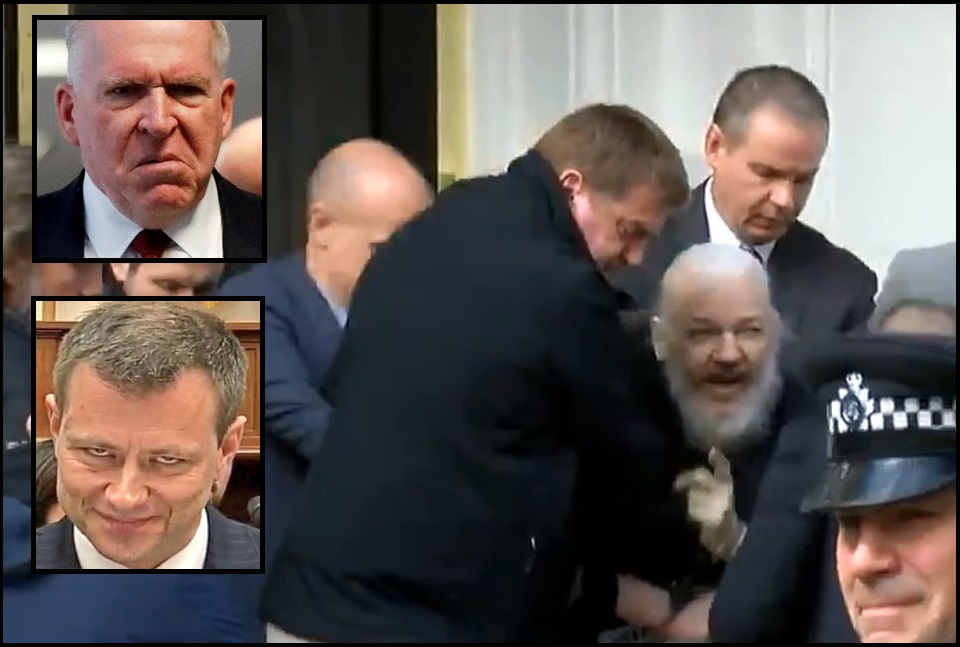 By now, people are familiar with the construct of CIA operations involving Joseph Mifsud, the Maltese professor generally identified as a western intelligence operative who was tasked by the FBI/CIA to run an operation against Trump campaign official George Papadopoulos in both Italy (Rome) and London. {Go Deep}

The initial operations to target Flynn, Papadopoulos and Page were all based overseas. This seemingly makes the CIA exploitation of the assets and the targets much easier.

HPSCI Ranking Member Devin Nunes outlined how very specific exculpatory evidence was known to the FBI and yet withheld from the FISA application used against Carter Page that also mentions George Papadopoulos. The FBI also fabricated information in the FISA.

However, there is an aspect to the domestic U.S. operation that also bears the fingerprints of the international intelligence apparatus; only this time due to the restrictive laws on targets inside the U.S. the CIA aspect is less prominent. This is where FBI Agent Peter Strzok working for both agencies was important.

In short, Peter Strzok acted as a bridge between the CIA and the FBI. The perfect type of FBI career agent for the Intelligence Branch and CIA Director John Brennan to utilize.

Fusion-GPS founder Glenn Simpson hired CIA Open Source analyst Nellie Ohr toward the end of 2015; at appropriately the same time as “FBI Contractors” were identified exploiting the NSA database and extracting information on a specific set of U.S. persons, the 2015 GOP candidates for President.

It was also Fusion-GPS founder Glenn Simpson who was domestically tasked with a Russian lobbyist named Natalia Veselnitskaya. A little reported Russian Deputy Attorney General named Saak Albertovich Karapetyan was working double-agents for the CIA and Kremlin. Karapetyan was directing the foreign operations of Natalia Veselnitskaya, and Glenn Simpson was organizing her inside the U.S.

Glenn Simpson managed Veselnitskaya through the 2016 Trump Tower meeting with Donald Trump Jr. However, once the CIA/Fusion-GPS operation using Veselnitskaya started to unravel with public reporting… back in Russia Deputy AG Karapetyan died in a helicopter crash.

Simultaneously timed in late 2015 through mid 2016, there was a domestic FBI operation using a young Russian named Maria Butina tasked to run up against republican presidential candidates. According to Patrick Byrne, Butina’s private sector handler [NOTE: remember, the public-private sector partnership], it was FBI agent Peter Strzok who was giving Patrick Byrne the instructions on where to send Butina. {Go Deep}

All of this context outlines the extent to which the FBI/CIA was openly involved in constructing a political operation that eventually settled upon anyone in candidate Donald Trump’s orbit.  The international operations of the Intelligence Branch were directed by the FBI/CIA; and the domestic operations were coordinated by Peter Strzok operating with a foot in both agencies. [Strzok gets CIA service coin]

Additionally, Christopher Steele was a British intelligence officer, hired by Fusion-GPS to assemble and launder fraudulent intelligence information within his dossier. And we cannot forget Oleg Deripaska, a Russian oligarch, who was recruited by Asst. FBI Director Andrew McCabe to participate in running an operation against the Trump campaign and create the impression of Russian involvement. However, Deripaska refused to participate.

All of this foreign and domestic engagement was directly controlled by collaborating U.S. intelligence agencies from inside the Intelligence Branch. And all of this coordinated activity was intended to give a specific Russia influence/interference impression.

♦ The key point of all that background context is to see how committed the Intelligence Branch was to the constructed narrative of Russia interfering with the 2016 election. The CIA, FBI, and by extension the DOJ and DOJ-NSD, put a hell of a lot of work into it.

We also know that John Durham looked at the construct of the Intelligence Community Assessment (ICA); and talked to CIA analysts who participated in the construct of the January 2017 report that bolstered the false appearance of Russian interference in the 2016 election. This is important because it ties in to the next part that involves Julian Assange and Wikileaks.

On April 11th, 2019, the Julian Assange indictment was unsealed in the EDVA. From the indictment we discover it was under seal since March 6th, 2018:

On Tuesday April 15th more investigative material was released. Again, note the dates: Grand Jury, *December of 2017* This means FBI investigation prior to….

The FBI investigation took place prior to December 2017, it was coordinated through the Eastern District of Virginia (EDVA) where Dana Boente was U.S. Attorney at the time. The grand jury indictment was sealed from March of 2018 until after Mueller completed his investigation, April 2019.

What was the DOJ waiting for?

Here’s where it gets interesting….

The FBI submission to the Grand Jury in December of 2017 was four months after congressman Dana Rohrabacher talked to Julian Assange in August of 2017: “Assange told a U.S. congressman … he can prove the leaked Democratic Party documents … did not come from Russia.”

(August 2017, The Hill Via John Solomon) Julian Assange told a U.S. congressman on Tuesday he can prove the leaked Democratic Party documents he published during last year’s election did not come from Russia and promised additional helpful information about the leaks in the near future.

Rep. Dana Rohrabacher, a California Republican who is friendly to Russia and chairs an important House subcommittee on Eurasia policy, became the first American congressman to meet with Assange during a three-hour private gathering at the Ecuadorian Embassy in London, where the WikiLeaks founder has been holed up for years.

Rohrabacher recounted his conversation with Assange to The Hill.

“Our three-hour meeting covered a wide array of issues, including the WikiLeaks exposure of the DNC [Democratic National Committee] emails during last year’s presidential election,” Rohrabacher said, “Julian emphatically stated that the Russians were not involved in the hacking or disclosure of those emails.”

Pressed for more detail on the source of the documents, Rohrabacher said he had information to share privately with President Trump. (read more)

Knowing how much effort the Intelligence Branch put into the false Russia collusion-conspiracy narrative, it would make sense for the FBI to take keen interest after this August 2017 meeting between Rohrabacher and Assange, monitor all activity, and why the FBI would quickly gather specific evidence (related to Wikileaks and Bradley Manning) for a grand jury by December 2017.

See also  NOBODY COULD HAVE SEEN THIS COMING: Joe Biden Delivers a Mess of a 60 Minutes Interview, Leaves His Handlers Scrambling.

Within three months of the EDVA grand jury the DOJ generated an indictment and sealed it in March 2018.

The DOJ sat on the indictment while the Mueller/Weissmann probe was ongoing.

As soon as the Mueller/Weissmann probe ended, on April 11th, 2019, a planned and coordinated effort between the U.K. and U.S. was executed; Julian Assange was forcibly arrested and removed from the Ecuadorian embassy in London, and the EDVA indictment was unsealed (link).

As a person who has researched this fiasco; including the ridiculously false 2016 Russian hacking/interference narrative: “17 intelligence agencies”, Joint Analysis Report (JAR) needed for Obama’s anti-Russia narrative in December ’16; and then a month later the ridiculously political Intelligence Community Assessment (ICA) in January ’17; this timing against Assange is too coincidental.

It doesn’t take a deep researcher to see the aligned Deep State motive to control Julian Assange.  The Weissmann/Mueller report was dependent on Russia cybercrimes for justification, and that narrative was contingent on the Russia DNC hack story which Julian Assange disputes.

♦ This is critical. The Weissmann/Mueller report contains claims that Russia hacked the DNC servers as the central element to the Russia interference narrative in the U.S. election. This claim is directly disputed by WikiLeaks and Julian Assange, as outlined during the Dana Rohrabacher interview, and by Julian Assange on-the-record statements.

The predicate for Robert Mueller’s investigation was specifically due to Russian interference in the 2016 election.

The fulcrum for this Russia interference claim is the intelligence community assessment; and the only factual evidence claimed within the ICA is that Russia hacked the DNC servers; a claim only made possible by relying on forensic computer analysis from Crowdstrike, a DNC and FBI contractor.

Julian Assange is the only person with direct knowledge of how Wikileaks gained custody of the DNC emails; and Assange has claimed he has evidence it was not from a hack.

This “Russian hacking” claim was ultimately important to the CIA, FBI, DOJ, ODNI and U.K intelligence apparatus, it forms the corner of their justification. With that level of importance, well, right there is the obvious motive to shut Julian Assange down as soon as intelligence officials knew the Weissmann/Mueller report was going to be public.

…. and that’s exactly what they did. 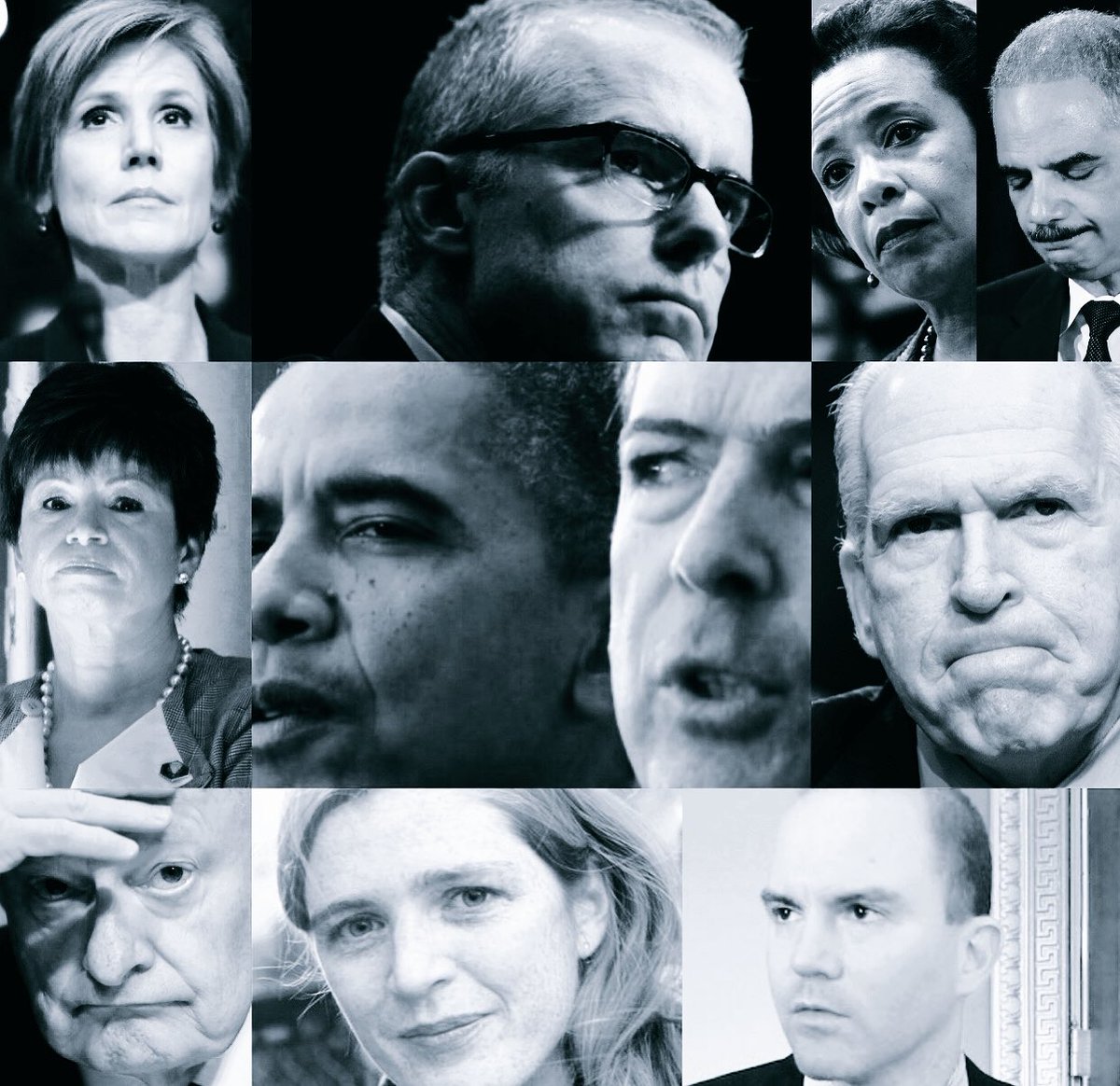