As many of you reading this know, I’m what you would call a Tex-Can. I was born and raised in Canada, but I’ve called Texas home for nearly 30 years. I can’t picture U.S. Global Investors headquartered anywhere else, even after traveling to all parts of the country and, indeed, the world. Texas just “gets it,” which is why I think CNBC recently named the $1.6 trillion economy the best state for business in 2018—the first time, in fact, a state has won four separate times since the network began ranking them 12 years ago.

Below are six reasons why I think Texas trumps all other U.S. economies.

1. Texas is a manufacturing powerhouse

Everything’s bigger in Texas, and that includes manufacturing. Last year, total manufacturing output from the Lone Star State was $226.16 billion, or about 10 percent of total U.S. manufacturing goods, according to the Federal Reserve Bank of Dallas. The industry supports more than 865,000 jobs in Texas, or about 7.1 percent of its workforce. And the average annual compensation for manufacturing was $82,544, compared to $46,642 for all nonfarm jobs, which helps boost the state’s gross domestic product (GDP). Finally, at a time when global manufacturing expansion is slowing, the sector in Texas continues to grow at a healthy pace.

2. Texas is the largest exporting state

Texas is also known as the top exporting state in the nation, responsible for almost 20 percent of total U.S. exports. And they continue to grow at an impressive rate. According to the Dallas Fed, Texas exports rose sharply in July and were up 16 percent year-to-date, or about three times faster than U.S. exports, which increased 5.2 percent for the same period. Much of the growth in the Lone Star State is due to its monster oil and gas industry, which exported more crude than it imported for the first time ever in April, according to an August report by the U.S. Energy Information Administration (EIA). 3. Texans enjoy the fastest income growth in the U.S.

Thanks to a robust business environment, and the fact that it’s one of only four states without a corporate income tax, Texas residents enjoyed the fastest personal income growth this year between the first and second quarter. According to the Bureau of Economic Analysis (BEA), incomes expanded a whopping 6 percent in the June quarter, compared to 4.2 percent for Americans on average. This was the best rate among all 50 states. Earnings increases were led by professional, scientific and technical services. 4. Texas is a global oil superpower

In case you haven’t heard, Texas is oil country—the number one producer in the U.S., accounting for more than 40 percent of national output—and that’s been a blessing for the state’s economy. Employment in oil and gas has led growth among its major sectors. Since Congress removed the crude oil export ban, oil and gas exports have gone from making up 5.2 percent of state exports to the largest share at 18 percent, or $45 billion over the past 12 months, according to the Dallas Fed. Investment bank HSBC now predicts that Texas will surpass OPEC members Iran and Iraq next year to become the world’s number three oil producer, accounting for over half of U.S. production. 5. Everyone wants to move to Texas

Two years ago I wrote a piece about how everyone wants to move to Texas, and since then nothing’s changed. People still want to move here. Can you blame them? Of the top 10 fastest growing cities in terms of population, four were in Texas, according to the Census Bureau. In the number one spot was San Antonio, home to U.S. Global Investors. Between July 2016 and July 2017, the Alamo City attracted more than 24,000 new residents, and it now boasts some 1.5 million people. If we look at the fastest-growing U.S. cities by percent change, Texas takes half of the top 10 spots. In numbers one, two and three are the Texas cities of Frisco (8.2 percent growth), New Braunfels (8 percent) and Pflugerville (6.5 percent). 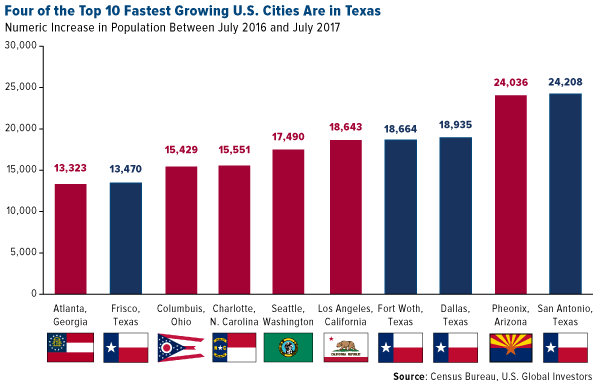 6. Everyone wants a Texas home

More residents means more demand for housing. The Lone Star State mostly avoided the house price bubble a decade ago, according to the Dallas Fed. As such, housing markets are currently tight in most of the state, and median prices remain near record highs. Texas A&M University’s Real Estate Center reports that sales grew 3.8 percent in July, reaching a record level of 29,456 homes sold through a multiple listing service (MLS). What’s more, Texas was the national leader in home permits, accounting for 16 percent of the U.S. total.