The November jobs report was a blowout number, and the U.S. labor market remains strong, but behind the scenes at some of the largest U.S.-based corporations, expectations about the number of job openings and pace of hiring in 2020 have come down. Sixty percent of chief financial officers say a head count reduction will be the most likely staffing trend for their companies over the next 12 months, according to the CNBC Global CFO Council survey for the fourth quarter 2019.

CFOs are not pessimistic on the economy. The Q4 CNBC survey finds a minority — only 15% of U.S. CFOs — think a recession will occur next year. Their fears about U.S. trade policy as the biggest risk to their business have declined (15% cited trade as the biggest external risk this quarter). But there are reasons the biggest employers may be poised to pull back on staffing, according to economic and labor market experts. And there are a few key recent market numbers that support the negative jobs forecast.

While the November nonfarm payroll report showed U.S. companies adding way more jobs than expected across many sectors and the unemployment rate ticked back down to 3.5%, the lowest since 1969, jobs platform Glassdoor pointed to another November key reading from its labor market tracking: the largest employers (5,000 employees+) have cut back on job openings in the year-over-year period through November by 6%.

“Job-openings growth in the last year or so has been slower for large employers,” said Daniel Zhao, senior economist and data scientist at Glassdoor. Zhao said of the 6% decline in November: “It stumbled well below the trend.” 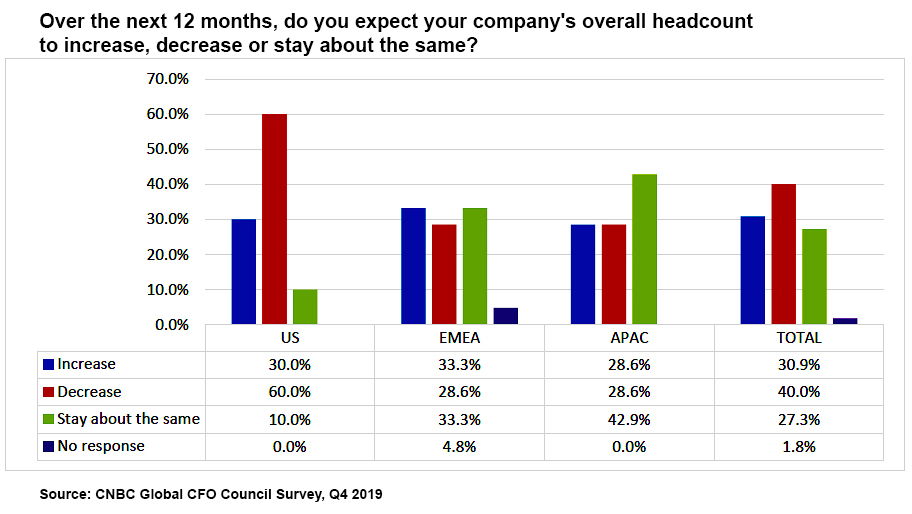