Authored by Olivier Garret via MauldinEconomics.com,
We’ve recently witnessed what I consider to be a turning point for the stock market.
Just when many predicted another growth year for the markets, on Monday, February 5, the Dow plunged by 1,600 points—its greatest point drop in history. 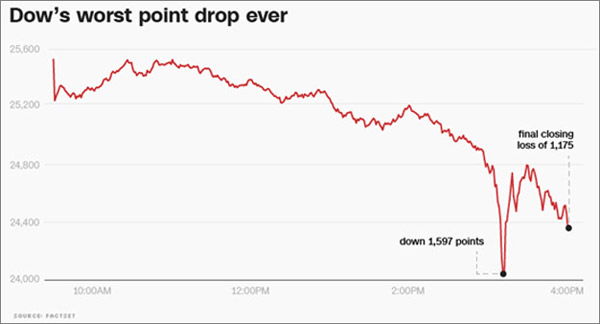 The sudden decline shook investors’ bullishness to the core. Many belatedly remembered that markets do not always go up and that even the “New Economy” isn’t indestructible.
I have no doubt that the stock market bulls will find excellent excuses for this correction. Fundamentals are still strong for the economy and the markets. Maybe February 5 was just a fluke, and we can move confidently into the future!
I happen to think otherwise. I believe that what we experienced was only the foreshock before the “Big One” hits… and history is on my side.

The vast majority of corrections and crashes follow initial warning signals.
Very often, market tops are followed by a few setbacks, followed by new highs, until the ultimate correction occurs.
The 2000 dot-com collapse is a perfect example. 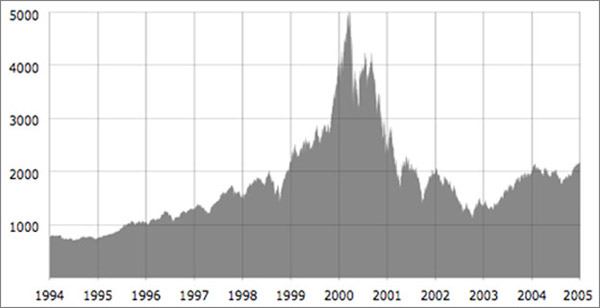 The initial correction started on March 11, 2000, but the index didn’t bottom until October 2002 after losing 78% of its pre-crash value.
Similarly, the Financial Crisis of 2008 and the collapse of Lehman Brothers were preceded by the 90% share price drop and subsequent bankruptcy of New Century Financial in March and April of 2007.

The market actually peaked on October 9, 2007—a full six months after the initial shock. Then another five months later, Bear Stearns crumbled, followed by IndyMac in July 2008.
Bubbles rarely blow all at once.

The Question You Should Ask Yourself

The question investors should ask themselves is: Which part of the cycle are we in today? Are we closer to a top or to a bottom?
If we are closer to a top and we start seeing early signs of a correction, it’s important to adopt a defensive investment strategy before a more serious crash occurs.
The market may still reach new highs, but the risks are mounting. Personally, I’d rather sacrifice a bit of performance to protect the downside.
The reasons why we want downturn insurance in place now are:

There are some positive indicators that could prolong the current expansion—such as high employment rates and robust economic activity in all the developed economies.
The Trump administration’s tax reform could also boost the economy, although most of the benefits are likely to be delayed.
As far as I am concerned, starting in 2017, I have started adjusting my portfolio to get ready for a sizeable correction. I haven’t sold all my stocks and bonds, of course, but I have rebalanced the asset allocation considerably.
For example, I’ve sold overvalued positions and added a lot of cash to redeploy once the correction hits. And I have purchased a significant amount of gold during the last 12 months—both as insurance and because it is a non-correlated asset class that also happens to be quite inexpensive right now. In fact, the current gold price is a good entry point.
If you don’t know where to start, first learn the difference of gold ETFs vs. physical gold and how to open a gold IRA, which is one of the best ways to buy gold.
Then you’ll have to decide on what type of gold you want to purchase. I recommend sovereign coins such as Gold American Eagles, Canadian Maple Leafs or Gold Buffalos, which are some of the most liquid coins in the market.
In addition, I have made a few long-term leveraged bets on a market correction.
I recommend you do the same.