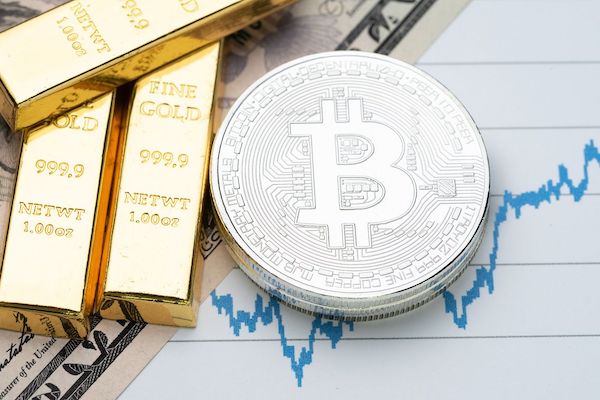 International Man: For over 2,500 years, gold has been mankind’s most enduring money.

With the emergence of Bitcoin—which has piqued the interest of many—there is a new hard money option.

How do you see the two as governments worldwide are engaged in the most extreme money printing experiment in history?

Nick Giambruno: Let me first say that I am all for free-market competition in money. I say let the best money win.

To really understand what is going on here, it’s imperative to have a handle on the basics.

Money is a good, just like any other in an economy. And it isn’t a complex notion to grasp.

It doesn’t require you to understand convoluted math formulas and complicated theories—as the gatekeepers in academia, media, and government mislead a lot of folks into believing.

Understanding money is intuitive and straightforward. Money is simply something useful for storing and exchanging value. That’s it.

The way I see it, three primary monetary goods are competing against each other today: Bitcoin, gold, and fiat currency.

Fiat currency is currently the dominant form of money in the world. But that status is rapidly fleeting as central banks are inflating their currencies at unprecedented and exponential rates.

That’s why many millions—soon billions—of people are turning to sound monetary alternatives like gold and Bitcoin.

Fiat currency is a fraud of historic proportions that causes incomprehensible damage. So I am rooting for both gold and Bitcoin.

International Man: Many proponents of gold have taken aim at Bitcoin and have called it a speculative bubble. Can you explain Bitcoin’s monetary qualities?

Nick Giambruno: Sure, but first let me say that I’d encourage the Bitcoin people and the gold people to have a temporary truce. It’s far wiser not to divide the people who want sound money and instead focus on defeating the bigger problem today, which is the government’s monopoly power over money, fiat currency, and central banking.

The sound money people are already a tiny fraction of the population, a rounding error, really. If they are divided and fighting among themselves, it will be far easier for the government to “tag and bag” them and prevail over both gold and Bitcoin.

So I suggest they team up and take on the bigger problem—and then fight it out later. It’s the basic strategy in any three-way competition where the two weaker sides team up to take on the more powerful side.

Now, back to Bitcoin’s monetary properties.

“Hardness” does not mean something that is necessarily tangible or physically hard, like metal. It means “hard to produce.” By contrast, “easy money” is easy to produce. The best way to think of hardness is “resistance to inflation,” which helps make it a good store of value—an essential function of money.

Like gold, Bitcoin does not have counterparty risk. Bitcoin and gold are the only primarily monetary assets that aren’t simultaneously someone else’s liabilities.

A lot more can be said on this topic, but this sums up the essential points.

It’s also important to clarify that none of the other 4,000 or so other cryptocurrencies are genuinely scarce like Bitcoin. They all have key players, insiders, and development teams that can act like central banks and inflate the supply if they choose to. In short, all other cryptos have artificial scarcity. Bitcoin has real scarcity.

With Bitcoin, the current and future supply is finite and known to all. There will never be more than 21 million Bitcoins, and there is nothing anyone can do to change that.

In short, Bitcoin is the only crypto in the same league as gold.

See also  Explain to me again how the Ukraine proxy war is a battle for democracy....

International Man: What do you say to critics who claim that Bitcoin is just a bunch of digits on a computer with no intrinsic value?

Nick Giambruno: One of the first—and most important—lessons that free-market Austrian economics teaches is that all value is subjective.

There is no such thing as inherent or intrinsic value.

Something only has value because individuals subjectively determine it does.

For example, when people didn’t understand what crude oil was, they’d find it in their backyards and think it was waste. They’d pay to have it removed from their property.

Later, once people understood the economic potential of crude oil, it was transformed from unwanted waste into “black gold.”

The oil didn’t change; it was still the same oil. What changed was how people valued it.

Marxists differ in that they falsely believe that labor has inherent or intrinsic value.

But this ridiculous notion is easily debunked.

The great economist Murray Rothbard explains this by asking people to try to make and sell mud pies—not the chocolate desserts, but pies literally made of dirt.

According to the Marxists, the pies have objective and intrinsic value because of the labor someone put into making them. But good luck getting someone to pay for them voluntarily.

The concept that all value is subjective applies to all goods, including monetary goods like gold and Bitcoin.

International Man: The Bitcoin price has reached breathtaking levels. It has also garnered the attention of institutional investors and corporations. Where do you see it going?

Nick Giambruno: What we have with Bitcoin is an entirely new asset that millions of people all around the world are adopting as money because of its superior monetary properties.

The monetization of the new monetary good is genuinely unlike anything anyone alive has ever seen before.

It took gold centuries to achieve monetization. Bitcoin has a good chance of undergoing monetization in a much shorter period.

The market cap for Bitcoin today is around $1.1 trillion, up over 8x in the last year alone.

The market cap for all the mined gold in the world, which took thousands of years to accumulate, is about $11 trillion.

That means Bitcoin has a market cap roughly equal to 10% of gold’s and is already well on its way to monetization.

Assuming gold stays flat and Bitcoin goes up 10x, it would then have a market cap roughly equal to gold. At that point, a single Bitcoin would be worth over $500,000. That is a real possibility. Bitcoin has gone up 10x several times in the past, and it can do it again, especially as corporations and institutional investors start buying Bitcoin for the first time.

Bitcoin is not an established money but an emerging one. It’s growing rapidly but doesn’t have the reliable history that gold does. I like to think of Bitcoin like hard money with a call option attached to it.

International Man: What about Bitcoin’s political risks? Can governments stop it?

Nick Giambruno: Bitcoin threatens a major source of the government’s power—the power to create money out of thin air and force everyone to use it. There’s no question they’ll try to protect this racket from Bitcoin. The question is whether they’ll be successful.

Remember, the Chinese government has banned bitcoin several times with little to no long-term effects.

That’s because it’s entirely impractical for governments to ban Bitcoin. They’re no match for the economic incentives that attract millions—soon billions—of people, and increasingly, corporations, to a harder and superior form of money. Further, all aspects of Bitcoin are genuinely decentralized and robust. The best that governments can do is play an endless game of global whack-a-mole.

Governments in Argentina and Venezuela have laws restricting their citizens from accessing US dollars. However, these laws have little effect on their citizens’ desire and ability to use them. These actions just create a thriving black market, or, more accurately termed, a free market.

Similarly, governments have tried to ban cannabis for decades, which hasn’t worked out very well for them.

Bitcoin would be infinitely more challenging for governments to ban than US dollars or a plant.

I would like to see governments try to ban Bitcoin. They’ll fall flat on their faces. This will reinforce the value proposition of Bitcoin as a superior form of money that nobody controls.

For example, the government of Nigeria recently banned Bitcoin. It’s an interesting case because the ban caused the Bitcoin price to increase, not decrease. After the ban, Bitcoins started selling at up to a 60% premium.

As we clearly saw with the war on (some) Drugs, government prohibitions caused prices of otherwise cheap plants, like cannabis, to rise far higher than they would otherwise in a free market. The same dynamic would be at work with Bitcoin. As counterintuitive as it may seem at first, government bans would be bullish for the price.

I’d also add that it’s a terrible, totalitarian notion to think that governments would throw peaceful people in cages for voluntarily exchanging value with Bitcoin. If your government goes down this path, I’d recommend immediately leaving the country as it would portend much worse things to come.

International Man: Is it too late for people to get involved or own some Bitcoin?

Nick Giambruno: Absolutely not. As I described above, Bitcoin has a real chance of reaching parity with gold’s market cap. That would imply a 10x move from current prices.

But it’s not just Bitcoin’s upside that makes it appealing. It’s the fact that nobody can inflate the supply, which makes it attractive as a store of value and a savings vehicle even if the price doesn’t go up. In a world of government-imposed taxes on savings—otherwise known as negative interest rates—just keeping what you have is a challenge. Fortunately, with Bitcoin, you can put your savings into something that nobody can dilute or inflate.

It’s also important to clarify that you don’t need to buy an entire Bitcoin. You can own tiny fractions of up to 1/100,000,000 of a Bitcoin. These are “satoshis”, and they are the smallest unit of a Bitcoin.

In other words, if you have one penny, you can get 17 satoshis.