There is no doubt that emotions and behavioral factors play a big part in defining good traders. Stress, mood and other psychological factors we discussed in earlier artcles play a significant role in how most traders execute their trading.

Traders who enjoy stable emotions make good traders in general.  A research done by The University of Birzeit, School of business and economics reinforces the fact that psychology plays a crucial part in trading. The study was meant to show the effects of stress, mood and stable emotions on our trading.

The research was done in 2016, where CFD trading participants were picked randomly from 40 countries around the world. Questionnaires were then issued to the traders to establish their emotions and stress index. Most studies have been studying trading psychology and stock trading; this study laid more emphasis to psychological factors in forex trading. The study sample was 100 experienced forex traders around the world. Most traders captured in the samples were from the US and Europe in general. The results obtained were then analyzed using Statistical Package for the Social Science (SPSS). Microsoft Excel was used to calculate both the stress and emotional indices. The results were as follows:

The results showed that traders with fewer emotions made more rational decisions than their counterparts who were emotional. Where trading emotions stability index (TESI) was 0 (TESI=0) greed was equal to fear therefore traders put rational take profits and stop losses. 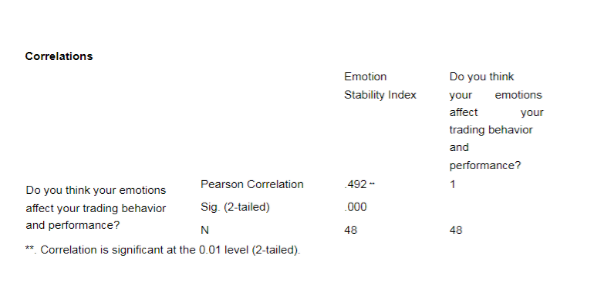 In the study, the participants were asked if they knew moods affected their trading. The more a participant realized the role of emotions in his trading, then the more he was more confident thereby showing signs of emotional stability.

Return on investment vs stress

There was a significant negative correlation between Trading Stress Index (TSI) and the returns. Traders with less stress have a higher return on investments as compared to those with high-stress levels.

The structured environment, how we were trained to think

I am not against formal learning in any way; in fact, I support it wholeheartedly. It has given us the entire basis to do what we are doing in our different capacities. Over the years, I have been analyzing successful traders around me. One interesting thing I have noted about them is that they were not very good in school, in fact, some are college dropouts.

Trading does not require you to be the smartest person to succeed. However, our education system has systematically trained us to be perfectionists. We have been taught that there is one way of doing things, “the right way.” Our system does not require of us to think outside the box. If you are to be a successful trader you need discipline, determination and an unrelenting self-drive to achieve.