Many analysts doubt a n0-deal Brexit is likely. They think some last-minute agreement will emerge.

In theory, a “hard” Brexit is in no one’s interest. It makes no sense, the logic goes. So it won’t happen.

The problem is that politicians may have entirely different interests. And they happen to miscalculate.

If governments were always sensible, we would never have wars. Yet we do, because politicians are capable of making terrible mistakes.

Here’s a handy map my friend and renowned geopolitical expert George Friedman shared in his 2019 forecast: 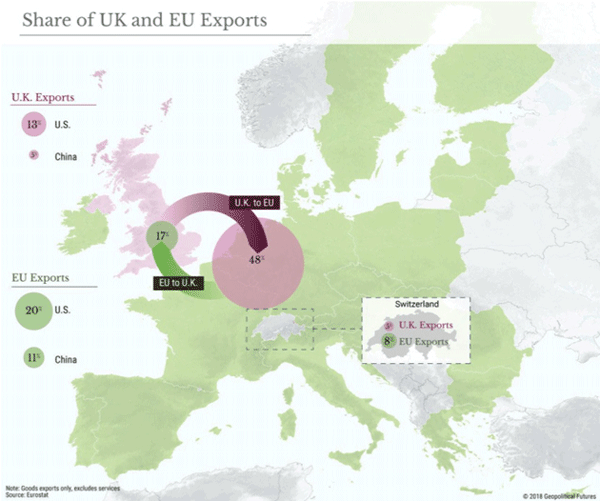 Some 48% of UK exports go to the EU. It’s far more than it sells to the US. That means increasing trade with the US won’t help—even if we sign a new free trade agreement.

The EU is less dependent on the UK. Some regions and companies will get hit hard, though.

George is among those who think a deal will get done in the next few weeks. That doesn’t mean he is especially optimistic. From his forecast:

The United Kingdom maintains a close security relationship with several European states. It’s also an important trade partner for major EU economies such as Germany and the Netherlands. Deal or no deal, those relationships will continue, and the UK will be an important ally for EU states on the periphery seeking to balance against Germany and France.

Its future is a different story. Much will depend on the deal, but the same forces that compelled the United Kingdom to leave the bloc threaten its unity, too. If a Brexit deal ends up disproportionately hurting Scotland, for example, it could create renewed calls for Scottish independence. Northern Ireland is also in an unstable position. The sectarian issues that led to the Troubles are still simmering, the peace held together by the 1998 Good Friday Agreement is fragile, and the economy is under significant pressure.

A new EY study says financial firms are moving $1 trillion in assets out of Britain to the EU. Many are moving staff as well.

US/UK trade exposure is small for both countries. Yet some of it is important and irreplaceable.

Whatever hurts the UK will hurt the US, too. A Brexit-sparked recession will hinder trade. It will force some US companies to find other partners and aggravate our own problems.

But the bigger problem is that the US will get hit on both sides.

A hard Brexit will hit both the EU and UK economies, including China. And the damage from both will then spread worldwide, including the US.