Here is a map that shows the countries surrounding Iran in green that will not permit the US to launch a war with Iran from: 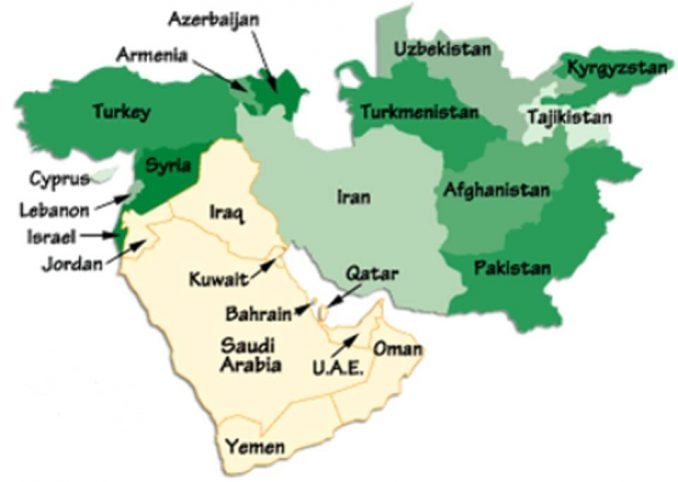 With Turkey defecting from the US alliance the huge NATO base at Incirlic is useless for an Iran war.

Several of America’s staunchest allies are sleeping with the enemy.

Countries which have borders with Iran including Turkey and Pakistan have military cooperation agreements with Iran. While this in itself excludes the possibility of a ground war, it also affects the planning of US and allied naval and air operations.

Until recently both Turkey (NATO heavyweight) and Pakistan were among America’s faithful allies, hosting US military bases.

From a broader military standpoint, Turkey is actively cooperating with both Iran and Russia. Moreover, Ankara will be acquiring in 2020 Russia’s state of the art S-400 air defense system while de facto opting out from the integrated US-NATO-Israel air defense system.

Needless to say the North Atlantic Treaty Organization is in crisis. Turkey’s exit from NATO is almost de facto. America can no longer rely on its staunchest allies. Moreover, US and Turkish supported militia are fighting one another in Syria.

Iraq has also indicated that it will not cooperate with the US in the case of a ground war against Iran.

Under present conditions, none of Iran’s neighboring states including Turkey, Pakistan, Afghanistan, Iraq, Turkmenistan, Azerbaijan, and Armenia would allow US-Allied ground forces to transit through their territory.

In recent developments, Azerbaijan which in the wake of the Cold War became a US ally as well as a member of NATO’s partnership for peace has changed sides. The earlier US-Azeri military cooperation agreements are virtually defunct including the post-Soviet GUAM military alliance (Georgia, Ukraine, Azerbaijan and Moldova).

Bilateral military and intelligence agreements between Iran and Azerbaijan were signed in December 2018. In turn, Iran collaborates extensively with Turkmenistan. With regard to Afghanistan, the internal situation with the Taliban controlling a large part of Afghan territory, would not favor a large scale deployment of US and allied ground forces on the Iran-Afghan border.

Visibly, the policy of strategic encirclement against Iran formulated in the wake of the Iraq war (2003) is no longer functional. Iran has friendly relations with neighbouring countries, which previously were within the US sphere of influence.

Under these conditions, a major conventional theater war by the US involving the deployment of ground forces would be suicide.

Since the May 2017 split of the Gulf Cooperation Council (GCC) Qatar has become a staunch ally of both Iran and Turkey (which is also an ally of Iran). While they have no “official” military cooperation agreement with Iran, they share in joint ownership with Iran the largest Worldwide maritime gas fields (see map below).

The split of the GCC has led to a shift in military alliances: In May 2017 Saudi Arabia blocked Qatar’s only land border. In turn Saudi Arabia as well as the UAE have blocked air transportation as well as commercial maritime shipments to Doha.

What is unfolding since May 2017 is a shift in Qatar’s trade routes with the establishment of bilateral agreements with Iran, Turkey as well as Pakistan. In this regard, Russia, Iran, and Qatar provide over half of the world’s known gas reserves.

The Gulf of Oman

With the 2017 split up of the Gulf Cooperation Council (GCC), Oman appears to be aligned with Iran. Under these circumstances, the transit of US war ships to the headquarters of the US Fifth fleet in Bahrain not to mention the conduct of naval operations in the Persian Gulf are potentially in jeopardy.

The Fifth Fleet is under the command of US Naval Forces Central Command (NAVCENT). (NAVCENT’s area of responsibility consists of the Red Sea, the Gulf of Oman, the Persian Gulf and the Arabian Sea).

With the split up of the GCC, Oman is now aligned with Iran. Under these circumstances, the transit of US war ships to the headquarters of the US Fifth fleet in Bahrain not to mention the conduct of naval operations in the Persian Gulf would potentially be in jeopardy.

The strait of Hormuz which constitutes the entry point to the Persian Gulf from the Gulf of Oman is controlled by Iran and the Sultanate of Oman (see map, Oman territory at the tip of the Strait). 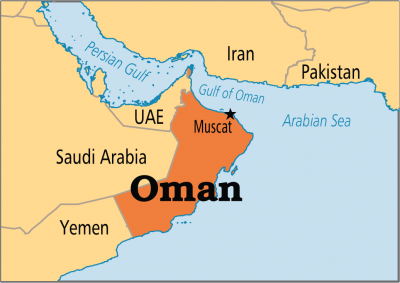 The width of the strait at one point is of the order of 39 km. All major vessels must transit through Iran and/or Oman territorial waters, under so-called customary transit passage provisions of the United Nations Convention on the Law of the Sea.

More generally, the structure of alliances is in jeopardy. The US cannot reasonably wage a full-fledged conventional theatre war on Iran without the support of its longstanding allies which are now “sleeping with the enemy”.

In the short space of a couple of years the entire Middle East is lost to the US hegemony. The defection of all the major countries with the exception of Saudi Arabia, UAE and Israel effectively cedes the Middle East to Russia and China. Brezinski addmited as much before he died. It is ironic that the Bush/neocon doctrine of the New American Century failed utterly, after $10 trillion in failed wars Eurasia deserts the West and embraces Russia and China. It is also sad to think this failed policy led to the attacks of 911 that the neocons thought would lead them to taking over the Middle East.