TLDR this shit is about to escalate. Buy puts.

I’ve seen too f*cking much speculation lately on just how bad this COVID-19 shit is. Some say its the sniffles. Other say its the start to World War Z. More specifically I’ve seen this referenced as the next big “Black Swan” event because this sub is a bunch of f*cking amateurs (myself included) and they just regurgitate whatever bullshit movie or book they read and used to self-proclaim themselves the next Michael Burry (see what I just did there? I’m speaking your language).

I’ve read my fair share of shit too assholes. The Big Short, Liars Poker, Flash Boys, Chaos Monkeys, Zero To One, the new /r/WallStreetBets book (which doesn’t come in a hardcover and looks like a disgrace in my library). What I have come to realize is there is no science to stocks. [Yes there is, you claim. Stonks only go up. Science duh].

However there is science to a virus works and how a pandemic spreads. So I’ve thrown together some half-assed research that you can disregard at your pleasure. This includes charts that we are all so fond of reading. Full disclosure, I am not a biologist, doctor, or any expert in the field of virology. I just did some internet readings and used that data to apply my own logic. Undoubtedly there are errors in what lies ahead. Let’s begin.

COVID-19 Coronavirus is caused by SARS-CoV-2, a incestuous relative of our old friend SARS (we’ll get to him shorty). Depending on what you believe this has been caused by some starving Chinese peasants seasoning their soup with bats or the result of a Chinese bioweapon escaping its lab. Long story short its the flu that really f*cks you up.

This isn’t the first virus we’ve seen rapidly rise to fame. We’ve got a few historical examples we can look to for comparison.

The big bad granddaddy of them all, this is the shit doomsdayers point to when they want to really incite some fear. Firs appearing in January of 1918, this f*cker infected almost 500 million and killed anywhere between 40 million to 100 million. ~28% of the United States was infected with a 2%-3% case-fatality ratio.

A bad nickname since most of these could be called Asian Flu. This gets the crown since it was first. Originating in our dear friend China, this spread to Singapore by February of 1957, Hong Kong by April, and the US by June. 69800 deaths in the US with 1-4 million worldwide (WHO estimates 2 million).

Probably the last real panic over an Asian virus, this was declared in November 27th of 2002. There apparently still is no cure. That said, only 8098 cases with 774 deaths occurred (however that is a fatality rate of 9.6%). There were only 27 US cases.

What looked to be the sequel to SARS but really was just a lame prequel, this had a case-fatality of 0.01%-0.08%. WHO statistics as of July 2010 attributed 18000 deaths to the virus, but later revisions estimate somewhere around 284,500 deaths.

Unfortunately we don’t have a ton of good data on how any of these affected markets. For starters, the stock market today is quite different from 20 years ago, and the global economy is much more entangled. News travels faster, and we have a way of sensationalizing everything. We can look at the markets during each of the aforementioned virus’ (minus the 1918 Spanish Flu. If this happens there won’t be a stock market).

The most recent two virus’, H1N1/09 and SARS, both have unusable market data. Why? Because when both virus’ struck, we had just popped two of the largest bubbles in history. H1N1/09 struck in March of 2009, right in the midst of the Great Recession. The market had already bottomed, the Feds were writing blank checks, and the economy was already in triage. SARS came to fruition in November of 2002, one month after the NASDAQ hit bottom from the DotCom bubble. What impact these virus’ had on the world market is tainted by the preexisting financial landslides.

I feel however, that the 1968 Hong Kong Flu is our best comparison to COVID-19 and any impact the virus could have on the overall market. Just look at these numbers.

H3N2 struck a year before the Recession of 1969-1970, a recession that ended the third longest period of economic expansion in US History. According to Wikipedia:

“At the end of the expansion inflation was rising, possibly a result of increased deficit spending during a period of full employment. This relatively mild recession coincided with an attempt to start closing the budget deficits of the Vietnam War (fiscal tightening) and the Federal Reserve raising interest rates (monetary tightening).[2] During this relatively mild recession, the Gross Domestic Product of the United States fell 0.6 percent. Though the recession ended in November 1970, the unemployment rate did not peak until the next month. In December 1970, the rate reached its height for the cycle of 6.1 percent.”

However I would once again argue this is a poor example, as the market didn’t seem to rock much during the actual outbreak, and some of the surrounding factors of the recession were different than those of today.

So what does this mean? In my opinion we are facing a somewhat unknown scenario. Markets don’t like unknowns. And there is a lot of fear being tossed around regarding this virus. Markets don’t like fear either. So is this unknown fear worth panicking about?

Let’s look a pair of charts. Some really unhappy charts.

This first one graphs all the cases of COVID-19 since its inception on December 31st, 2019, the day China contacted WHO and let them know shit was about to get f*cked. 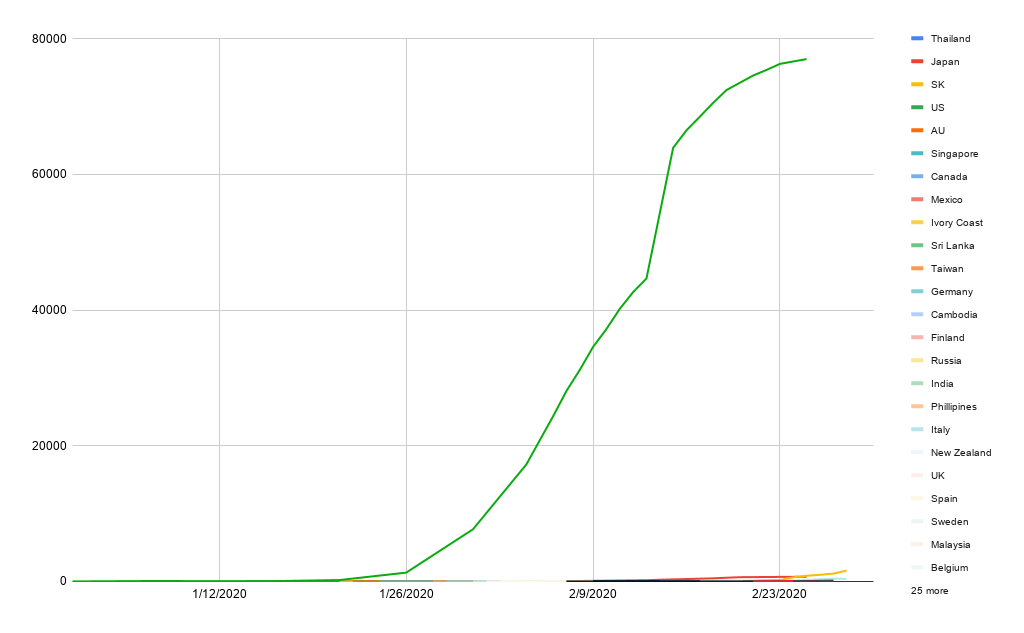 For the first month of that chart, you don’t really see much. Then you see one really big line go parabolic in a hurry, and more recently a bunch of little tiny lines that don’t seem to be doing anything. That first line is the number of total COVID-19 cases, dominated by primarily China (>95%). China has had a runaway explosion of cases that *tentatively* seems to be slowing down. Already the panic from this has caused our recent markets to approach/enter correction territory in the matter of a week.

Now lets go zoom in on those tiny lines: 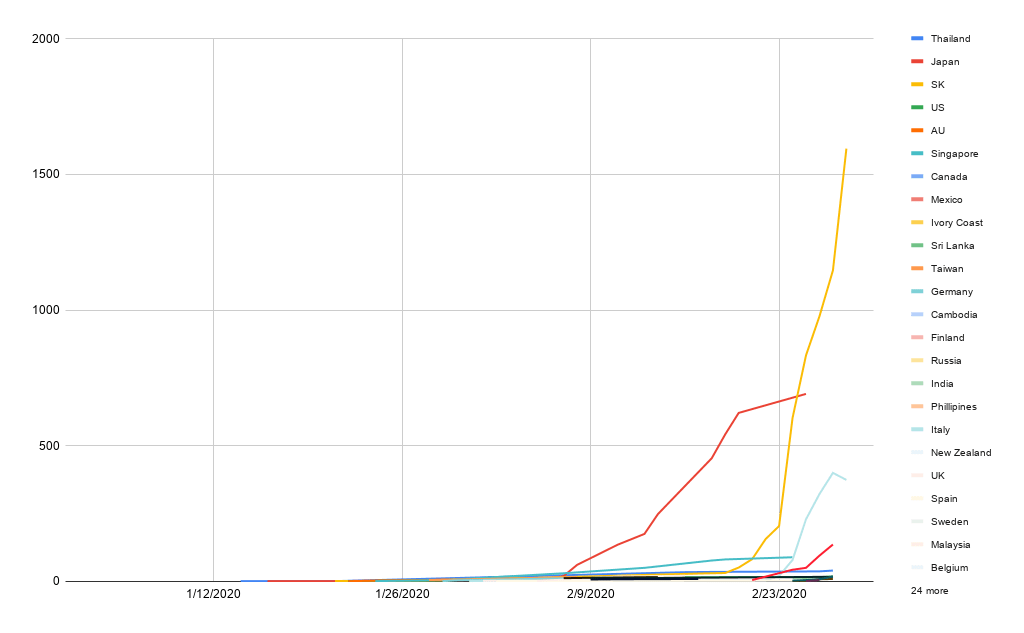 Holy shit, they are going parabolic too. After a rough incubation period of about a month, we start seeing an explosion of cases in infected countries. South Korea has especially been taking it through the teeth. These are exponential jumps. If these were stocks, they’d be memed to death already. If you were investing in virus outbreaks in countries, you can bet your ass most of this sub would be buying calls on every one of these nations with new cases.

So lets see, we have an economy that is nonsensical, in a trade war with a nation who is ground zero for a sweeping health crisis. We have recession indicators blowing up everywhere, Twitch streamers jumping into stocks, markets getting spooked to death over this virus, global supply chains being interrupted, the Feds pumping the markets desperately, and now this virus has decided to start going apeshit?

WHO declared this an international health emergency on January 22nd. WHO has YET to declare this a pandemic. We overtook the SARS death toll on February 9th, three weeks ago. People went nuts about SARS. According to Wikipedia in regards to Swine Flu, “Critics claimed the WHO had exaggerated the danger, spreading “fear and confusion” rather than “immediate information”. The WHO began an investigation to determine whether it had “frightened people unnecessarily”‘. So if WHO took flak for overselling Swine Flu in 2009, I would wager they are underselling COVID-19 now.

Did you watch that speech last night people? What about any of this is inspiring confidence? I don’t want to imagine what the presser would be if the number of US cases went parabolic. Hell it might already have done so. This wouldn’t be the first time the current administration has fudged numbers.

In just the last week:

Iran and Italy have gone parabolic. South Korea looks like its gonna hit China numbers from a month ago soon.

We have outpaced almost every historical example of a major pandemic BESIDES the 1918 Spanish Flu. Also this virus is matching the %2-%3 case-fatality ratio.

I’m buying puts out the ass across the next two months. Could this thing fizzle out and blow over in two months? Yes of course. Could this entire post be full of shit and age incredibly poorly by next week? Absolutely. But this sub isn’t about investing its about white collar gambling. You have to take the odds when they are in your favor. An overextended market gets hit by an unprecedented external force? The odds have titled. It’s time to lay down some fat bets while it exists. Or keep throwing money stupidly at meme stocks and hoping SPCE moves 2 points.

Edit 2: In the mere hours since I posted this gibberish, Kuwait, Switzerland, Iran, the UK, South Korea, Iraq, Finland, and Lebanon have reported more cases and deaths. Australia says pandemic inevitable, the US has its first case of unknown origin who wasn’t tested for days, and Saudis Arabia just cancelled the pilgrimage to Mecca and Medina. After a few hours sleep I feel even more confident in this assessment.