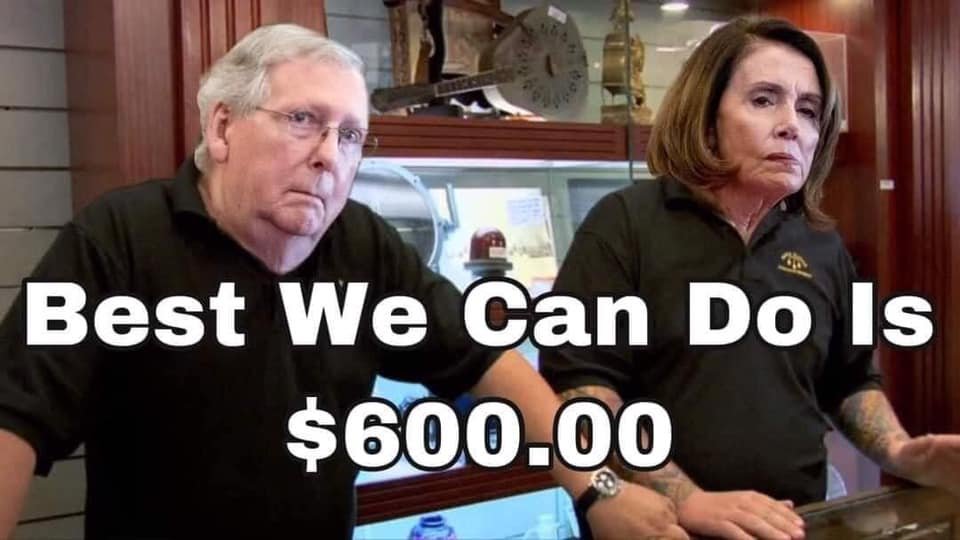 So, we have this interesting so-called Covid bill, a 5000 page document, longer than War and Peace by Lev Tolstoi, which took months and armies of lobbyists to put together, yet the members of Congress had something like 24 hours to read it, that provided they give a shit anyway. Which they don’t.

The Covid bill contains a ton of pet projects like transgender aid for Pakistan and all sorts of retarded stuff, such as aid for people who own race horses. Speaking of the ruling class slapping the peasants in the face, Americans who make less than $75k a year got a cool $600 check, that provided they qualify for getting some money back from the same government that closed their businesses.

There are also good things in the bill, like $300 per week in enhanced unemployment benefits, and would extend unemployment to fifty weeks (almost a year) for both state and federal programs, compared to the regular 26 weeks, not to mention $325 billion allotted to help small businesses.

For a comprehensive review of the pork-barrel spending included in the Stimulus Package, I would recommend you to take a look here. Basically, the bill authorizes direct payments  at a cost of $166 billion ($600 for each adult and $600 for each dependent, instead of $1,200 and $500, respectively, in the first round of stimulus), jobless aid ($300-a-week federal unemployment subsidy), 25 billion in rental assistance, and extends until the end of January 2021 a federal eviction prohibition, 10 billion in child care, 82 billion for public and private K12 schools and colleges, 22.4 billion for testing/tracing the plague, 20 billion for vaccines, and then tons of money for supporting big corporations, banks, airlines, USPS, what have you.

That was to be expected actually, and let’s not forget billions to foreign nations, including an extra 500 million to Israel, a prosperous first world country, or 700 million to Sudan so they normalize relations with Israel. Again, nothing to see here, business as usual.

Imagine… the day is April 15, 2021, Tax Day. Americans who have lost their jobs or businesses because of forced government shut downs, among many other tax paying citizens, are sick and tired of the way their government is spending their hard-earned tax dollars on other countries and irrelevant special interest groups.

Come end of day, citizens who have religiously paid their fair share their entire life suddenly stop the gravy train.  The government can’t even fund itself, let alone come after you because they can’t pay to keep anyone around to do it, and are forced to listen to the demands of the people and… logically work it out!!!

This will obviously never happen, but unfortunately that is the only way that we the people can send a direct message to our elected officials that we have had enough of this shoddy leadership.

The economic message of the pandemic is that you should work for either (1) a large organization, such as an airline, bank, etc., because your employer is protected by the government or (2) a public sector job, which is the modern version of utopia – good pay, no stress, great benefits, impossible to lose your job. On the other hand, if you work for a small business, your job is at tremendous risk. And if you own a small business, lol, might be better off at the roulette table.

Now if you ask me, the end goal is to bankrupt the US and destroy the middle class.  Thus, how they are adding trillions to the debt is immaterial.  Just know that the debt will be used as an excuse to usher in austerity and eliminate OASDI and Medicare.

Nine months after beginning the process of shutting down your business, taking your job from you – they’re giggling, giving you $600. Israel was given $38 billion this year alone. Their population is 9 million. That’s over $4000 each, not to mention what they get from NGOs (Christian Evangelicals) each and every year.

Ever wonder why the ‘brews own everything? Because we give billions of dollars to Israel which they funnel back to their agents in the USA. They use that cash to buy businesses, property, and politicians. Then those politicians vote for more cash to be sent again.

And again, this sure sounds like The Great Reset on steroids.  Covid-19 is a planned operation and started a long time ago. The Hildabeast was supposed to win and usher in The Great Reset. Trump won and threw a wrench in the plan. Covid released under Hillary would have been the total nationwide lockdown, forced containment camps, and the full transformation. The 2020 elections would have been cancelled and martial law would have been declared.

That is why Trump was never going to win 2020. He wasn’t going to push the plan back again.

Now, excuse my economic ignorance, but can someone please explain how this can continue without debasing the currency to the state of worthlessness? I get that the USD is in worldwide demand as the reserve currency, so does that somehow ensure this financial recklessness can continue for years/decades?

If so, then why the guise of limited printing/debt creation? Why not bail out every big and small business in need and provide adequate liquidity for every citizen? 30T is no different than 300T national debt…neither will ever be reconciled. What triggers “the jig is up”? and when and how does this end???? Inquiring minds want to know. Any gifted prognosticators out there?