I originally wrote this as a comment on Reddit to counter some extreme and completely false Neocon Globalist propaganda published in this article by the anti democracy Neocon Fascist Daily Beast:

On the Eve of the NATO Summit, Trump Has Pissed Away the Pax Americana
www.thedailybeast.com/on-the-eve-of-the-nato-summit-trump-has-pissed-away-the-pax-americana

The above article is complete nonsense and full of idealistic propaganda that bears no relation to the reality of post WW2 history or recent events.

The IMF, World Bank, UN and EU were set up after WW2 to increase the power and profits of American multinationals and international bankers.

The IMF and World Bank provide loans to developing countries or those in financial trouble. The money in these loans does not actually go to the countries involved because of the strings and conditions attached. The money is given to American multinationals to build something which invariably does not provide a good return on investment for the country involved and does not provide enough economic benefit to repay the interest on the original loan. The country involved eventually defaults on its loan repayments and is then forced by the IMF or World Bank to sell off some of its state owned assets to mostly American multinationals at a fire sale price.

This process keeps the developing countries poor while enriching American Corporations. See Confessions of an Economic Hitman for a more detailed explanation
www.amazon.co.uk/Confessions-Economic-Hit-Man-shocking/dp/0091909104

The World Bank has mostly operated in Africa and South America propping up a series of unsavory dictators in Africa (who took a cut of the money given to American multinationals) and the wealthy Oligarchy in South and Latin America, while keeping both of these continents poor and under developed.

The EU was set up, starting in the 1950’s, by former Nazis, international bankers, Bilderbergers & the CIA as a means to control Europe for the benefit of international bankers & American multinationals. It was deliberately designed to be undemocratic, being controlled by a clique of unelected bureaucrats (the Commissioners and Presidents) with laws determined by a Politburo (the EU parliament is just for show and cannot write or initiate any EU laws – just like the USSR’s Duma).

The EU – A CIA Covert Operation 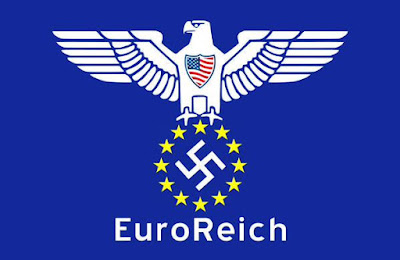 The CIA has carried out many Coups and False Flags within Europe (and elsewhere) to keep it under control – starting with Greece just after WW2 where a bunch of Generals who worked for the Nazis in WW2 were installed into power after the Greek civil war (1946 to 1949), and including such things as Operation Gladio where the CIA carried out a number of false flag terrorist attacks in Italy and blamed them on the communists
wikispooks.com/wiki/Operation_Gladio 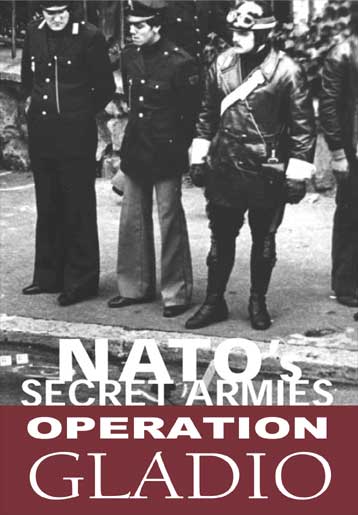 I do not know of any “liberal democracies” that have existed in Europe post the late 1960’s, perhaps someone would like to try and name one for me. The “liberal democracies” are actually fake democracies where the domestic population has very little influence over the government’s policies and the domestic politicians are all bribed by Corporations, Oligarchs and other Big Money interests to pursue policies that increase the wealth and power of the Corporations and Oligarchs.

From post WW2 there was a transfer of wealth and power from the Ruling Establishment Elites to an increasing populous Middle Class where ordinary people in Western Europe became much better off, but this process was reversed during the 1970’s and the percentage of income to the lower 95% started to decline and the income gained by the top 1% started to rapidly increase (this same process also happened in America where the process of wealth increases in the Middle Class started to reverse around 1971 when America effectively went bankrupt and Nixon took America off the Gold Standard and then there was widespread price inflation due to the 1973 to 1975 oil crises). 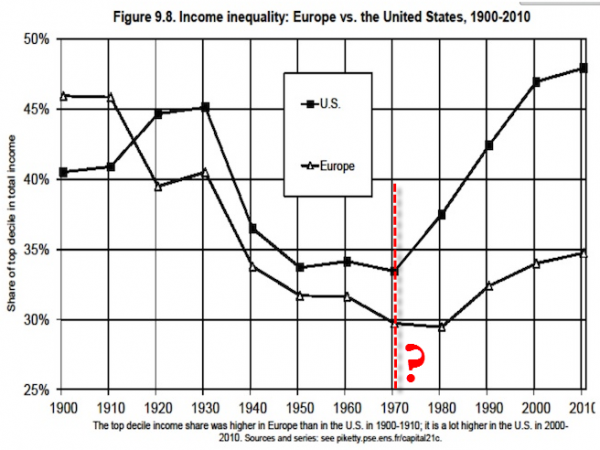 Switzerland is probably the best example of a “liberal democracy” in the world today. It holds regular national referendums on items of important domestic policy, is mostly governed through its 26 small cantons who decide most of its spending and taxes, spends very little on its military, and very little power and budget resides in the central Federal government. Switzerland has a very prosperous and large middle class (it is top 5 in the world for per capita income) is not a member of the EU and has never been subjected to a CIA coup or CIA control.

There has never been a “Rules based international order”. America and the UK governments have always operated an amoral Foreign Policy where “Might is Right” and nothing else matters. Any country that dares to step out of line and does not kow-tow to American government demands is demonized by the Western governments and media, is subjected to sanctions (economic warfare) and subjected to domestic agitation for Regime Change (see “color revolutions”) with large amounts of CIA (or more recently NED and “NGO” money) to fund internal domestic dissenters and provide propaganda for that countries domestic audience to push for “change”. If that doesn’t work the country in question is subjected to a CIA initiated armed insurrection and military operations by arming the “rebels” see Libya and Syria from 2011 or actual invasion (see Iraq 2003 or Guatemala in 1954). 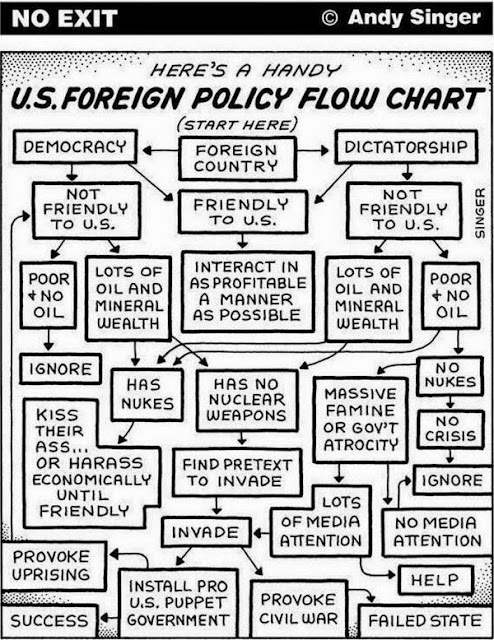 The first “color revolution” was carried out by the CIA in Iran in 1953 to replace the democratically elected government who wanted to take control of and benefit from its oil production instead of almost all of the profits ending up in the pockets of what is now BP. This CIA operation was called “Operation Ajax”

The system that the US set up after WW2 when America had around 70% of the entire world’s industrial production (because every other major industrialized nation had been devastated by WW2 (Germany, Japan, France etc.)) is now under threat because America is no longer the hegemony that it once was and now accounts for only 20% of World GDP. This has nothing to do with Trump as the author of the ridiculous Daily Beast Op-Ed article tries to insinuate – it started a long time before Trump got into power. 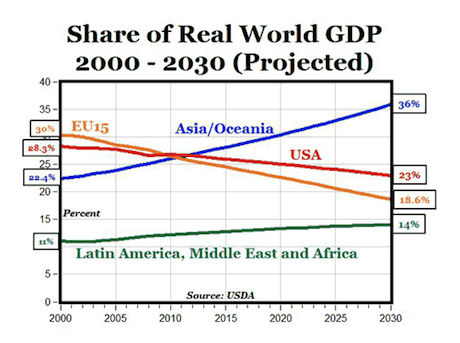 A whole series of events have taken place since the mid 1970’s that led to the decline in American economic power, mostly driven by the greed of large American multinational Corporations and an increasing population of billionaire Oligarchs who act in their own interests against the interests of America (and Europe) as a whole.

See e.g. the “financialization” of the American economy and the creation of half a dozen mega banks via take overs of smaller banks since the mid 1980’s. These banks now have enough power and wealth to control American economic policy because they have bought the politicians in the American government.

Other major factors draining American relative economic power are “Globalization” where American Corporations offshored their previously well paid labor force to China and India. The entry of China to the WTO in the 1990’s, the repeal of Glass-Steagall in 1999 which allowed the big banks to engage in unbridled speculation with derivatives, rehypothecation and risky loan “securitization”, the wasting of $7tn on the Neocon Wars which achieved nothing except recruiting more terrorists while fattening the profits of private American arms companies at US taxpayers expense.

The entry of China to the WTO in the 1990’s at the insistence of American multinationals allowed China’s massive economic expansion. China’s economy is now larger than America’s when measured in PPP (Purchasing Power Parity) and China is set to become far more powerful economically than America in the coming decades. 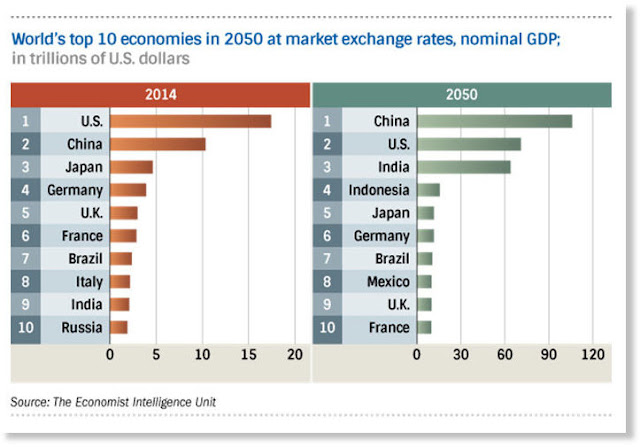 When the Op-Ed writer for the Daily Beast says “liberal democracy” is now under threat, what she actually unknowingly means is that the power and profits of American multinationals is now under threat because of the rise of China with Chinese mega corporations now starting to rival the size and power of American Corporations, China having significant control of large American corporations like Apple who have moved their production to China, and the Chinese/Russian plan to replace the US Dollar as the Global Reserve currency which threatens the power of the privately owned Federal Reserve and the mega American banks such as Goldman Sachs, JP Morgan, Citigroup and Bank of America who have all been frozen out of the Chinese market in favor of large Chinese domestic banks. 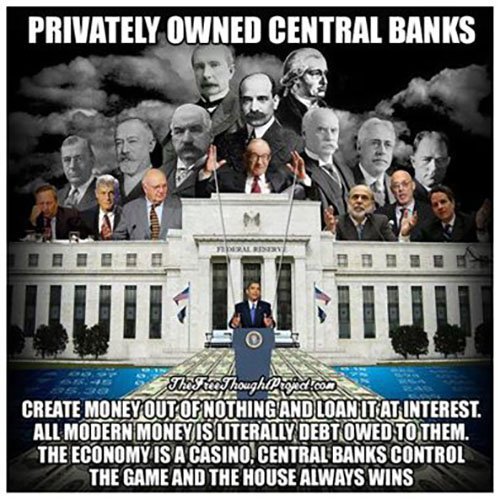 The replacement of the US Dollar as Global Reserve currency will mean the American government will no longer be able to coerce other countries with sanctions (economic warfare) as countries will trade using the replacement financial system currently under development by China and Russia in a non US Dollar currency.
Global Reserve currencies do not last for ever – their average lifespan is around 100 years and the US Dollar’s hegemony is now in its twilight years. 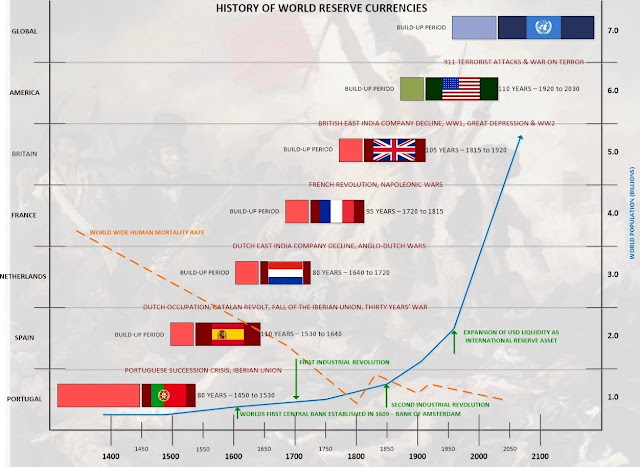 The Neocon policy of overt American aggression in Libya, Syria, Ukraine and Europe (with the expansion of NATO up to Russia’s border, the unilateral scrapping of the 1970’s ABM Treaty in 2002, and the building of first strike nuclear missile silos in Romania and Poland), threats to China in the South China Sea and THAAD missiles in South Korea directed at China, and now against Iran and Russia, has forced China and Russia to become joined at the hip partners for mutual defense and economic development.

See $36bn worth of new Russia to China oil and gas pipelines, AAIB development bank, OBOR (China’s One Belt One Road), SCO (Shanghai Cooperation Organization), the building of the alternative to the SWIFT payment system, over 100 non US Dollar trade deals signed by China and Russia with numerous countries (including Germany) since 2011 etc. etc. 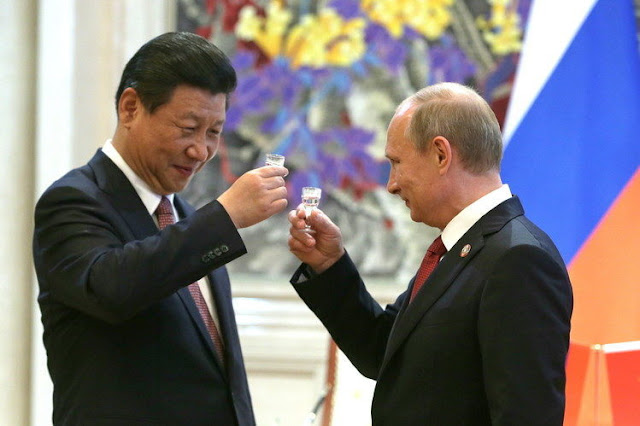 Russia has been being actively demonized and subjected to attempted Regime Change (see color revolutions and American Foreign policy above) since late 2013.

If anyone wants to understand more about Geopolitics and the changes going on in the world (and more importantly why) it is written up in a series of articles compiled in here
ian56.blogspot.com/2018/05/compendium-of-important-articles-on.html

The Daily Beast author is a lobotomized ignorant moron who has been brainwashed by Neocon Fascists, and is spewing idealistic Neocon propaganda nonsense. She should be completely ignored by anyone who wants to know the truth about what is currently going on (or by anyone who wants to understand post WW2 history).

The disinformation in the Op-Ed article is unsurprising – the Daily Beast is a Neocon Fascist propaganda rag whose managing editor Michael D. Weiss is an anti democracy, extreme Neocon Fascist and a long term supporter of Bill Kristol and the disastrous Neocon Wars, which have done so much to cause America’s decline since the installation of GW Bush and Dick Cheney’s Neocons into power in January 2001. 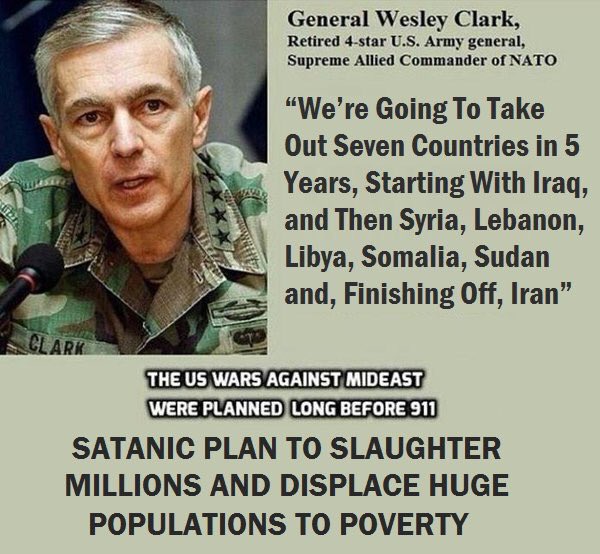 As a parting shot here is a quick preview of the US Airforce circa 2040.
It will be the only airforce America will be able to afford by then given the current trajectory (see the UK currently wasting over £50bn a year on its military while operating 2 new aircraft carriers that haven’t got any planes). 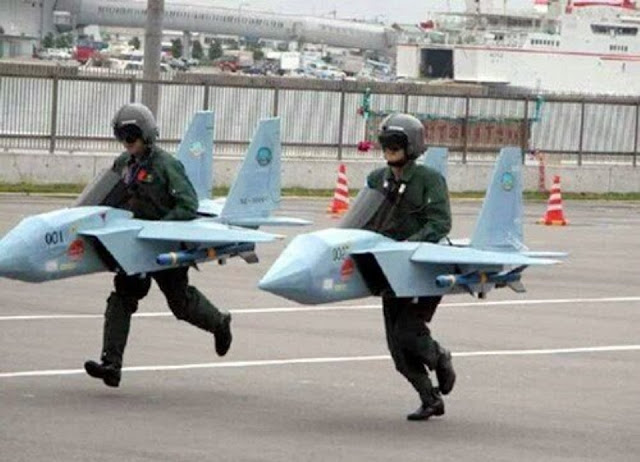