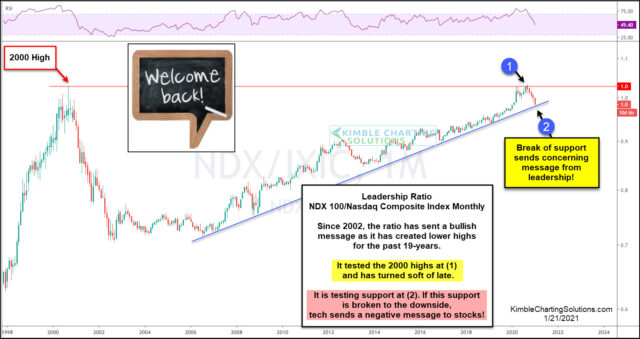 Headlines have varied in focus from the “4 horseman” to “FANG” and “FANGE”, but one thing remains: Large-cap tech stocks have been the bull market leader.

So what about when large-cap tech lags the market? Not so good.

In today’s chart, we look at a “monthly” chart of the performance ratio of the Nasdaq 100 Index to the Nasdaq Composite. It’s basically a look at how large-cap tech stocks perform against the broader tech stocks world.

As you can see, this ratio peaked out in 2000, bottomed in 2002, and has been in an up-trend ever since. That up-trend has been formed with higher lows, creating a trend line that has yet to be broken.

Are Tech Stocks About To Head Lower?

Last summer, large-cap tech’s out-performance pushed this ratio back to its 2000 high at (1) before turning lower. That turn lower has turned into several months of under-performance and has the ratio testing its bullish trend line support at (2).