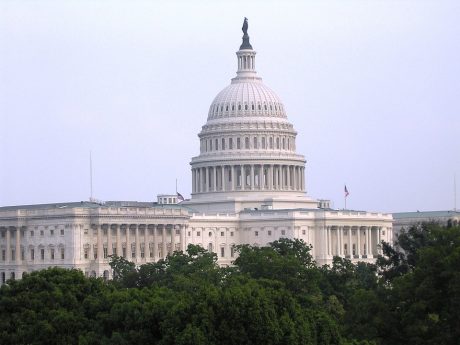 It is time to flush the toilet in Washington D.C., and I am so glad that Steve Bannon has decided to declare “war” on the Republican establishment.  For decades, these globalists have told us what we want to hear during election season, but then once they take office they betray us over and over again.  It is time to hold Republican members of Congress responsible for betraying the base, and I am so thankful that Bannon is organizing anti-establishment candidates into a cohesive movement.  We are going to challenge Republican incumbents all over the nation in 2018, and we are going to win over and over again.
Just look at what happened in Alabama.  The Republican establishment spent more than 30 million dollars against Roy Moore and we still won by a very wide margin.
Now we are going to take that template and repeat it all over the country.  During an interview with Sean Hannity on Monday,  Steve Bannon boldly declared that his forces are going after every Republican Senator that is up for re-election in 2018except for Ted Cruz…

On Monday’s edition of Hannity, Breitbart executive chairman and former Trump adviser Steve Bannon talked about his plan to challenge every Republican Senator up for re-election in 2018 in the primary, except Sen. Ted Cruz. Bannon said Republican incumbents have committed “economic hate crimes” against the “forgotten man.”
Bannon said he is declaring “war” on the Republican establishment and those that don’t back what President Trump ran on. He said there is a “new game in town” and promised to “cut off the oxygen” to Senate Majority Leader Mitch McConnell and stop his fundraising for establishment candidates. Bannon said any person running for the Senate in 2018 that wants his support must oppose McConnell as the Republican Leader.

I love this approach.  No matter how much the Trump administration tries to work with some of these globalists, the truth is that they are never, ever going to get on board with his agenda.
So the answer is voting them out, and that is going to take a lot of money and a lot of hard work.  Fortunately, it sounds like Steve Bannon is ready for the battles that are ahead.  Here is more from his interview with Sean Hannity…

HANNITY: Is this a fair statement: Is Steve Bannon declaring war on the establishment that are not for the working men and women in this country?
BANNON: 100%. We are declaring war on the Republican establishment that does not back the agenda that Donald Trump ran on and the president of the United States, and that’s the agenda we know that backs the working men and women…
Karl Rove, Steven Law, these guys should get the joke. Their donors are coming to us because they are tired of having their money burned up by trying to destroy people like Judge Moore. It’s a new game in town. We are to cut off the oxygen to Mitch McConnell. Mitch McConnell’s biggest asset is the money. We’re going to make it the biggest liability. We’re going after these guys tooth and nail.

This is music to my ears, because my campaign has already been trying to promote anti-establishment candidates here in Idaho and around the nation.  But obviously we need coordination at a national level, and Steve Bannon can do that.
And the environment is right for this kind of movement.  The Republicans in Congress have an approval rating that is so small that you can barely see it with a microscope, and the base is sick and tired of these so-called “conservatives” governing like Democrats.  The following comes from Rush Limbaugh…

Of course 2018 is just another stage in the war.  In order to boot all of the globalists out, it is going to take an extended period of time.  In fact, Steve Bannon says that he is ready to go to battle for the next twenty years…

If you are sick and tired of the Republicans in Congress getting nothing done, then I hope that you will join this fight.
Very few members of Congress are actively fighting for the things that the conservative base truly wants, and it is time to hold them accountable.  Next spring, Republican primaries will be held all over the nation, and the truth is that only a small percentage of the population actually votes in primaries.
If we get active and get mobilized, we can fundamentally transform Republican politics in this country.  If you live in Idaho, I would encourage you to get involved in my campaign, and if not I would encourage you to help the anti-establishment candidates in your particular state.
We are sick and tired of politics as usual, and the status quo is simply not good enough anymore.
Let me leave you with one final quote from Steve Bannon: “Nobody is safe. We are coming after all of them and we’re going to win.”

5 thoughts on “A ‘War’ Has Been Declared On The Republican Establishment, And We Are Going To Win”